Would you like to be part of a group that is trying to understand themselves, human nature and the world we live in better?

Would you like to have fun, companionship and recapture some of that loss of community that everyone seems to complain about?

And all this for free? In these cost-conscious times? Yes!

What the group will do:
Spend most of the meeting reading a play aloud with assigned parts in a supportive non-judgmental atmosphere (following the method of Dr. Gareth Morgan of the University of Texas/Austin Sunday Shakespeare Group)

What the group may do:
Watch films or recordings of the plays and attend performances at the Michigan Shakespeare Festival and Stratford
Set up Shakespeare reading groups in local prisons and schools

For updates, see Shakespeare Reading Group blog. Please call Prashant Andrade at 734-416-9834 or e-mail him at FEA_123@yahoo.com if you are interested.
Posted by Linda Theil at 5:02 PM No comments:

Thanks to Earl Showerman (who sent it to me in an E-mail), I am able to offer this link to a clip from the Colbert Report of 10/3/08 on Comedy Central: http://blog.indecision20008.com/2008/10/03/stephen-colbert-compares-the-candidates-to-shakespeare/
In this clip, Stephen Colbert compares McCain and Obama to Shakespearean characters in a very funny way. He then calls on our friend, Professor Stephen Greenblatt, to back him up on this.
I can only hope that Greenblatt eventually comes around to understanding the real Shakespeare as well as he seems to understand what Shakespeare would have thought of the current election.
You should all watch this clip (it's a little slow in loading so be patient).
Posted by Richard Joyrich at 7:28 PM No comments: 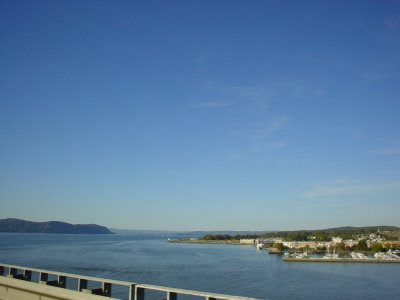 View from the Tappan Zee bridge


The White Plains SOS/SF authorship conference blew us away with over 20 presenters offering insights into Elizabethan history and authorship issues. Bonner Miller Cutting’s exhaustively researched paper on Shaksper’s will, Frank Davis’ meticulous analysis of Henslow’s diary, and Robert Brazil’s 70-page treatise on Angel Daye’s The English Secretary stand out for me.

Yet, despite the fun and fascination of a jam-packed schedule of outstanding presentations, the most exciting aspect of the 2008 SOS/SF conference was the powerful wind that blew through the authorship landscape. We blinked thrice and discovered our Oxfordian island had become a promontory, pointing the way to a brave new view of the world.

Mark Anderson’s keynote insisted that 1604 is the Oxfordian “ace in the hole”. No longer, said Anderson, must Oxfordians whimper apologetically about the unfortunate demise of our hero before all the plays had been written. Turn it around, he said, and ask instead why none of Shakespeare’s work includes reference to events or writing after the 1604 date.

"Shakespeare stopped writing in 1604, the year that Edward deVere died," Anderson said. The few potential exceptions that might be taken to his statement, Anderson defeated with ease.

Then John Plummer -- Anderson’s collaborator on a TV series based on Anderson's book, Shakespeare by Another Name -- took the floor and knocked us all for a loop with the high-energy thrill of his Oxfordian conversion. Ron Song Destro showed us his masterful “Oxfordian Lecture” – a first-look at the authorship question that Destro says has never failed to convert rooms-full of skeptical inquirers. And Cheryl Egan-Donovan talked about work on “Nothing is Truer than Truth” --  her film outing Shakespeare – with such confident passion that I sat awestruck in the crowded meeting room.

The common attribute of these young Oxfordians is their absolute faith in their view of the world – they believe in themselves and they believe in their work. They do not question that the world has changed; they simply act according to that change. The civil war has been won, and while liberty must always be defended, we will never be slaves again.

Or, as Mark Anderson said, "You owe it to yourself to look at the world through Oxfordian glasses."

Links of interest about (or recommended by) conference presenters:

List of books by Elizabethan historian Paul Hammer who was recommended by Bill Boyle. http://www.bookfinder.com/author/paul-e-j-hammer

A brief reminder that our meeting for this month is this Thursday, Oct. 16, at the Farmington Library on 12 Mile Rd. between Farmington Rd. and Orchard Lake Rd.

We will hear all about the joint 2008 Shakespeare Oxford Society/Shakespeare Fellowship conference which took place this past weekend at White Plains, New York. Oberon had six of our members in attendance. We will catch up on some of the impressive advances in Oxfordian research taking place. Looking forward to seeing you Thursday.

"Our agents are excited," Plummer said at the joint annual Shakespeare Oxford Society/Shakespeare Fellowship conference in White Plains, NY. "This guy's life (Edward deVere, 17th Earl of Oxford) is the entire Shakespeare canon and it's all true. It's the sexiest story, and it sells itself."

For a glimpse of the interaction between Anderson and Plummer, check out this recent entry on Anderson's blog.

Posted by Linda Theil at 1:46 PM No comments:

To help you get ready for UMS’s next stunning theatrical presentation, we'd like to make you a special offer for tickets to Richard III -- An Arab Tragedy.Direct from the RSC Complete Works Festival in England, this production is directed by the Kuwaiti-British director Sulayman Al-Bassam and is performed in Arabic with English supertitles. Be the first to see this thrilling contemporary adaptation of Shakespeare’s classic by taking $10 off tickets for the opening night performance on Thursday, March 19 at 8 pm in the Power Center. To order, call the UMS Ticket Office at 734-764-2538 or purchase your tickets online and mention the code DOUBLE HAPPINESS. Offer not valid on previously purchased tickets, or on tickets block D or E seats. Limit four discounted tickets per household. Offer expires on Wednesday, October 15.