I went to see Jim Jarmusch’s “Only Lovers Left Alive” last week at the Michigan Theater in Ann Arbor, where the film was showing in a limited USA release. Our readers may recall that Oberon reported on this film almost exactly a year ago when Jarmusch screened “Only Lovers . . .” at the 2013 Cannes Film Festival. In an interview in Cannes, Jarmusch and actor John Hurt -- who plays Christopher Marlowe in the film – expressed anti-Stratfordian views on the Shakespeare authorship question. For a video of this interview, see "Director Jim Jarmusch and actor John Hurt proclaim anti-Stratfordian views at Cannes Film Festival" dated May 30, 2013.

Jarmusch's film depicts Kit Marlowe as the true author of the Shakespeare canon, and the topic is not a sideline, as I had imagined from preliminary discussion, but is a key point of the film. In one of the film's few extended dialogues, the vampire Eve and her dear friend, fellow vampire, and sustenance provider Marlowe engage in a byplay wherein Eve tempts Marlowe to astound the world by revealing his authorship of the Shakespeare canon. "It would cause such thrilling chaos," she says.

I do not pretend to know what this very beautiful and slightly boring movie is about. Like a similarly gorgeous film, Alfonso Cuaron's "Gravity" that was released last year, the story is slight and the dialogue almost brutal in its truncated pointlessness. Yet these films are the frontline of culture and Jarmusch's inclusion of the Shakespeare authorship question documents the emerging vitality of this haunting issue that we, and others, find so compelling. 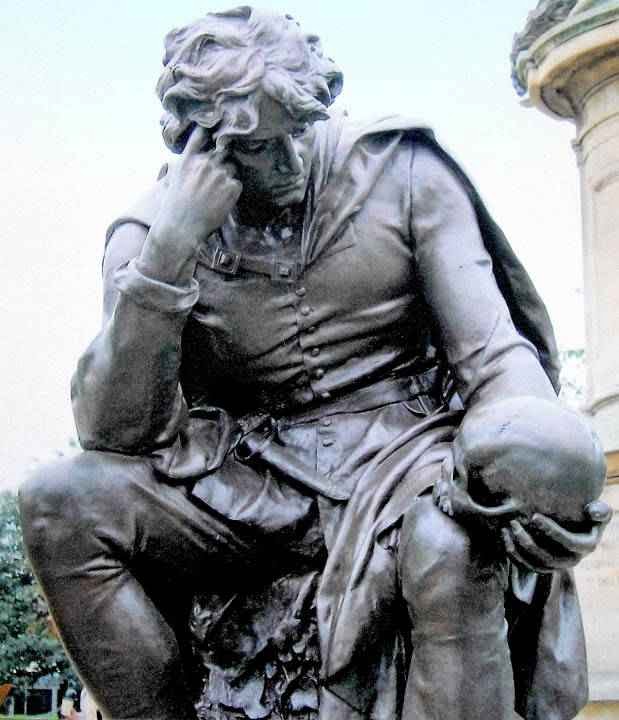 Neue Shake-speareGesellschaft (New Shakespeare Society) board member Hanno Wember reports from Hamburg, Germany that an article in the Travel section of the large circulation daily newspaper the Frankfurter Allgemeine Zeitung took a non-Stratfordian look at the spurious claims of the Shakespeare Birthplace Trust at Stratford-upon-Avon. The article titled "Das Ratsel des Getreindehandlers Will Shakspere" ("The mystery of the grain dealer Will Shakespeare") by Roland D. Gerste was published April 25, 2014. Wember said, "FAZ was strictly Stratfordian in recent years. Now this!"

The long, illustrated article criticizes the inauthentic aspects of the Shakespeare birthplace exhibits and discusses the fervor of the Stratfordian point-of-view (translation by Hanno Wember):


One does not have to be a supporter of obscure conspiracy theories nor, necessarily, as is Derek Jacobi -- an Oxfordian who assumes Edward de Vere, 17th Earl of Oxford, is the true author. It is enough to visit Stratford as a “doubter“, and to regard the visit as a trail in the contest of dogma and criticism. What a tingling sensation seizes the doubter when reading convoluted explanations to non-authentic exhibits! And how exciting to see the reactions of the official tourist guides, if you put those questions that are not well liked here! The faces of the mostly young employees of the Shakespeare Birthplace Trust fluctuate between irony, consternation and helplessness, sometimes even associated with a little aggressiveness as soon as they are faced with insubordination.

A translation of the article webpages is available from Google.