NPR covered the publication of Bob Dylan scholar Clinton Heylin's new book So Long as Men Can Breathe: The Untold Story of Shakespeare's Sonnets, yesterday  -- on the anniversary of the publication of Shakespeare’s Sonnets in 1609. According to the NPR report Heylin is a proponent of the theory that the sonnets chronicle a homosexual love affair between the author and William Herbert, Earl of Pembroke – one of the fraternal grand possessors of the 1623 first folio of Shakespeare’s works. Heylin comes at his subject from a Stratfordian perspective and is of the opinion that the sonnets were never meant for publication, like Dylan's "basement tapes". An excerpt from Heylin's book is posted on the NPR site.
Posted by Linda Theil at 8:46 AM No comments:

Email ThisBlogThis!Share to TwitterShare to FacebookShare to Pinterest
Labels: Clinton Heylin, NPR, Shakespeare's Sonnets, So Long as Men Can Breathe

Hello, Oberon!
Thursday's meeting will be a blockbuster.  Many great developments have been occurring lately which I am eager to share with the group. We will reminisce about the UNbirthday party and kick off planning for next year. Also, we will get a start on our observance of the 400th year of the Sonnets which were published in May, 1609.
Also, Richard is back from the Concordia conference in Portland, Oregon, ready to bring us up to date with what happened there.  And the two Toms will recount their merry adventure across the street at the Farmington Players.
Plus there is a good chance that we will be welcoming new members.
So Thursday can't come soon enough.  Same time, 6:45, same place, Farmington Library on 12 Mile Rd. between Orchard Lake Rd. and Farmington Rd.  See you there!
Tom Hunter
Oberon Chair
Posted by Linda Theil at 11:46 AM No comments:

"'Tis the god Hercules, whom Antony loved,
Now leaves him."
Antony and Cleopatra, Act IV, scene 3
Well, I don't know where Hercules went immediately after leaving Antony, but I know where he was this afternoon. He was with Prashant Andrade, who led us through a group reading of this play. With 42 scenes and over 40 speaking roles, it was certainly a Herculean effort to pull it off with only a few minor glitches. In addition to parceling out the roles to those in attendance (initially eleven in number), Prashant had to make quick alterations as four people found that they had to leave early.
I think we were all proud of ourselves that we tackled this play (which contains some of the most beautiful poetry and images in the works of Shakespeare) and came out on top.
Kudos again to Prashant.
Posted by Richard Joyrich at 5:41 PM No comments:

Kenneth Branagh joined the ranks of outspoken doubters this past weekend. He is quoted in the Sunday Express saying, "There is room for reasonable doubt. DeVere is the latest and hottest candidate." See the article at TopNews.

05/12/09 NOTE: Shakespeare Authorship Coalition Chairman John Shahan reported May 12 that an authoritative source said Branagh did not mean to indicate he was not a Stratfordian by his comments to the reporter.
Posted by Linda Theil at 12:34 PM No comments: 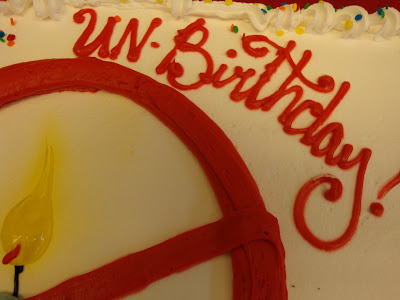 Dear Oberon,
A warm glow still persists from our Shakespeare UNbirthday party last Thursday, April 23, and it isn’t all from the candles on the UNbirthday cake or from the happy sight of Joy Townsend and Rosey Hunter providing atmosphere in their colorful Elizabethan costumes.
A near full house of celebrants watched as Ron Destro’s  “Who Really Wrote As Shake-speare?”  presented historical and literary reasons to doubt that William Shakspere of Stratford-Upon-Avon wrote the works of William Shakespeare, as well as reasons for Edward de Vere, the 17th Earl of Oxford as the true author.
The presentation was followed by a series of UNtoasts to Shakspere as the UNauthor and to April 23 as the UNbirthday (it is only a guess as to when Shakspere was born). Since we had neither glasses nor champagne, we imagined them, just as Stratfordians imagine biographical details of their man’s life, which are also in short supply. While we were at it, we imagined that the glasses were crystal and the champagne the finest available. We also remembered Supreme Court Justice John Paul Stevens whose finding for Edward de Vere had just been published by the Wall Street Journal. We didn't have to imagine Justice Stevens whose years of research and reading are very real and have produced a finding for Edward de Vere "beyond a reasonable doubt."
The program was received most favorably by all who attended, including a group from nearby Oakland Community College’s Adult Learning Institute who responded to the invitation of Oberon members George and Sharon Hunter (yes we are related!).  Spokesperson Del McPherson said that the ALI members were delighted with the program.  Even more gratifying, she has scheduled us to present it as part of her group’s well attended and well respected regular lecture series in October.
Del appreciated that the program presented interesting information about Shakespeare and did not make her or her companions feel pressured one way or another.  She particularly appreciated the idea that the identity of the author truly does matter and that in pursuing the topic, one could expect an even greater understanding and appreciation of Shakespeare.
Interest in the follow-up discussion included reasons why use of a pen-name by Shakespeare might have been desirable or even necessary; the nature of evidence which might have played a role in Justice Stevens’ decision; and Mark Twain’s common sense and insightful insistence that the experience needed to create Shakespeare’s works was sorely lacking from Stratford’s life.
Dr. Richard Joyrich told the group about the Declaration of Reasonable Doubt.  Many attendees appeared interested and took with them copies of the Declaration and directions for signing up.
There was a final toast, of course.  It was to the real Shakespeare whose works will live forever.
I do want to thank all of you who so graciously and generously contributed your time and efforts to making the UNbirthday party a success.  Now we are off to planning a special observance of the 400th anniversary of Shake-speare's Sonnets, published in 1609 by "our ever-living poet."
Thomas Hunter, Ph.D.
Oberon Chair
Posted by Linda Theil at 7:06 PM No comments: