Graduate students at the University of Michigan will perform opera and Shakespearean monologues in the McIntosh Theatre Thursday, December 3 (details below). Director Joshua Major had this to say about the event:


The performers are the 12 members of my Opera Workshop class - graduate level. Each will be singing an aria and the repertoire is varied, though there is a lot of Handel on the program. Each student was assigned a Shakespeare monologue and will be performing that as well. Unfortunately the arias and the monologues have no relation to each other, except that they are learning tools. Occasionally I am able to program thematically, or do a program of Shakespeare monologues  along with excerpts from opera scenes based on Shakespeare.

I have assigned Shakespeare over the years and found it to be a wonderful exercise on many levels. Understanding language, the acting process, metaphor, the relationship between word and music. It also unlocks and demystifies a world that is intimidating and foreign. The students end up adoring Shakespeare. I like that it pushes them out of their comfort zones as well.

And don't forget the student production of the Scottish play Thurs - Sun Dec. 10-13:

Oberon Chair Tom Hunter accepted the invitation of Michigan Shakespeare Festival Managing Director Robert Duha to present two pre-play, public talks during the 2010 festival season. Dates have not yet been set for the performance of Romeo and Juliet and Comedy of Errors next summer because the festival is currently negotiating for a new artistic director to replace John Neville Andrews. Duha said an announcement is imminent.

Duha reported that the festival hired David Blixt to create a 75-minute version of Romeo and Juliet that the company will tour in Jackson County high schools next April. Blixt is a Shakespearean actor, author of the novel Master of Verona, and founder with wife Janice Lee Blixt of A Crew of Patches Chicago-based, Shakespearean theater company.

Duha said the festival plans to repeat their annual high school monologue contest, and they hope to present the finalists at the festival for the first time this year. He also said the festival's new Marketing Director Sandra Xenakis plans to offer playgoing packages for holiday gift-giving. Packages will include tickets, dinner, and bed-and-breakfast accommodations for next summer's festival. For more information, check the website at Michigan Shakespeare Festival, email MSF@acd.net, or call 517-998-3673.
Posted by Linda Theil at 4:37 PM No comments:

For the first time ever (and maybe the last) an agenda for the upcoming Oberon meeting this Wednesday, Nov. 18, is included below. Just scroll down. This whole project is dedicated to Sue.

Here is inside information about what we will be covering Wednesday evening 7 p.m. at our usual room at the Farmington Hills library on 12 Mile Rd. between Farmington Rd. and Orchard Lake Rd.

It will be a packed and fast moving meeting which will include a special welcome to Robert Duha,  managing director of the Michigan Shakespeare Festival, who will announce a special place Oberon will have in plans for the 2010 MSF season.

We will conclude our celebration of the 400th anniversary of Shakespeare’s sonnets with a look into their personal nature by Tom Townsend and some perhaps surprising connections to Edward de Vere by yours truly.

We will also hear from our intrepid travelers back from the Houston Shakespeare Oxford Society/ Shakespeare Fellowship conference with news of the highlights and, if we are lucky, high jinks, you know the kind of craziness that breaks out when a bunch of Oxfordians get together.

And more. Much more, including a message from Supreme Court Justice John Paul Stevens.

ANYONE KNOW how to do conference meeting, e.g. so Robert

from Houston conference two weeks ago

Tonight we will conclude our celebration of the 400th

anniversary of Shakespeare’s sonnets which we began last

meeting with the conclusion of Tom Townsend’s presentation

and a hopefully brief presentation by me

News we should know?

Actor sat behind us on someone’s lap and took Rosey’s copy of LLL to follow along the dialogue; make LLL notes available

Upcoming Shakespeare:  MND at the Hilberry

with a book review by me

Linda, Ron, Richard, Tom T.: What impressed you the most/was the most important thing that happened at the conference or came out of it?

Any news from the national? Richard

How to use Declaration of Reasonable Doubt in Oberon activities?  Did nothing w/ it at LLL

You might by now have received in the mail or otherwise the latest edition of Somerset Mall's thick and glossy advertising magazine called Somerset Collection. On page 56, you will find a short article titled "The Bard is Back: In a society where old often becomes new again, a renewed fervor for Shakespeare" about Shakespeare's huge current popularity with a quote by yours truly as to why.  Reporter Taryn Bickley said:


Thomas Hunter, chairperson of Oberon, a Shakespearean discussion and research group in Orchard Lake isn’t surprised. “His universality and eternal themes – identity, love, ambition, and evil. His passion for understanding who we are, where we’ve been, and where we are going. Who could resist all of these?”


Ms. Bickley judiciously omitted the reams of replies I gave her to other questions, but she did mention Oberon, although she erroneously put us in Orchard Lake (instead of Farmington Hills). Notice also that she did leave the theme of identity in the quote probably having no idea of the can of worms we can make of it.

Your chairperson,
Tom Hunter
Posted by Linda Theil at 12:42 PM No comments:

This has truly been a busy month for Shakespeare studies. There is a lot of catching up to do, which we will be doing at our next meeting at the Farmington Library Wednesday evening Nov. 18.

In the mean time, we wish safe travels to our Oberon delegation to the annual conference to be held in Houston this year this coming weekend. We are looking forward to hearing reports from Richard, Linda, Ron and Tom at the Nov. 18 meeting.

Also, we will be rounding out our Sonnets celebration from last meeting.

And doing a lot of catching up, including our take on the UMS Globe Theater Love's Labour's Lost and an exciting development with the Michigan Shakespeare Festival.

Tom Hunter
Oberon Chair
Posted by Linda Theil at 9:08 AM No comments: 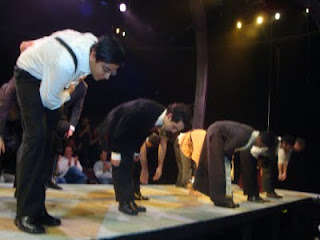 The University of Michigan's student acting troupe, The Rude Mechanicals, presented Shakespeare's Richard II in October at the Duderstadt Center Video Gallery. I arrived to a chaotic scene with ticket sellers turning away disappointed students. I asked if they would seat non-ticket-holders for no-shows before curtain-time, but was told it was hopeless. The mother of student director Jim Manganello presented me with a ticket and I donated money for cookies for the cast in Oberon's name. I am so glad I didn't miss this magnificent production.

120-150 patrons (estimated) were seated on risers on either side of a three-foot-high runway stage about 10 x 30 feet . (Measurements are guess-timates of size.) Sixteen- by four-foot-high screens hung behind both sets of audience risers showed projected images of moving humans and an industrial cityscape in black and white. Another block of 25 seats was placed in a view restricted space in front of the end of the stage to accommodate an overflow of patrons. Steel I-beams formed arches over the stage supported by flying buttresses. A large, carved-wood, pew-style bench sat at the far end of the stage.

A woman dressed like the courtiers in pants and shirt entered upstage shrugging into a brocade gown. Courtiers addressed her as “my liege” and the female King Richard -- played with complete aplomb by Alexandra Clement-Jones -- emerged to our view. This elegantly regal creature with razor-edged diction and a muscular command of the stage inhabited the king with a strength that made gender superfluous.

Their stagecraft was superb. The death of Richard’s favorites was accomplished with intense music and an explosion of red paper that fell into the audience like gouts of blood. Choreographed movement throughout the play added to the sense of pomp and gravity. Performers leapt from the stage, using the space in front of the seats as a performance area as well.

I have seen the Royal Shakespeare, the Globe, the Guthrie, the Canadian Stratford, and various other fine companies, but this performance was by far the most clear, authentic and exciting Shakespearean experience I’ve ever had -- except for my very first time at age 15 seeing Julius Caesar at Carnegie Institute of Technology (now Carnegie-Mellon University). I’m beginning to think that only the young are passionate enough to fulfill Shakespeare.

I spoke to composer Marc LeMay after the curtain and asked if he would be interested in speaking to Oberon about their production and he graciously said he would be interested in doing that. I also asked about getting a copy of the recording taken of the performance and he seemed to think this would be possible, too. I long for that video. I wish everyone could have that experience.

Posted by Linda Theil at 2:53 PM No comments: