About two weeks ago, I went with friends to the Coolidge Corner Theater in Brookline, MA, one of several Boston cinema venues for Shakespeare plays:

All have telecast events there and worldwide. We wanted to see the re-broadcast of the joint BBC and Royal Shakespeare Company celebration entitled "Shakespeare Live!" which promised a feast: extracts from various plays as well as music, operas and ballets inspired by Shakespeare. The place was packed, largely but not exclusively, with grey heads.

The performers -- actors, musicians and dancers -- were all good to excellent. With Miren, Dench, Suchet, Cumberbatch, McKellen, Fiennes, and more; how could it go wrong? the short scenes were alternatively funny and moving, but the hosts, David Tennant and Catherine Tate, were uninspired and as predictable as show hosts at one of those self-congratulatory, Hollywood, fund-raising galas, or life-achievement award ceremonies. And the guide on the obligatory and reverent walk through Shakspeare's birth room and courting cottage -- evoking Will’s and Anne’s “sweet nothings”, I kid you not! -- was pure cant.

The presence of Prince Charles in the audience and -- briefly and somewhat awkwardly -- on stage, was a reminder of the might and imperviousness of the Stratford establishment, especially when they cunningly enlisted John of Gaunt's stirring "sceptered isle" speech to defend the fortress.

Not everything was as intimidating, though. We were treated to a huge neon portrait of the Bard -- based on Droeshout, of course -- lighting up bright and blue at the back of the stage, toward which the performers all pointed and bowed at the end, in worship. It was embarrassing to watch.

And also obnoxious: we were so transparently being admonished “This is the man; don’t you ever doubt it!”. But then, why the urge to admonish if there is really no doubt? 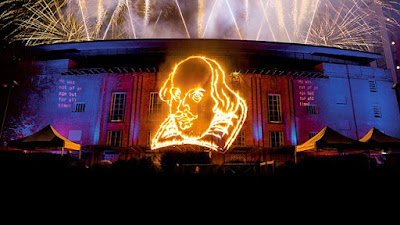 The same outline Droeshout portrait lit up with fireworks outside at the closing of the broadcast. Who needs Disneyland when we have Stratford?

Overall, this show left me with a weird sense that the Stratford story is dying and that the Stratfordian organizers dimly know it. Whatever power the performance had for me came from Shakespeare's words; the fluff around them was corny and kitsch.

It was tired. It was weak. It was pathetic. It was desperate.

I don't think it is only wishful thinking on my part: one of my friends had the same visceral reaction -- halfway between a cringe and a chuckle. Both the Stratford and Boston audiences clearly seemed to enjoy the various performances; it is impossible to know if they experienced the same unease.

Reviews from the United Kingdom were predictably laudatory:
But, I left the theater vaguely nauseated and embarrassed for the actors, nagged by the sense that something was amiss in the celebration, by a silent undercurrent, a dissonance I cannot quite name, and almost sad for the ordinary Stratfordians-by-default who don't know yet their man is already dead, who can’t see what's coming and are missing all the fun and excitement of the hunt for the true author. 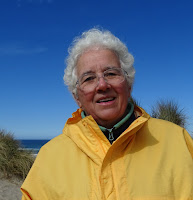 Did any other masochist among you see that show? Am I the only one who heard the bells toll? Am I deluded in seeing a feeble last hurrah where others saw a triumph?