I just spent a very enjoyable afternoon at the Beinecke Rare Book and Manuscript Library (shown above) at Yale University. This is an incredible building (the picture doesn't do it justice). I am amazed how all of these very rare books are displayed so openly (albeit in climate controlled areas behind unbreakable glass) instead of the fabled vaults of such institutions as the Folger or the Huntington.

This library is currently doing an exhibition called "Remembering Shakespeare" until June 4, 2012 and I would urge anyone who is able to do it to go see it. More information is available at http://library.yale.edu/beinecke

The exhibition explores how Shakespeare came to be remembered as the "world's most venerated author". It was curated by Professor David Kastan of the English department at Yale and by Kathryn James, the Beinecke Library curator.

There are an amazing number of items in the exhibition, including two First Folios, copies of the Second, Third, and Fourth Folios, quarto editions of most of the plays, and copies of the Sonnets, Venus and Adonis and Lucrece. There are also copies of many other plays of the time, listed as "collaborations", but which many Oxfordians see as the work of Edward de Vere.

Then there are multiple items regarding how Shakespeare has been seen throughout history, including a (somewhat snide) small section on "Denying Shakespeare" which includes Delia Bacon's book and a letter to her from Nathanial Hawthorne urging her to publish the book, as well as a copy of Twain's Is Shakespeare Dead.

Of particular interest to me was a sample of some of William Henry Ireland's celebrated forgeries, conceived in a desperate need to show that there was SOMETHING in the life of William of Stratford that could link him to the plays that bear his (or a similar) name. These were presented in combination with Edmund Malone's disappointed (but scholarly) proof of the false nature of all of it.

There was a nice section on Charles Dickens and his relationship to Shakespeare (but omitting the fact that he was a "doubter" of Shakespeare's identity).

There was a big section on David Garrick's Stratford Jubilee of 1769 and the impact that had (the beginning of Bardolatry).

There were copies of many of the source texts of Shakespeare. There were 19th century political cartoons based on the works. There was Samuel Johnson's Dictionary, based heavily on Shakespeare's use of the language.

I could go on and on, but let me just say that this is a one-of-a-kind exhibition and I am very glad I was able to see it.

Posted by Richard Joyrich at 10:05 PM 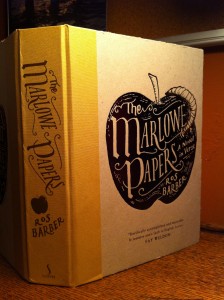 Book photo courtesy of Ros Barber
The Marlowe Papers: a Novel in Verse by poet Ros Barber proposes Christopher Marlowe as the author of the Shakespeare canon. The book will be released as a Kindle ebook in the US on May 25, 2012 and will be published in hardcover by McMillan's St. Martin's Press in January 2013. The UK hardcover edition published by Sceptre is available now on Amazon.co.uk. The Marlowe Papers was reviewed as  "Bard Times: this novel in subtle verse will make one look back in wonder at an era of riddles, disguises, allusions and concealments" by Suzi Feay in the May 19, 2012 edition of the Financial Times/London. Feay says:


It’s enough to strike despair into the heart of James Shapiro, author of Contested Will, as well as the hearts of all the other Shakespeare experts who refute the so-called “authorship controversy”. This novel, written entirely in fast-moving iambic pentameter, embellishes the notion that Christopher Marlowe wrote the Shakespearean canon after falsely being declared dead in a Deptford brawl.

The fiction work is part of Barber's doctor of philosophy thesis on Marlowe. Her doctorate was granted by the University of Sussex in May 2011. A text of the critical component of her thesis is available online at http://rosbarber.com/research/dphil-phd-thesis/


Barber's views may be seen in a 45 minute video available online at http://www.sussex.ac.uk/mtl/video.php?id=72. A quote from her website at http://rosbarber.com/research/ characterizes her viewpoint in this manner:


[Dr. Barber] argues for a return to the first principals of historical research, a critical re-examination of evidence, and an appreciation of the extent to which our existing beliefs filter our perceptions of what is 'true'. Beyond the ostensible subject, it emphasises the necessity of encouraging students to ask questions, rather than supplying them with answers.

Last November (2011) Barber wrote in her web log about Emmerich's Anonymous, Roe's Shakespeare Guide to Italy, Prince Charles's confusion over the nature of evidence, and her view of the authorship question:


To question the authorship of Shakespeare has long been an academic taboo, and the whole thrust of my research has been to argue that it is a taboo that needs to be broken.

The Marlow Papers will be launched May 29, 2012 at the British Library where Dr. William Leahy will join Barber and Will Self in discussion. More info here:  http://www.bl.uk/whatson/events/event130838.html

As you may be aware, Oberon meets the fourth Monday of the month as a rule. However, this month there is a holiday on that day (Memorial Day) and the library would prefer to be closed. Therefore, we will be meeting a week earlier, that is, this coming Monday, May 21.

The place and time are the same as usual (6:45 PM at Bloomfield Township Library 1099 Lone Pine Road [corner of Lone Pine and Telegraph]).

We will have a great time (as we always do). If you were at the last meeting (our Un-Birthday Party) you will recall that we began playing Oxfordian Jeopardy, but we only had time to play the first round. So we will plan to play Double Jeopardy and Final Jeopardy. The questions will be very challenging.

I will also be prepared to discuss some of the highlights of the recent Authorship Studies Conference held last month in Portland, Oregon.

We will discuss plans for an Oberon "road-trip" to Stratford, Ontario.

And of course we will be able to impart any news or exciting developments that we have become aware of in the last month (or earlier).

Don't miss this meeting or you will be sorry.

See you there,
Richard Joyrich
Posted by Linda Theil at 8:42 AM

Novelist and anti-Stratfordian Michael Prescott posted a thorough and enlightening review titled "Shreds from the Whole Piece" of two new books about the Shakespeare apocrypha --  The Apocryphal William Shakespeare, by Sabrina Feldman and North of Shakespeare by Dennis McCarthy -- on his blog May 1, 2012. I posted comments about Prescott's comparison of Shakespearean quartos with modern paperback books that I have copied here because I think the common comparison of sixteenth century quarto publications to twentieth century paperbacks is emblematic of the anachronistic mindset that hampers a true understanding of the entire Shakespeare authorship question. The entire exchange along with his outstanding post on the Feldman and McCarthy books is available on Prescott's blog at http://michaelprescott.typepad.com/michael_prescotts_blog/2012/05/shreds-from-the-whole-piece.html.


Linda Theil posted to http://michaelprescott.typepad.com/michael_prescotts_blog/2012/05/shreds-from-the-whole-piece.html May 3, 2012:


. . .  May I take objection to your characterization of the quartos as comparable to supermarket paperbacks? Comparing the quartos to twentieth century paperbacks is a common analogy that suffers from anachronistic thinking. Considering the quartos in the same terms as modern paperbacks provides an inaccurate view of the value of the quartos and by extension an inaccurate view of the market for these quartos. While it is a difficult process to analyize the cost of goods in varied times and places, using value equivalents can be useful. In this example, a modern paperback is sold for about the cost of one-hours work by an unskilled worker or $7 to $10. A Shakespeare quarto was sold for about 8 shillings which was the weekly wage for a skilled worker, such as a joiner -- an equivalent cost today of hundreds of dollars. This is a vast difference in value. Comparing a quarto to modern paperbacks also gives the impression that the quartos were an important part of the contemporary meme, like a best selling novel or an enormously popular TV show in the twentieth century, but the limits of communication in the sixteenth century make any such comparison inaccurate. I don't know how to imagine the quartos as a cultural phenomenon, but I'm pretty sure they have nothing in common with paperback books. In my opinion, the whole issue of the Shakespeare authorship suffers greatly from our human inability to set aside our comprehension of the world as we experience it, in order to understand the world as it was in the past.

Linda Theil posted to http://michaelprescott.typepad.com/michael_prescotts_blog/2012/05/shreds-from-the-whole-piece.html May 4, 2012:


... regarding the cost of a quarto, I agree that reasonable people might come to different conclusions. I don't know where Wikipedia comes up with a pound in Elizabethan money being equivalent to $200 current American, but I understand that some historians consider the issue of equivalence to be the most useful in determining the cost of things in various times and cultures. Some historians base this equivalence on the cost of a loaf of bread which in Elizabethan times I understand to have cost a penny. If you accept that the cost of bread today is between $4-5, you might consider that a penny in Elizabethan times is the equivalent of $4 today. Even if a quarto cost only a shilling (a low-ball figure, from the information I have seen) an Elizabethan would have had to pay the price of twelve loaves of bread to purchase a quarto (or $48 -50 in current currency)-- much more than the cost of a paperback book.

I think the value of goods is a very interesting topic in itself, but I do not insist that my understanding of the value of a quarto is correct. I only wish to offer the opinion that comparing Elizabethan quartos to modern paperbacks is an inaccurate simile. I believe the simile is inaccurate on more than one level as I indicated in my original post, and which you seem to support in your acknowledgement of the small print runs. I believe the simile is inaccurate, also, because the psychology of Elizabethan communication is not accessible to modern humans: i.e. we no longer understand the way a society functions when speed of communication is measured in weeks instead of seconds.

For these and other reasons (literacy rates, for example) this comparison of quartos to paperbacks is common and emblematic of an anachronistic view of the Elizabethan world that hampers real understanding of the era and its art. This easy acceptance of an easy answer to a complex topic -- an answer riddled with unfounded and untested assumptions -- is also emblematic of the entire Shakespeare authorship question. . . .