Oberon Shakespeare Study Group Yearbook 2015
By edited by Linda Theil
Our 2015 Oberon yearbook is now available from Blurb. The yearbook contains all Oberon web log posts from 2015. An ebook version of the 2015 yearbook is available at no charge from Blurb at
http://www.blurb.com/ebooks/p2f5b1d67bc9fe016836a .

Order a hard copy from the Blurb print-on-demand catalog at
http://www.blurb.com/b/6927574-oberon-shakespeare-study-group-yearbook-2015.

The 2015 yearbook contains a tribute to Oberon member Thomas George Hunter who passed away last year, an interview with noted author Ros Barber, information about Oberon activities, and articles about notable Shakespeare events in 2015.
Posted by Linda Theil at 12:59 PM 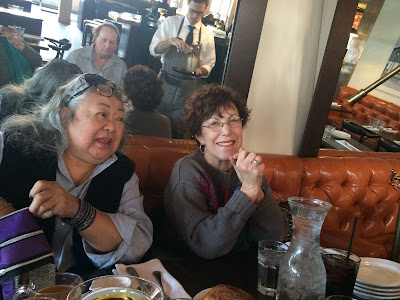 A small group of Oberons met on a frigid Saturday in Michigan this past weekend, and after a fruitful meeting at the Bloomfield Twp. library we adjourned for dinner at Beau's on West Maple Road and Telegraph in Bloomfield Hills, where we always have a good time. (See Rosey and Mara, above.) 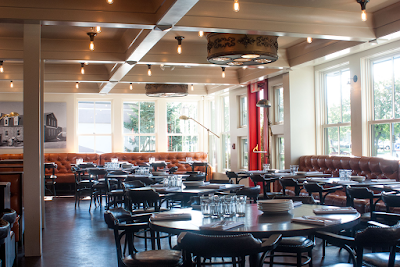 Beau's on West Maple and Telegraph in Bloomfield Hills, MI

First Folio at DIA
At the meeting we discussed plans to attend the Folger's First Folio exhibition running from March 2 - April 3 at the Detroit Institute of Arts with supporting programs at Wayne State University including a free academic conference "Shakespeare and his culture on the stage and on the page" on March 10-11 featuring David Bevington as the keynote speaker at 12:45 p.m. March 10,2016 in the Bernath Auditorium on the Wayne State campus.

Shapiro in Stratford
We also discussed a trip to the Shakespeare Festival in Stratford, Ontario on June 18 to hear Year of Lear: 1606 author James Shapiro speak on the topic of "The Scottish Play" at 10:30 a.m. in the Studio Theatre as part of the Festival Forum series of lectures. Tickets are $20 Canadian.

Antoni Cimolino joins preeminent Shakespeare scholar, James Shapiro, whose most recent book The Year of Lear: Shakespeare in 1606 shows how current events in England in 1606 affected Shakespeare and shaped the three great tragedies he wrote that year - King Lear,Macbeth, and Antony and Cleopatra, in conversation about Macbeth and equivocation.

In preparation for the event, Oberon chair Richard Joyrich encouraged members to download a copy of Contested Year: Errors, Omissions and Unsupported Statements in James Shapiro's "The Year of Lear: Shakespeare in 1606" a Kindle book available on Amazon.

John Dee in London
Oberon member Robin Browne, reporting from a December trip to London on an exhibition of "The lost library of John Dee" now on exhiibt at the Royal College of Physicians through July 29, 2016.

For readers who are not traveling to London, the website has several films on the exhibit available online:

Hooray Robin Brown who brought us Elsa!
On April 23, Robin will attend a reception at the San Francisco Green Film Festival honoring the fiftieth anniversary of the film, Born Free (1965). Robin served as camera assistant on the 1963 shoot in Africa. He will join the three surviving participants in the film: actress Virginia McKenna, sound engineer John Hall, and Bill Cartlidge on the production crew.

Essex trial in Ann Arbor?
Robin also mentioned that he heard the University of Michigan library system ha an original copy of the transcript from the year 1600 trial of Robert Devereaux, Earl of Essex. I have made some inquiry, but have only found this link of a 1679 publication.

The arraignment, tryal and condemnation of Robert Earl of Essex and Henry Earl of Southampton, at Westminster the 19th of February, 1600 and in the 43 year of the reign of Queen Elizabeth for rebelliously conspiring and endeavouring the subversion of the government, by confederacy with Tyr-Owen, that popish traytor and his complices ... were the 5th of March ... arraigned, condemned, and executed ... 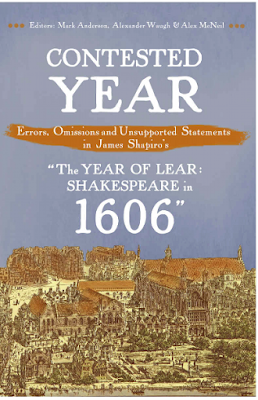 Fed up with the slavish syncophants pouring butter over the head of Columbia University professor James Shapiro in adulation of his newest Shakespeare bio, The Year of Lear: Shakespeare in 1606 (Simon & Schuster, 2015); Mark Anderson, Alexander Waugh, Alex McNeil, and cohort published an annotated rebuttal of the Shapiro oeuvre.

The new book is titled Contested Year: Errors, Omissions, and Unsupported Statements in James Shapiro's The Year of Lear, and it is available as a Kindle ebook from Amazon for 99-cents with proceeds going to the Shakespeare Authorship Coalition, The DeVere Society, and the Shakespeare Oxford Fellowship.


Despite Shapiro's many claims in The Year of Lear, not only is there no evidence that Shakespeare wrote King Lear in 1606, but there's no credible evidence the author of the plays was even alive in that year!