Harper's calls de Vere poem " . . . one of the true masterpieces of the Elizabethan era"


This poem is one of the true masterpieces of the Elizabethan era, understandable on many levels: as a sanctuary of conscience, as a statement of Calvinist precepts, as a dissertation on contentment, as a praise of the powers of imagination and invention. William Byrd’s setting of the Oxford poem is one of the finest English art songs of the Elizabethan era. A number of excellent recordings exist, but there is as yet nothing posted to YouTube. Of the recordings, the performance of the inimitable Emma Kirkby, on this Fretwork CD is surely the best.

Harper's Magazine has published articles on the Shakespeare authorship question including an article by Charlton Ogburn in 1972, and in April 1999 the magazine devoted an entire section titled The Ghost of Shakespeare to the topic.

Email ThisBlogThis!Share to TwitterShare to FacebookShare to Pinterest
Labels: Edward de Vere, Emma Kirkby, Fretwork, Harper's Magazine, My Mind to me a Kingdom Is, William Byrd


At last night's Oberon meeting incoming Shakespeare Oxford Society president Richard Joyrich reported that Richard Paul Roe had been named Oxfordian of the Year 2010 at the joint Shakespeare Fellowship/Shakespeare Oxford Society 2010 joint annual conference. A delegation from the conference had traveled to Roe's home in Pasadena, California to make the presentation previous to the public announcement at the conference banquet September 19, 2010 that Roe was unable to attend.
On April 9 this year Roe was honored when the Shakespeare Authorship Research Center at Concordia University in Portland, Oregon was named the Richard Paul and Jane Roe Shakespeare Authorship Research Centre. The center director, Daniel Wright, PhD, said:

The gifts bestowed by this revered colleague and his wife, in sums totaling almost half a million dollars, have gone far to make the institutionalization of the Shakespeare authorship inquiry — in a permanent, academic, and non-political setting for the benefit of scholars on this campus and worldwide — a reality.

In June, Roe privately published his life work, The Shakespeare Guide to Italy, and distributed the book among friends and colleagues. On September 14, Wright announced that the book would be published next year by Harper Collins. Although initial reports gave April as a publication date, conference attendees reported that the date had been changed to November; but this writer has been unable to confirm a publication date with the publisher.

Roe's work is highly esteemed among alternate authorship advocates and the publication of his Italian research is a greatly anticipated event. Congratulations to Roe on his achievement.
Posted by Linda Theil at 12:54 PM No comments:


Yeah, I was on the set the whole time. It was an incredibly moving thing. I first learned about the issue 20 years ago, so to see this thing that I started to think about 20 years ago, take shape with an incredible group of actors and technical crew and Roland [Emmerich], it was really quite moving for me to see it come together. We had this amazing cast, and I’m really excited about it.

Orloff gives a lot of insight into the background of the film; the interview is fascinating to an authorship agnostic.

Source: http://www.collider.com/2010/09/22/anonymous-interview-john-orloff-screenwriter/
Posted by Linda Theil at 1:54 PM No comments:


Sony has moved Roland Emmerich’s Anonymous from March 25, 2011 to September 23, 2011.  The period-drama is based on the controversial notion that Edward de Vere, the 17th Earl of Oxford, wrote the plays that were attributed to William .

Posted by Linda Theil at 9:16 AM No comments:

Several Oberon members are heading west this week to attend and present at the annual Shakespeare Fellowship/Shakespeare Oxford Society conference in Ashland, Oregon. The conference was heralded in the local press with an article by reviewer Bill Varble that appeared today in the Ashland Daily Tidings and the Mail Tribune. Varble said:


On a day in mid May of 1575, a powerful 25-year-old English nobleman named Edward de Vere landed in Venice in northern Italy. One of the foremost cultural and mercantile cities in the world, Venice would be the young man's base for almost a year and a half of travels, after which he would return to England, where, according to some, he spent the rest of his years producing the works of Shakespeare.

09/22/10 NOTE: A syllabus of the SF/SOS 2010 conference in Ashland, Oregon is available at
http://www.shakespearefellowship.org/conference2010/syllabus2010.pdf
Posted by Linda Theil at 2:33 PM No comments: 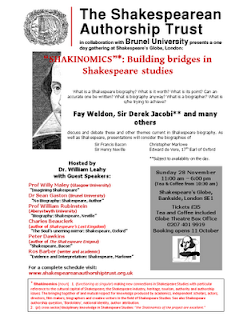 The Shakespearean Authorship Trust -- headed by chairman Mark Rylance -- in collaboration with Brunel University will hold a one-day conference at Shakespeare's Globe in London from 11 a.m. go 6 p.m. Sunday, November 28, 2010.
The topic of the gathering is "Shakinomics: Building bridges in Shakespeare studies". The group defines Shakinomics as: making new connections in Shakespeare studies with particular reference to the cultural capital of Shakespeare; the Shakespeare industry, heritage, tourism, authority, and authorship issues. The bringing together of and mutual respect for knowledge produced by academics, independent scholars, actors, directors, film makers, biographers, and creative writers in the field of Shakespeare studies.
Brunel's Dr. William Leahy will host guest speakers:
Prof. Willy Maley of Glasgow University
Dr. Sean Gaston of Brunel University
Prof. William Rubenstein of Aberwstwyth University
Charles Beauclerk
Peter Dawkins
Ros Barber
and Fay Weldon and Sir Derek Jacobi (if available).
A flier including complete information about the event is available on the SAT website at:
http://www.shakespeareanauthorshiptrust.org.uk/pdf/flyer1110.pdf
Posted by Linda Theil at 11:48 AM No comments:


The purpose of the [Knowledge Center] article was not to prove that Shakespeare of Stratford wrote the plays, which frankly I don’t care about either way, but to point out that the essential grounds for doubt are flawed, and that creative biography is in many ways to blame, and that the debate cannot be resolved on these terms.


Your individual points have all been answered by wiser heads elsewhere, I’m more interested in the ideological questions.


If you mean by ‘dodged every issue’ that I’ve pointed out the fundamental methodological flaws in the argument rather than attempting to deal with every individual detail, then you’re absolutely correct, and have understood the purpose of the article.

The specific "individual detail" that Kirwin was uninterested in, is the literary sources of Shakespeare's plays which Kirwin dismissed with his fantastical invention of a pre-electronic, info-dump available to all Elizabethans -- similar, no doubt, to Ann Arbor's forthcoming community cable. On this topic, Kirwin said in his 14:28, Aug 28, 2010 post:


Finally, your complaint about sources is a) wrong (most of the sources of Shakespeare’s plays were available in English or Latin, both spoken by yer average grammar-school educated child) and b) reductive – the intertextuality of the period means that books, translations and ideas circulated freely. The most popular play performed on the Jacobean stage, A Game at Chess, was a complex political allegory about English/Spanish relations of a sophistication that an equivalent crowd today would simply not be able to grasp. This stuff was part of everyday conversation.

Kerwin's proclaimed indifference to his topic, reliance on "wiser heads", disregard of "individual detail", and invention of undocumented Elizabethan circulating libraries make him appear a less than rigorous researcher; yet, the bio attached to his Knowledge Centre article proclaims his work at the heart of academe in Shakespeare studies:


Peter Kirwan is a doctoral researcher at the University of Warwick, where he also completed his undergraduate and Masters degrees. He is part of a team led by Prof. Jonathan Bate preparing a new edition of "Collaborative Plays by Shakespeare and Others" for Palgrave MacMillan/The Royal Shakespeare Company. His doctoral work looks at early modern collaborative authorship, textual culture and repertory practice, and at later cultural appropriations of Shakespeare. He is also an established theatre reviewer and a tutor in the Department of English.

Shakespeare authorship inquirers should pay attention when a traditionally inclined academic proclaims his or her indifference to the authorship question because it is a refrain that is repeated more and more frequently and its ubiquity signals a movement in the status of the authorship question among Stratfordians. Their "I don't care." comments represent the second stage in the psychology of mind-changing following this progression: