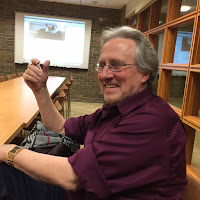 David Montee, PhD, is the director of Interlochen Center for the Arts April 21, 22, 23, 2017 production of Gregory Doran's version of Cardenio, a lost play attributed to John Fletcher and William Shakespeare. In this post, Montee shares his program notes on the history of Shakespeare's "lost play". Montee recently became a signatory to John Shahan's "Declaration of Reasonable Doubt about the Identity of William Shakespeare." LT, ed

1564—1616:  William Shakespeare’s life and career.
1623:  The first publication of Shakespeare’s collected plays, the First Folio.
1727:  Theatre entrepreneur, playwright, and Shakespeare editor Lewis Theobald announces that he has found and purchased “at considerable cost” three copies of a manuscript of a hitherto unknown Shakespeare play.  He announces plans to produce the play (slightly adapted to suit the tastes and sensibilities of his current audiences) at the Drury Lane Theatre. The play opens successfully in December of that year.  The plot of the play roughly follows a sub-plot of Don Quixote found in Book One of that novel that details the narrative of the madman Cardenio, whom the errant knight of the novel’s title encounters in his various wanderings; but all the major characters’ names have been changed.  (By Theobald?) As the play involves delicate subjects (for the early 18th Century, anyway), there appears to be substantial evidence of Theobald’s morally conscientious editing, as key scenes in the story seem to be missing—such as Dorotea’s rape by Fernando.
1728:  The play is first published under the title of its Drury Lane adaptation, seeing print in January under the title Double Falsehood; or The Distressed Lovers. Although successful with the general public, it is subsequently attacked as a fraud by Theobald’s peers, led by rival Shakespeare editor (and adaptor) Alexander Pope.
1733:  Theobald publishes his edition of the Complete Works of Shakespeare, following the contents of the First Folio of 1623; he does not include Double Falsehood. In a Second Preface to Double Falsehood, he seems to suggest that he now believes the play was (perhaps) not written by Shakespeare, but instead by John Fletcher.
1744:  Lewis Theobald dies. There is no specific accounting of the fate of his three “manuscripts”.
1767:  Double Falsehood is successfully revived at the Covent Garden Theatre in London, which (perhaps?) obtains possession of Theobald’s three original adapted “manuscripts” of the play.
1782:  Nearly four decades after Theobald’s death, a 1653 notation in the London’s Stationer’s Register is discovered that notes the bookseller/publisher Humphrey Moseley’s plan to publish a play of “The History of Cardenio, by Mr. Fletcher and Mr. Shakespeare”. Soon thereafter, court records of James I are also found that indicate that a play called Cardenna was presented at court performances by the King’s Men (Shakespeare’s company) during the 1612-1613 season. This coincides with the time that Shakespeare was writing collaborative plays (including Henry VIII and The Two Noble Kinsmen) with his fellow King’s Men playwright, John Fletcher; and the story of Cardenio (as previously noted) parallels the plot of Double Falsehood. If Moseley every actually published The History of Cardenio, no surviving copies have yet been found.
1856:  The Covent Garden Theatre is destroyed by fire, along with its archives of plays and manuscripts—including (presumably) Theobald’s original Double Falsehood documents.
2010:  Following renewed interest in the mystery surrounding the “lost” Shakespeare play Cardenio, generated by “re-imagined” theatrical versions by Gregory Doran (Artistic Director of the Royal Shakespeare Company) and Gary Taylor (editor of The Oxford Shakespeare), the prestigious Arden Shakespeare includes Double Falsehood in its annotated editions of Shakespeare’s plays.
2015:  Reports of academic linguistic studies of the text of Double Falsehood are published in both The New Yorker and The Times; the conclusions presented are that “the voices of Shakespeare and Fletcher predominate, and that Theobald’s is minimally present” (Alastair Gee, The New Yorker, June 19, 2015). 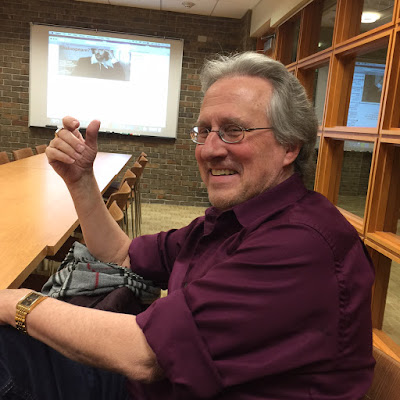 David Montee, PhD, visited Oberons at our March 11, 2017 meeting to discuss the  "Shakespeare Authorship Symposium" that he has organized at Interlochen Center for the Arts from 11 a.m. - 7 p.m. April 22, 2017 in the Harvey Theater at Interlochen. Oberon chair Richard Joyrich, MD, will be one of three featured speakers at the symposium.

Montee and his colleagues at Interlochen organized the symposium to supplement Interlochen's student production of Gregory Doran's version of Cardenio, a lost play attributed to John Fletcher and William Shakespeare that Montee directs for presentation April 21, 22, 23, 2017. Montee said:

Sabrina Feldman, author of Thomas Sackville and the Shakespearean Glass Slipper, will also present at the symposium, along with Scott Harman who teaches at the University of Wisconsin and at Interlochen during their summer arts camp. Oberon chair Richard Joyrich's presentation will cover the topic of whether there is reason to doubt a Stratfordian Shakespeare.

Montee said, "The strongest argument for me is how could this man [Shaksper from Stratford] not have left a single book with his name in it, or a single document signed by him [notwithstanding the signatures on his will]."

To learn more about the background of Cardenio, Montee recommends The Quest for Cardenio: Shakespeare, Fletcher, Cervantes, and the Lost Play by David Carnegie and Gary Taylor (Oxford University Press, 2014).

The public is invited to attend the April 22, 2017 "Shakespeare Authorship Symposium" at Interlochen. The cost is $25, those who wish to attend may register for the symposium online. Tickets for Cardenio -- which is running the entire weekend of April 21, 22, and 23, 2017 -- must be purchased separately, but are also available online at the same site as the symposium tickets.

Montee is the author of Translating Shakespeare: a Guide for Young Actors Smith & Kraus (2014). 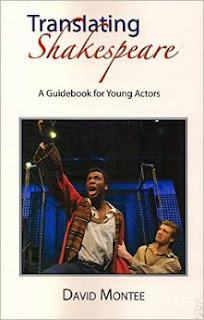 Montee is currently studying for his debut as King Lear, in a production that will be presented the last weekend of June and the first weekend of July at Interlochen.

We are grateful for David Montee's visit with us, and we look forward to our visit to Interlochen on the spectacular Leelanau peninsula this spring. 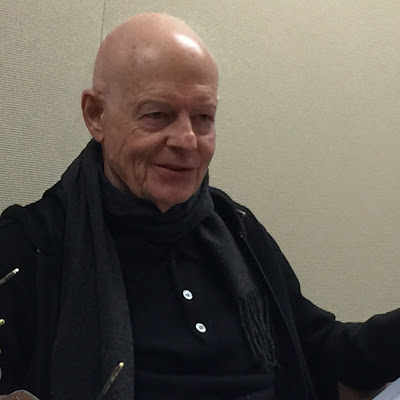 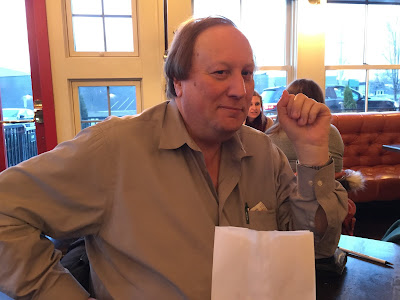 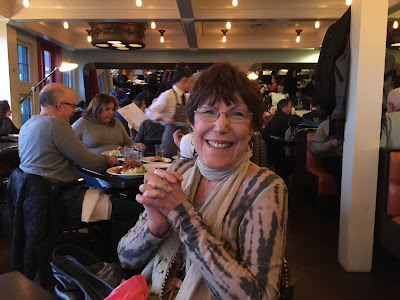 Mara Radzvickas at Beau's on Telegraph in Bloomfield Hills, MI