A further update on the Toronto Conference

I have more information now about the upcoming Toronto Conference to be held October 17-20, 2013. I urge everyone to register as soon as possible.

Tickets to see The Merchant of Venice at the Stratford Festival on Friday are only guaranteed if your registration is received by September 15 (but MIGHT still be available later).

Also, the Metropolitan Hotel, where the conference is being held will only honor the discounted conference room rate of $135/night (plus taxes and fees) until September 17.

Here is the current Conference schedule (subject to change):

Toronto Conference Schedule
The following program is subject to change.
Thursday, 17 October
12:00-1:00   Registration
1:00-1:15     Welcome. Opening of Conference.
1:15-2:00      Shelly Maycock.  (Virginia)
“Essex, Oxford and the Concept of Popularity in Late Elizabethan
Discourse.”  How the notion of popularity can be recast from an
Oxfordian perspective.
2:00-2:45      Priscilla Costello.  (Ontario)
“Astrology Confirms de Vere.”   A professional astrologer compares the
astrological charts of de Vere and “Shakespeare.”
2:45-3:30     Ron Halstead.  (Michigan)
“Death of a Dictator: The Dangerous Timeliness of Julius Caesar and
the Authorship Question.”  De Vere’s interest in rebellion.
3:30-3:50    Coffee break
3:50-4:35  Walter Hurst.  (North Carolina)
“What’s Your Authority for that Statement: An Approach to
Examining External Evidence in Early Modern Authorship.”
How to evaluate the strength of historical evidence.
4:35-6:00         Video: The Naked Shakespeare
A new video on the authorship question from Germany.

Friday, 18 October
8:30-9:15       Ron Hess.  (Georgia)
“The Significant History of The Passionate Pilgrim.” Did this work
predate both Venus and Adonis and Rape of Lucrece?
9:15-10:0        Heward Wilkinson.  (UK)
“Coleridge and the Implications of Authorial Self-Awareness in
Shakespeare.”   There is no sign that the Stratford man embodied
the consciousness of “Shakespeare” while there is substantial testimony
that Oxford did.
10:45-10:45     Michael Egan. (New Mexico)
“The Shakespeare Grain Dealer Uproar.”  The documented facts about
Shakspere’s financial arrangements, when compared with the plays, show
clearly that we are dealing with two distinct individuals, the man from
Stratford and the man who wrote the plays.
10:45 –11:05   Coffee Break
11:05-11:50     Tom Regnier. (Florida)
“Could Ben Jonson Think Like A Lawyer? Taking a Closer
Look at Clarkson and Warren.”   A revaluation of the 1942 study on
property law in Elizabethan drama which disparages Shakespeare’s
legal knowledge.
11:50-12:35      Earl Showerman. (Oregon)
“A Midsummer Night’s Dream: Shakespeare’s Aristophanic Comedy.”
Was Shakespeare acquainted with Athenian drama?  The former
President of the SF explores the territory.
Lunch on own
3:00               Bus leaves for the Stratford Festival
(Tom Regnier paper on “The Law and Merchant” on bus)
5:00               Arrive at Stratford.  Meeting with Antoni Cimolino (Director
of Merchant)  followed by “on own’ dinner
8:00               Merchant of Venice on Festival Stage
10:30             Bus returns to Toronto (arrives about 12:30 a.m.)

Saturday, 19 October
8:30-9:30      Annual Meeting of the Shakespeare Oxford Society
9:30-10:15     Cheryl Eagan-Donovan. (Massachusetts)
“The Reason for the Alias: Oxford’s Bisexuality and the
Elizabethan Theatre.”  A look at the sexual behavior of both
actors and audiences of the period suggests that Oxford’s
Sexuality may have been a prime reason for the pseudonym.
10:15-11:00    Hank Whittemore. (New York)
“The Unbroken Line: Oxford, Acting Companies and the
Phenomenon of Shakespeare.”  A look at de Vere as guiding
force behind the three most important acting companies
of Elizabeth’s reign.
11:00-11:15    The Missing Debate: A Comment. Don Rubin and Keir Cutler.
11:15-12:00      Roger Stritmatter (Maryland) and Lynne Kositsky (Ontario)
‘Much Ado About Nothing: The Tempest Debate.” Two major
scholars put the Tempest dating debate to rest.
12:00-12:15       The Tempest Book launch/signing (Roger and Lynne)
12:15-1:45      Lunch (buffet with Keynote)
Mark Anderson (Massachusetts)
“Shakespeare, Newton and Einstein: Listening to the Obsession
of Genius.”  The author of the major de Vere biography, Shakespeare
By Another Name looks at the nature of genius and obsession.
2:00-2:45        Robert Detobel/Henno Wember  (Germany)
“The Outcast State: Oxford’s Passion for the Theatre.”  Was it
his love of the theatre that led to Oxford’s “outcast state?”
2:45 to 3:30    Keir Cutler (Quebec)
‘From Crackpot to Mainstream: The Evolution of the Authorship
Question.”  Are the doubts about the man from Stratford becoming
mainstream? An actor suggests that the answer is “yes.”
3:30 to 4:15      Sky Gilbert (Ontario)
“Was Shakespeare A Euphuist?”  The connections between Shakespeare
and Lyly, between Endymion and Twelfth Night done with student actors.
4:15 to 4:35      Coffee break
4:35 to 6:35    Canadian Premiere Screening: Last Will and Testament.
Introduction of this full-length film by the directors – Lisa and Laura     Wilson.

Sunday, 20 October
8:30-9:30         Annual Meeting of the Shakespeare Fellowship
9:30-10:20       Ramon Jimenez (California)
‘Shakespeare’s Two Lear Plays: How the Playwright Transformed His
First Romance into his Last Tragedy.”  From King Leir to King Lear.
10:20-11:20       Michael Morse. (Tennessee)
“What the Thunder Said and Tom O’Bedlam’s Song.”  Views of Lear.
11:20-12:15        Gerit Quealey. (New York)
“Studying Authorship: Why It Matters for Actors. The Road
To Revelation.”  How authorship research can inform and illuminate
A Text.” A working actor demonstrates her points with student actors.
12:15-2:00         Closing Banquet with Keynote.  Awards and Final words.
John  Shahan (California).
“The Shakespeare Authorship Coalition: Future Strategies.” The
head of SAC and one of the editors of the volume Shakespeare Beyond
Doubt:  Exposing An Industry in Denial discusses plans for the coming
year.

The conference should be one of the best that we have had. I hope to see a lot of people there.
Posted by Richard Joyrich at 12:26 PM 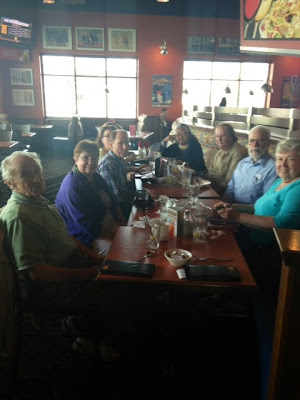 We found Wells a masterful speaker. A fine-looking man, with a shock of white hair and emphatic white brows, tie-less in a grey suit and wearing his signature pink dress shirt with flesh-colored stockings and oxfords, he read from a superb, prepared text on “Sex and Love in Verona, Venice and Vienna”.

In the question and answer session post-presentation, therefore, it came as a shock to hear this elegant, accomplished gentleman lead the audience in jeering laughter against those, like my friends and I who question the Stratfordian authorship attribution, refer to as “anti-Shakespeareans” – a name none of us would choose for ourselves.

In monetary terms, alone – terms we surmise the Shakespeare Birthplace Trust finds compelling – our contribution to the Shakespeare enterprise -- in book-buying, ticket-buying, and travel – is enormous. This weekend’s jaunt cost over $2000 for play tickets and another $1500 for rooms and food. All of us devote extraordinary amounts of time and money to our passion for the great work of Shakespeare.

To throw this kind of this kind of devotion out the window and label it anti-Shakespearean strikes us as the height of folly. But name-calling is the resort of many Stratfordians who cannot resist venting their fury at those who question the authorship of the Stratfordian candidate.

A recent example of this type of Stratfordian strategy appears in the comments section of Wells’ review of John Shahan’s Shakespeare Beyond Doubt? Exposing an Industry in Denial where a commentator provided an assessment of those who dare to doubt the Stratford candidate’s validity as the author of Shakespeare’s works, comparing anti-Strat Oxfordians to the apartied regime in South Africa. Alasdair Brown on Aug. 13, 2013 said:

This type of spittle-filled invective is, in my experience, typical of Stratfordian discourse.

Having this tactic of ridicule repeated this weekend at the great Ontario festival -- where my friends and I have gone year after year to learn about Shakespeare’s great art -- was painful. All of us are professionals, most hold advanced degrees. In everyday life, none of us is commonly abused for inadequate intellectual capabilities.

Yet, when Wells finished his talk, and an audience-member opened the discussion with the question: “Would you comment on the perpetuation of Shakespeare deniers despite scholars like yourself who have settled the matter?” Wells replied: “Human folly goes on, despite every effort . . .” raising a derisive laugh from the audience.

Ridicule is intended to give pain. Perhaps perpetrators such as Wells consider this pain is deserved and/or instructive, but regardless of the justification, the intention is the same – hurt the bad people; make them too ashamed to continue their “folly”.

Shaming is a very effective tactic against humans. When Wells equates anti-Stratfordians with holocaust deniers as he did yesterday, as James Shapiro did previously in this same venue, and as many others have done elsewhere, I am personally repelled. If causing pain is their goal, they have succeeded; but bullying is not an argument, and if their goal is to convince me that Shaksper from Stratford is the author of Shakespeare’s work, by using this tactic they are the ones engaged in folly, not I.

I would have answered that audience member’s question differently. I would have told him that -- for me -- the question of the Shakespeare authorship is far from settled.

And why, indeed, should I be ridiculed for my position? Since when has research and study become an abomination? Since Stanley Wells says it has? Why should I bow to Professor Wells’ authority when all my life I have been taught that thinking and learning, considering, and judging for myself is my personal responsibility?

At the end of his presentation, Wells was joined by Paul Edmondson, co-author of their recent book, Shakespeare Beyond Doubt – a compendium of commentary attempting to refute questions about the Stratfordian attribution of Shakespeare’s works.

They said they wrote their book:


They opined the authorship contagion may have spread elsewhere, perhaps not aware that Don Rubin who had convened a class on Shakespeare authorship last year at Toronto’s York University was in their audience.

During the discussion, Edmondson  promoted the idea of collaborative authorship as the future of Shakespearean studies.

Edmondson clearly, by these and other comments yesterday, supports the recent and growing interest in collaboration as a viable Shakespeare authorship theory.

I personally view the recent interest in collaboration as an attempt to keep the Stratfordian candidate viable in the face of increasing critical pressure on his lack of credential in terms of knowledge and experience.

While continuing to insist on the Stratfordian candidate’s adequacy, Stratfordian supporters studying Shakespearean collaboration, nevertheless, shore up his bonifides with assist from other sixteenth- and seventeenth-century writers; similar, or so I have read recently, to a stable of writers working on a TV sitcom – a position I find pathetically anachronistic.

Does this mean the war is won?