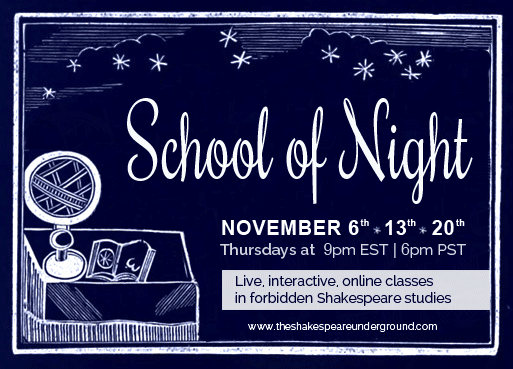 SOF webmaster and media consultant Jennifer Newton sent information about an online class lead by Michael Delahoyde to those who follow her The Shakespeare Underground website. Oberon chair Richard Joyrich said, "This 3-part online lecture series will be very good. For those who haven't yet seen him, Professor Delahoyde is an extremely entertaining and knowledgeable speaker. I have already registered for this course. It is completely free. All you have to do is provide your email address so you can get the details on how to access the webcasts."

I want to let you know of an upcoming event, School of Night -- an interactive, online Shakespeare authorship course featuring Professor Michael Delahoyde, hosted by The Shakespeare Underground. This three-part series will take place Thursday evenings in November: 11/6, 11/13, and 11/20.

These live video webcasts will feature real-time discussion via chat and a Q&A session in which participants with webcams can appear onscreen and converse with Dr. Delahoyde and the group.

The course is free and open to all. Registration and details are here: http://www.theshakespeareunderground.com/school-of-night/. Technical information about how to access the class and participate interactively will be sent to registrants.

The School of Night course is experimental -- a further exploration of online possibilities for communicating about the Shakespeare authorship question. If it goes well and receives a good response, we may make it an ongoing program. It would be wonderful to see you there, and I'd appreciate any feedback and suggestions you have about the experience. Please join us in November for the classes, and please spread the word!

Ever,
Jennifer Newton
The Shakespeare Underground 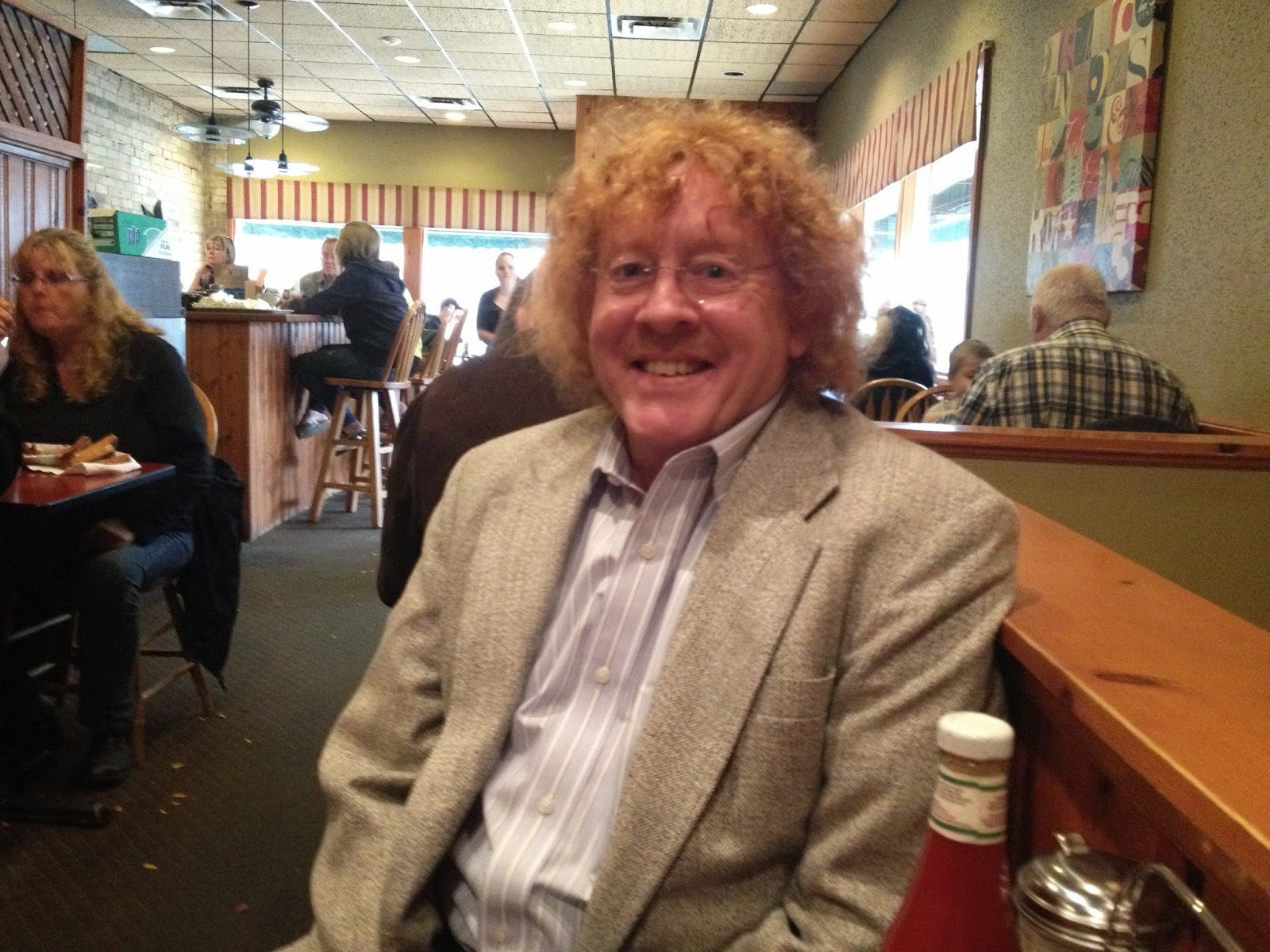 A contingent of Oberons hit the road again this weekend to attend the "Authorship Appeal" moot court sponsored by the Stratford Festival in Ontario as part of its annual Forum series. 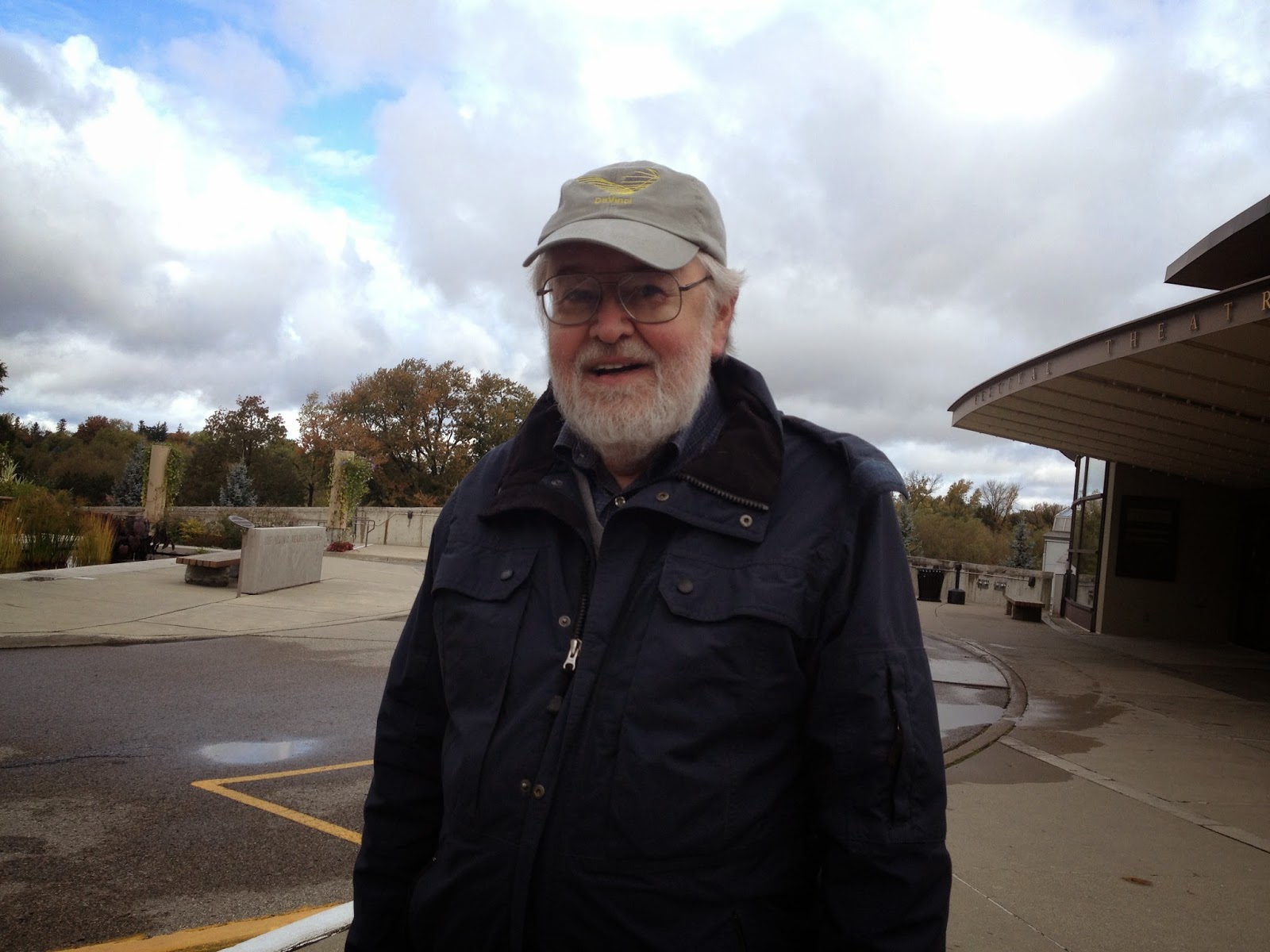 Matt Wyneken, Ron Halstead and I attended the event held in the Festival Theatre on October 4 where we watched litigator Guy Pratte contend against the Stratfordian attribution of the Shakespeare canon before the Right Honorable Madam Chief Justice Beverley McLachlin of the Supreme Court of Canada.

We met-up with old friends Lynne and Michael Kositsky. Lynne Kositsky shared the news that she has two new young adult books out: With Fearful Bravery and The Plagues of Kondar. York University professor Don Rubin -- who organized the SOS/SF conference last year in Toronto -- had assisted Guy Pratte with his case against Stratford and attended the Forum event with his wife, Patricia Keeney. 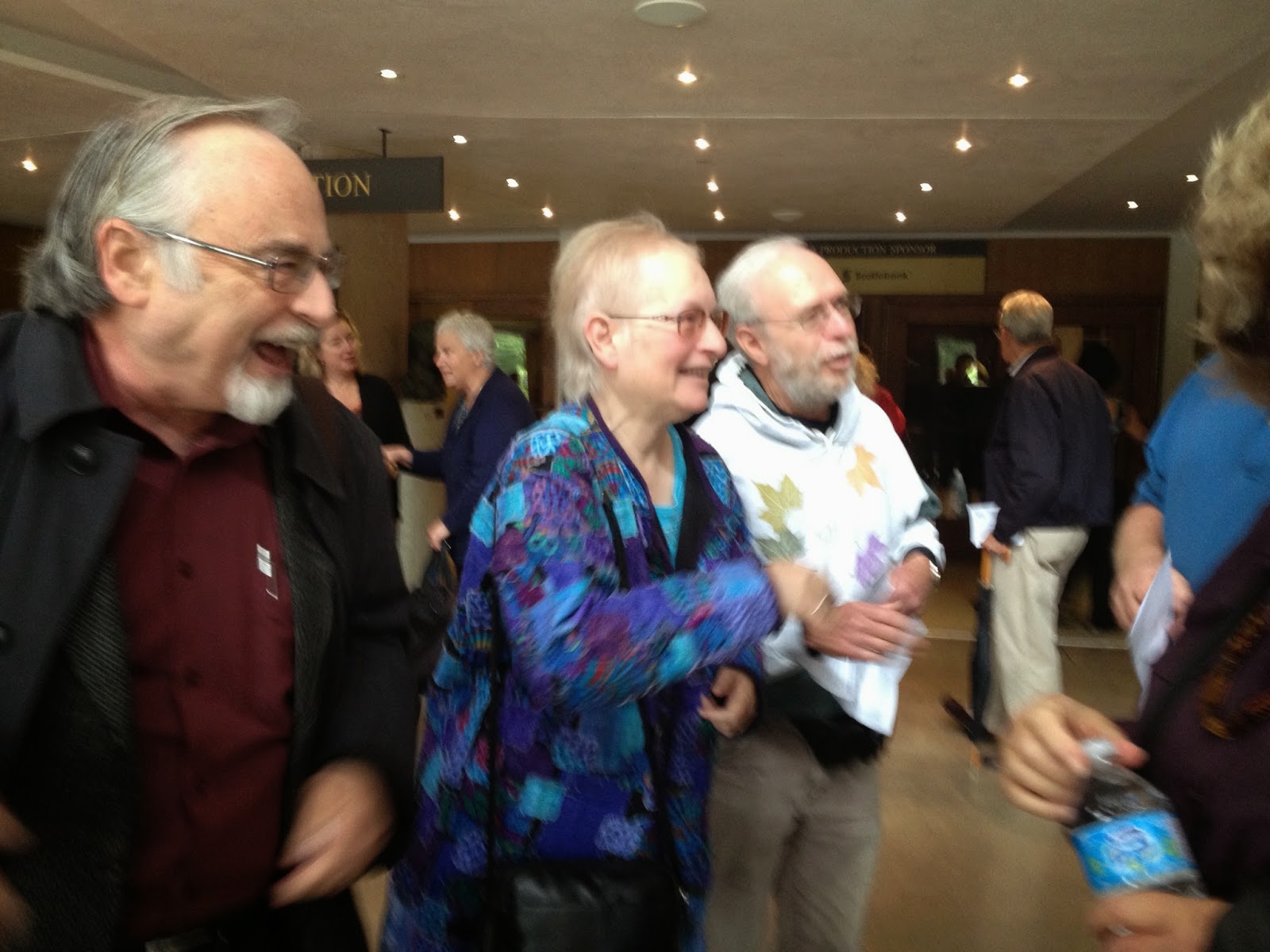 Don Rubin and Lynne and Michael Kositsky greet friends in the lobby of the Festival Theatre, Stratford, Ontario before "Authorship Appeal" moot court.

After the moot court, Matt and I had lunch with Don Rubin, Patricia Keeney, the Kositsky's, Priscilla Costello, Sky Gilbert, Justin Borrow, Ann Zakelj, Matthew Wynekin, Ted Alexander and Chris Pannell at Demetre's in Stratford. Ron Halstead had a ticket to see the King Lear matinee, and skipped lunch. We dined in the small private room where we Oberons have gathered during Stratford visits in the past. 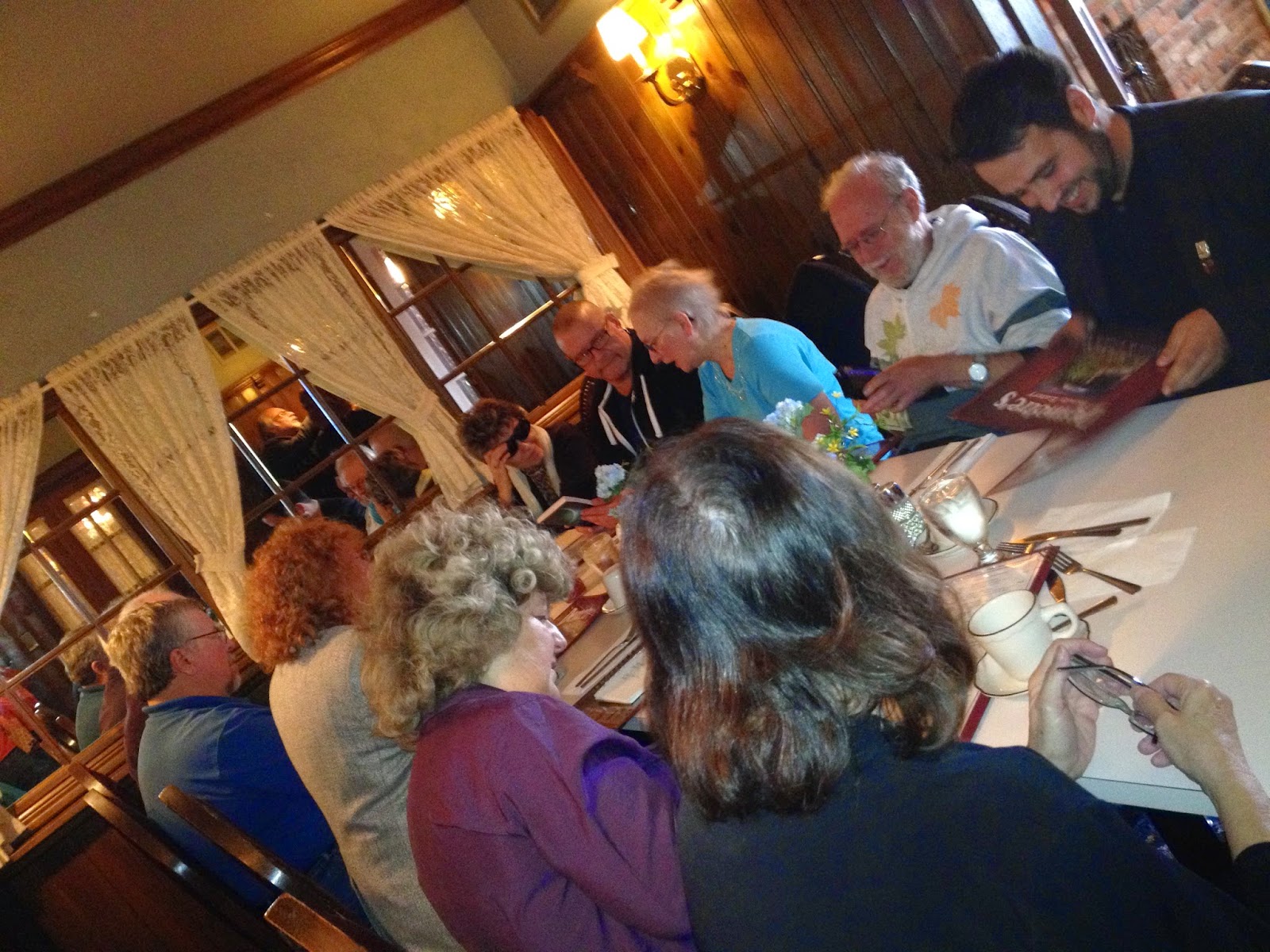 The entire "Authorship Appeal" event was streamed live over the Internet and is available on video produced by the Shakespeare Festival of Ontario, Canada.

Read more of my report on the "Authorship Appeal" moot court on the Shakespeare Oxford Fellowship news page under the title "Rubin pleased by Stratford moot court".
Posted by Linda Theil at 12:43 AM

As a member of the Folio Society (an organization that prints and sells very beautiful, although expensive, editions of classic works of literature, history, fiction, science, and just about everything else) I get a free subscription to their semiannual magazine, which is simply called folio. This magazine contains very short articles about literary matters of all kinds.

I just received the September 2014 edition and it has a short article by Professor Stanley Wells, titled “Shakespeare: A Lover of Books”.

In this article Professor Wells discusses briefly how Shakespeare (by whom he of course means William Shakspere of Stratford) loved and read many books and used them as inspiration for his plays.

Wells mentions many books that Shakespeare must have read and says that many of them were published before Shakespeare began writing his plays. These include Arthur Brooke’s Romeus and Juliet (1562), Arthur Golding’s translation of Ovid’s Metamorphoses (1567) and Sir Thomas North’s 1579 translation of Plutarch’s Lives.

I note that all of these books would have been “old” by the time the traditional William Shakespeare would have begun writing plays (early 1590s), but are just about right for the young Edward de Vere to have read at a time when he could very well have been writing his first plays. [Some Oxfordians even ascribe the writing of the first two of these books to de Vere himself.]

In his list of books that Shakespeare read (which of course is not intended by Professor Wells as being inclusive, just “interesting” to the readers of folio) there are none published after 1604 (when Edward de Vere is supposed to have died).

Professor Wells also mentions that William Shakespeare and John Fletcher collaborated on The Two Noble Kinsmen [a “fact” I have grave doubts about], which is based on works of Chaucer, and speculates that “they probably used an edition of Chaucer published in 1598”. I don’t know how Professor Wells came to this conclusion, but I will note here that Edward de Vere is known to have purchased a copy of Chaucer in 1569.

Professor Wells has some other speculations in his article that I have doubts about. One is that Shakespeare (i.e. William of Stratford) “forgave” Robert Greene for writing about him in Groatsworth of Wit (as an "upstart crow") and then used Robert Greene’s 1588 Pandosto as a source for The Winter’s Tale, one of Shakespeare’s “late masterpieces” [according to Professor Wells].

But, where would William of Stratford get hold of any of these books? Ah, good question. Here is the speculation of Professor Wells.

He notes that, at school [this is of course assuming that he actually attended the Grammar School in Stratford], “Shakespeare would have known his townsfellow Richard Field, three years his senior, who, like him, was to go from Stratford to pursue a successful career in London.”

Professor Wells explains that Richard Field was a publisher and his publications included the first four editions of Venus and Adonis and the first edition of The Rape of Lucrece, as well as the volume that contains Shakespeare’s The Phoenix and the Turtle. So much is actually true, but I am not sure of the significance of this. But Professor Wells has an answer:

“Shakespeare may well have used Field’s publishing shop as a kind of library where he could read, and perhaps borrow—or even buy—some of the books which inspired his plays.”

Well, this explanation of how William of Stratford got hold of the books he needed in order to be able to write all those plays serves as well as any other that traditional scholars have been able to come up with. Never mind that there is no actual evidence that William of Stratford EVEN KNEW Richard Field, or that Richard Field is not known to have published any of the books that Professor Wells mentions in his article, or that no books are mentioned in the will of William Shaksper of Stratford.

“…books played a massively important part in Shakespeare’s life from his schooldays onwards. In what is surely the most autobiographical scene in his plays, Act 4 Scene 1 of The Merry Wives of Windsor, he portrays a schoolboy named William being put through his paces in Latin grammar, quoting directly from William Lily’s Short Introduction to Grammar. It is easy to imagine this as a scene from Shakespeare’s own boyhood. Lily’s book, prescribed by royal proclamation for use in all the grammar schools of the nation, continued in use until well into the nineteenth century. From it Shakespeare himself would have received his grounding in the language at the King’s New School in Stratford-upon-Avon.”

First of all, I thought that reading the plays autobiographically was taboo in the case of Shakespeare (as opposed to the case for virtually EVERY OTHER author) according to the teachings of the “orthodox” Shakespeare scholars. Apparently it isn’t prohibited when you can come up (or "imagine" as Professor Wells puts it in the above quotation from his article) with some SMALL autobiographical link to the life (or actually the imagined life, since there is no direct evidence either way that William of Stratford even attended the Grammar School at Stratford) of the “man from Stratford”.

Second, Professor Wells makes a big deal that Shakespeare quotes from, and also parodies, this particular book (although the author’s name is almost always given as William Lyly, not Lily as Professor Well’s has it, but no matter), which was used in the Grammar Schools, thereby “proving” that Shakespeare went to a Grammar School. However, Professor Wells fails to note that this book on Grammar was ALSO the prescribed text for the teaching of the nobility by their tutors, and that a copy was present in the library of Sir Thomas Smith, the tutor of young Edward de Vere, as well as in the library of Sir William Cecil, in whose house de Vere was brought up after the death of his father.

Third (and perhaps least important), William Lyly was the grandfather of John Lyly, who was, for a time, the “secretary” of Edward de Vere, and who was also the author of various works that were direct inspirations for “Shakespeare”.

So, here we once again have Professor Wells struggling, as do all traditional scholars, with trying to reconcile the immense “book-learning” of William Shakespeare with the known life of one William Shakspere of Stratford.

I wish him gook luck in this endeavor.

The September issue of folio is not yet on the Folio Society web page for this publication (www.foliosociety.com/pages/folio_magazine), which still has the March 2014 edition, but I hope it becomes available on this website in the near future so it can be more widely read by those interested in Shakespeare's use of books.
Posted by Richard Joyrich at 10:05 PM No comments: