by Susan Grimes Width
What an intense Friday the 13th! Linda Theil, Richard Joyrich and I travelled to Canada via the Blue Water Bridge . After a lunch with Michael & Lynne Kositsky we saw a wonderful performance of Cymbeline in the Tom Patterson Theatre. Cara Ricketts as Imogen, the daughter of Cymbeline, was fantastic in both her beautiful gown and dressed as a young man.  Graham Abbey as Posthumos, so named because he was delivered at his mother's death, was great as a loving husband torn away by his father-in-law's disapproval, a cuckold husband - oh ye of little faith, and as a bare-chested soldier. The fighting between Cybeline's faithful and the Roman Soldiers seemed to take place right in our laps. The play was staged wonderfully, only my cheeks complained at the length!

After a quick dinner and too-short rest, we attended the Festival Theatre for Henry V. Wow! The stage was massive and cold and the huge English and French flags were switched as backdrops so frequently it was dizzying. Thank goodness for the copy of Peter Saccio's Shakespeare's English Kings, copyright 1977 Oxford University Press. I could never have kept up with all the characters if I hadn't read the historical information in this book ahead of time. The light moment was Bethany Jillard, as Catherine, King Charles VI's daughter. As she sat naked in her bath, her lady-in-waiting taught her the English word for parts of the body. Catherine's commentary in French certainly distinguished the French speakers in the audience by their laughter. The entire audience held their breath as she rose nude from the tub behind the sheets held by the maids! The strategy and battles between the French and English were no laughing matter. Death was well-represented on the stage. Another great Stratford production.
Posted by Susan Grimes Width at 3:41 PM 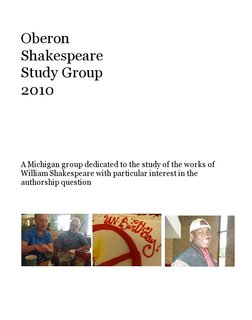 On the order page for each yearbook, you will also see an option to order a print copy of each book. These yearbooks were originally published on demand through Blurb as a means of creating hard copy editions of the posts on the Oberon Shakespeare Study Group web-log for each year since the blog was created in July 2007. The cost of the print editions does not include a mark-up for Oberon, and represents only the cost that Blurb requires to print the book.

You may sample each ebook/iBooks before downloading from the catalog page. You may also read the entire book on the Blurb website by clicking the BOOK PREVIEW badge for each book in the sidebar of the Oberon blog. You can reach me at linda dot theil at gmail dot com if you have any comments or questions.
Posted by Linda Theil at 2:05 PM 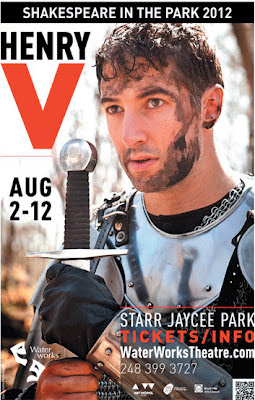 Water Works Theatre will open their 2012 season of Shakespeare in the Park at Royal Oak on August 2. All performances are held at the Starr Jaycee Park in Royal Oak, Michigan.


Henry V directed by Sara Catheryn Wolf and featuring Michael Brian Ogden in the eponymous lead will run Aug. 2-12: Thurs., Fri., Sat. at 8 p.m. and Sun. at 5 p.m. Tickets are $20, good for any performance; and are available online at http://www.waterworkstheatre.com/tickets.html and at the gate.


Summer Sonnets, an original production written by local playwright Audra Lord and directed by JM Ethridge will be presented free on August 4, 5, 11, and 12 at 3 p.m. The performance is " . . . a magical hour in the park with the Bard's legendary poetry set to a modern tale . . ." according to the company website.


Oberons have attended many Water Works productions in the past and we have never been disappointed -- highly recommended!
Posted by Linda Theil at 12:31 PM 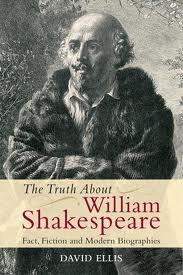 University of Kent at Canterbury emeritus professor David Ellis’ new book, The Truth About William Shakespeare: Fact, Fiction and Modern Biographies (Edinburgh University, 2012), has been released in the US and received a starred review by Margaret Heilbrun in the May 2012 edition of Library Journal. The short review under the title “New Titles onShakespeare” offers this insight:


In this meaty little book, Ellis takes on the spate of biographies of Shakespeare in recent decades. With incisive scholarship and wit, he demonstrates that most have been written in the absence of credible evidence: authors infer details of Shakespeare’s life and beliefs from information about the times, unverifiable anecdotes and jokes, sometimes even the sheer lack of evidence (e.g., Shakespeare must have been “discrete” and “concealing” because his name seldom appeared in the public records). . . . Non-academics and academics alike should pick this it up; it’s a sleeper and strongly recommended. (Given the price of the hardcover, consider waiting for the paper edition—ISBN 9780748646678 $32.50—due out in January 2013).


The publisher's publicity on Amazon.com says:

How can biographies of Shakespeare continue to appear when so little is known about him? And when what is known has been in the public domain for so long? Why have the majority of the biographies published in the last decade been written by distinguished Shakespeareans who ought to know better? To solve this puzzle, David Ellis looks at the methods that Shakespeare's biographers have used to hide their lack of knowledge. At the same time, by exploring efforts to write a life of Shakespeare along traditional lines, it asks what kind of animal 'biography' really is and how it should be written.

We asked Dr. Ellis if the lack of information about the Stratford candidate might have influenced him to consider the possibility of an alternate authorship candidate. Ellis replied:

I believe there is enough information available about Shakespeare to support the idea that he wrote most of the plays usually attributed to him but not enough to justify the huge pile of biographies which have appeared over the last fifteen years.  Many of these incorporate fiction without the reader being made aware that they are doing so.  The open or avowed mixing of fiction with biography has always troubled me, but that may be a matter of taste.

Ellis’ phrase, “avowed mixing of fiction with biography” could very well describe Graham Holderness’ new fiction/non-fiction Shakespeare bio Nine Lives of WilliamShakespeare (Continuum, 2011) in which he creates avowed fictional stories about Shakespeare to flesh out his book in which he claims to “. . . address all the questions and anxieties suppressed by the mainstream biographical tradition.”

Ellis joins James Shapiro who, in his 2010 Shakespeare bio about the authorship question, Contested Will, also excoriates authors who enhance the bald Shakespeare biography with fictional toupees -- although, strangely, Shapiro recently praised the Holderness mélange of fiction and non-fiction.

Arch-Stratfordian Holgar Syme of the University of Toronto is another academic who has warned that fictional biographical claims in support of their candidate harm the Stratfordian position. In an October 18, 2011 post titled “Enough Already” on his web-log Dispositio, Syme said, “If nothing else, a serious engagement with anti-Stratfordian claims might make us better scholars, too. . . . And we might as well admit that traditional Shakespeare scholarship has its own significant blind spots."

Four outspoken Stratfordian academics -- Ellis, Shapiro, Holderness and Syme --  have recently denounced the false nature of traditional Shakespearean biography. Ellis said no new information on Shakespeare has come to light in the last 100 years, and Samuel Schoenbaum’s ultimate bio of Shakespeare biography, Shakespeare’s Lives, makes it clear that the previous 200 years was filled with hearsay and fraud, and the 100 years before that was an echoing silence. Ellis calls this black hole “enough information” to support the Stratfordian attribution, but clearly it is NOT enough information, or Ellis et al, would not have the “huge pile of biographies” to complain about. If there were enough information available for a rational biography, Stratfordians would not feel compelled to make stuff up.

Ellis’ The Truth About William Shakespeare is not currently available in e-book format. The paperback edition is due out in January 2013.


NOTE: Also of interest in the May 2012 edition of Library Journal is a review of Julia Thomas' Shakespeare’s Shrine: The Bard’s Birthplace and the Invention of Stratford-upon-Avon (Univ. of Pennsylvania. Jul. 2012). Margaret Heilbrun said, "In 1769, the renowned actor David Garrick organized a Shakespeare celebration in Stratford-upon-Avon. When he left the town, Garrick cursed Stratford as 'the most dirty, unseemly, ill-paved wretched looking place in all Britain.' Yet less than 70 years later the house where Shakespeare was born and raised came up for auction and its preservation became a national crusade, though not every class embraced the cause equally. . . .Thomas asks what change in values had occurred that made Victorians see Shakespeare’s birthplace as pivotal to an appreciation of him."
Posted by Linda Theil at 8:58 PM

England's all-male Shakespeare repertory company, Propeller, brings Twelfth Night and Taming of the Shrew to the Power Center in Ann Arbor February 20-24, 2013. For information and tickets see the UMS web pages at
http://ums.org/performances/propeller-shakespeares-twelfth-night and
http://ums.org/performances/propeller-shakespeares-the-taming-of-the-shrew or check out the company's web pages at
http://propeller.org.uk/
Posted by Linda Theil at 6:30 PM