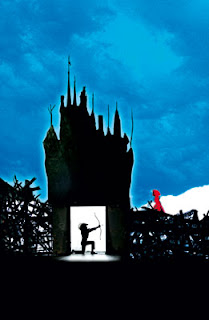 The University Musical Society is sponsoring a presentation of All's Well That Ends Well broadcast in High Definition from the National Theater at 5 p.m. October 11 in the Michigan Theater in Ann Arbor. Tickets are $22. Is this a harbinger of future HD broadcasts inspired by the success of the Met's opera simulcasts?
Posted by Linda Theil at 6:22 PM 1 comment:

Critic Caldwell Titcomb reported yesterday in The Arts Fuse on the Actors from the London Stage (AFTLS) performance of King Lear at universities around the country.


Shakespeare’s challenging “King Lear” is the vehicle for this year’s fall tour of the troupe called Actors From the London Stage (AFTLS). This project was begun in 1975, and has been flourishing ever since, with impressive results.


Read his review at: The Arts Fuse Theater Review: "Actors From the London Stage"


AFTLS is based at Notre Dame in South Bend, but Oberons have missed their fall presentation of King Lear there. They'll be nearby at Butler University in Indianapolis October 19-25 and at DePauw University (Greencastle, Indiana) November 2-8. The group will do Romeo and Juliet January 25-31, 2010 at Notre Dame and tour the play next spring. First South Bend then on to more Shakespeare in Chicago! Sounds like a road trip to me -- or a conference site!

Posted by Linda Theil at 8:37 AM No comments:

There in my mailbox today was our own Linda Theil's second SOS Newsletter. What a treat!  Impressive indeed. Thick, full pages crammed full with great information and analysis about the authorship issue. Linda is quickly establishing a reputation of quality as the newsletter's new editor

It is worth the annual membership fee to receive this wonderful publication. If you are not yet a member of the Shakespeare Oxford Society, please consider joining now. The newsletter will be yours, and you will be part of an organization with a proud history of research and discovery which will some day lead us to world wide recognition of the true author.

Posted by Linda Theil at 7:21 AM No comments: 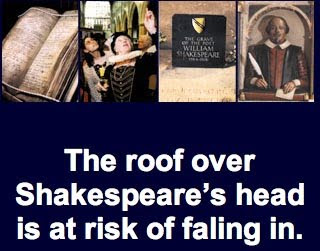 Sorry, I just couldn't resist posting this excerpt from the web. It can be found at
www.shakespeareschurch.org/safety-warning-news.htm
It actually refers to a serious problem (and the website does eventually spell "falling" correctly), but it struck me as perhaps a nice summary of the true feeling of some "orthodox" scholars in the face of all the mounting evidence that "their guy" was NOT THE ONE. I think this explains why there are suddenly so many new "biographies" of Shakespeare coming out. It is a direct response to the points being made by Oxfordians and other "Anti-Stratfordians" (I actually don't really like that term).
Anyway, this excerpt and the website it comes from is actually about the real problem that the roof over the bust and grave of William Shakespeare in Holy Trinity Church in Stratford-upon-Avon is in urgent need of repair and that the charity organization "Friends of Shakespeare's Church" is trying to raise money right away to help out. They were founded in 2002 in order to help raise the money to pay for a massive multi-year campaign to preserve and fix the church. This included the 2008 "revamping" of Shakespeare's grave (see my previous blog from May 29, 2008). But now they need immediate funds to fix the roof which was an unanticipated problem.
More information can also be found at these two sites:
http://news.yahoo.com/s/nm/20090921/lf_nm_life/us_britain_shakespearechurch
http://news.bbc.co.uk/2/hi/uk_news/england/coventry_warwickshire/82266160.stm
I actually think that Stratford-upon-Avon will still have a future after Edward deVere becomes recognized as the "true Shakespeare" After all, the village of Castle Hedingham does not seem to want all the publicity which will come to them when a new Birthplace is proclaimed.
Stratford can still show off their Birthplace and the other Shakespeare Properties. They will just have to refer to the Birthplace as the birthplace of the "Man Formerly Known as the Bard" or "the Bard's Front Man" or "the man who stole the credit for writing the plays" or "the man whose name was similar to the playwright's and just got confused with him" or whatever the real reason for the original attribution of the works to this Stratford local turns out to be.
So don't feel bad about giving a donation to help preserve Holy Trinity Church even if you are an "Anti-Stratfordian" (there's that term again). After all, we need to preserve information about past mistakes, misconceptions, and myths so that we can learn from them.
Let's also hope that the "orthodox" scholars don't get too hurt when the metaphorical "roof over Shakespeare's head" does eventually fall.
Posted by Richard Joyrich at 10:49 PM No comments:

Plummer in Tempest next year at Stratford, Ont. 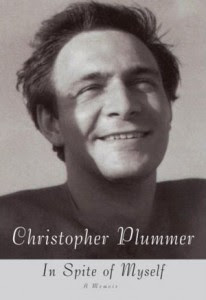 The Stratford Shakespeare Festival in Ontario, Canada will headline Christopher Plummer as Prospero in The Tempest, according to an August 26 report in the Toronto Star:


I am very excited to have Christopher Plummer return to the Festival for The Tempest, one of Shakespeare's most haunting and magical plays," said artistic director Des McAnuff, who will also direct the production.


Plummer's new biography,  In Spite of Myself: A Memoir published by Alfred Knopf is reviewed by Caldwell Titcomb on The Arts Fuse blog:


This huge autobiography is crammed with details. Plummer must have an extraordinary memory or carefully kept diaries – perhaps both. Hundreds of people, well known and unknown, pop up in these pages briefly or extensively. He does not spare himself, admitting to constant carousing throughout the first half of his life. From what he repeatedly tells us, it is a miracle that he did not succumb to cirrhosis long ago.

Posted by Linda Theil at 7:49 AM No comments:

Bill Marx reviews the Cambridge MA American Repertory Theater's The Donkey Show for The Arts Fuse blog in his Theater Review: The A.R.T. Shakes its Ass:


. . . In “The Donkey Show” Shakespeare’s romance exists solely to provide opportunities for gymnastic eye candy. Sweaty, nimble, and buff, A.R.T. cast members jump, skitter, climb, cavort, and undulate among the dancing party goers; they scamper up and down the walls, platforms, tables, and stairs in the cabaret-ized Zero Arrow Theater. Their colorful costumes are skimpy and glittery; the lighting glaring.

See the entire review at: http://blog.theartsfuse.com/2009/09/18/theater-review-the-art-shakes-its-ass/
Posted by Linda Theil at 8:44 AM No comments:

Dear Oberon,
Just a brief reminder that our regular September meeting will be this Wednesday, same place Farmington Community Library, and same time 7 p.m., doors open at 6:45.
We will have a packed meeting plus we will be introducing Marty Hyatt's handsome, thought provoking new poster promoting Oxford.  You will want a copy for yourself.
Many thanks to Linda Theil for hosting a great Oberon pot luck dinner at her home yesterday afternoon.  In addition to great food and great company, we were treated to a showing of the original PBS Frontline program, "The Shakespeare Mystery", which brought national attention to the authorship issue almost 20 years ago.  I do recall how instrumental that program was in getting my attention and in generating the greater understanding of Shakespeare and the much greater enjoyment of those great works which has resulted.  If you have never seen that program or haven't seen it recently, check it out online at PBS right now.
Tom Hunter, Oberon Chair
Posted by Linda Theil at 7:36 PM No comments: Prashant, his wife Annette, and Richard J. in the foreground
A happy crowd of 22 guests enjoyed the annual Oberon pot luck gathering yesterday in Howell. After our picnic on the porch, we watched the PBS Frontline special "The Shakespeare Mystery" originally aired in April, 1989. This twenty-year-old documentary on the authorship question remains fresh and forceful. The fact that the film introduced me to Charleton Ogburn, Jr. and his work made watching it in the company of like-minded friends especially pleasurable. Thanks to Ray for sharing his copy.
Posted by Linda Theil at 9:26 AM No comments:

In reviewing my "daily dose" of Doonesbury, I came across the installment from September 6, 2009. To see the actual comic (I'm not sure if I have the right to show it here in this blog), you can go to www.doonesbury.com/strip/dailydose/index.html?uc_full_date=20090906 or http://images.ucomics.com/comics/db/2009/db090906.gif
In the comic, Mark Slackmeyer (I think that's his name) is interviewing a "conspiratologist" named Page Griffin on his radio show and referring to American gullibility in that "Americans believe in many things that can't be verified."
The "conspiratologist" Page Griffin refers to some conspiracy theories such as truthism (that Bush was behind 9/11), birthism, JFK grassy knollers, and the staged moon landingists.
In the last two frames, Mark asks Page, "Professor, is there any counter to these powerful theorists?" Page answers, "Not really. Mark, only the Reasonists." Mark: "Reasonists?" Page: "They believe in an evidence-based world, something called Rationalism, but it's a tiny group, not so influential."
While many people would put our Oxfordian "movement" and the whole question of the Authorship of Shakespeare's plays into the "conspiracy" camp, I would prefer to think of us as members of the Reasonists. It seems like we (and other authorship groups) like to look at the evidence and see where it leads, rather that simply accept "revealed truth" or appeal to authority (as Sally Jenkins has done in her recent Washington Post article and follow-up discussion, see previous blogs for more details).
I have always said that I don't care if someone comes to the conclusion that the works were written by William of Stratford, as long as that person has actually looked at the evidence and truly decided that the evidence points to him as the author. (I would have a hard time believing that someone could come to this conclusion, but I wouldn't argue with the process).
But to ignore the evidence or pretend that anyone seeking such evidence either is some kind of "traitor" to literature or is "certifiable" (or has "taken a stupid pill") is not something that we can tolerate.
Up with Rationalism!

Click here to see a transcript of the live discussion with Sally Jenkins held at noon on Aug. 31, 2009.


I thought the discussion was pretty lame. Every time an anti-Strat made a comment, she didn't respond, she just dismissed the comment as if she'd found something dirty on her shoe. Here's an example:
Anonymous: There are a plethora of red flags that pop up in the Stratford Man's pretension of having created the Shakespeare canon. You mention none of them. Why is there not a single dedication to Shakespeare? Why not a single link between the works and the man from Stratford until 1623? How could an uneducated man, before public libraries and the first english dictionary, bring 3,000 new words into our language? Surely a highly tutored royal, with time to spare, and experts to hire, would be a more plausibe author, don't you think? read what "amateur" Walt Whitman says on the matter!
Sally Jenkins: A classic statement of anti-man-from-Stratford sentiment. Thanks for writing.


Still, they say all publicity is good publicity.