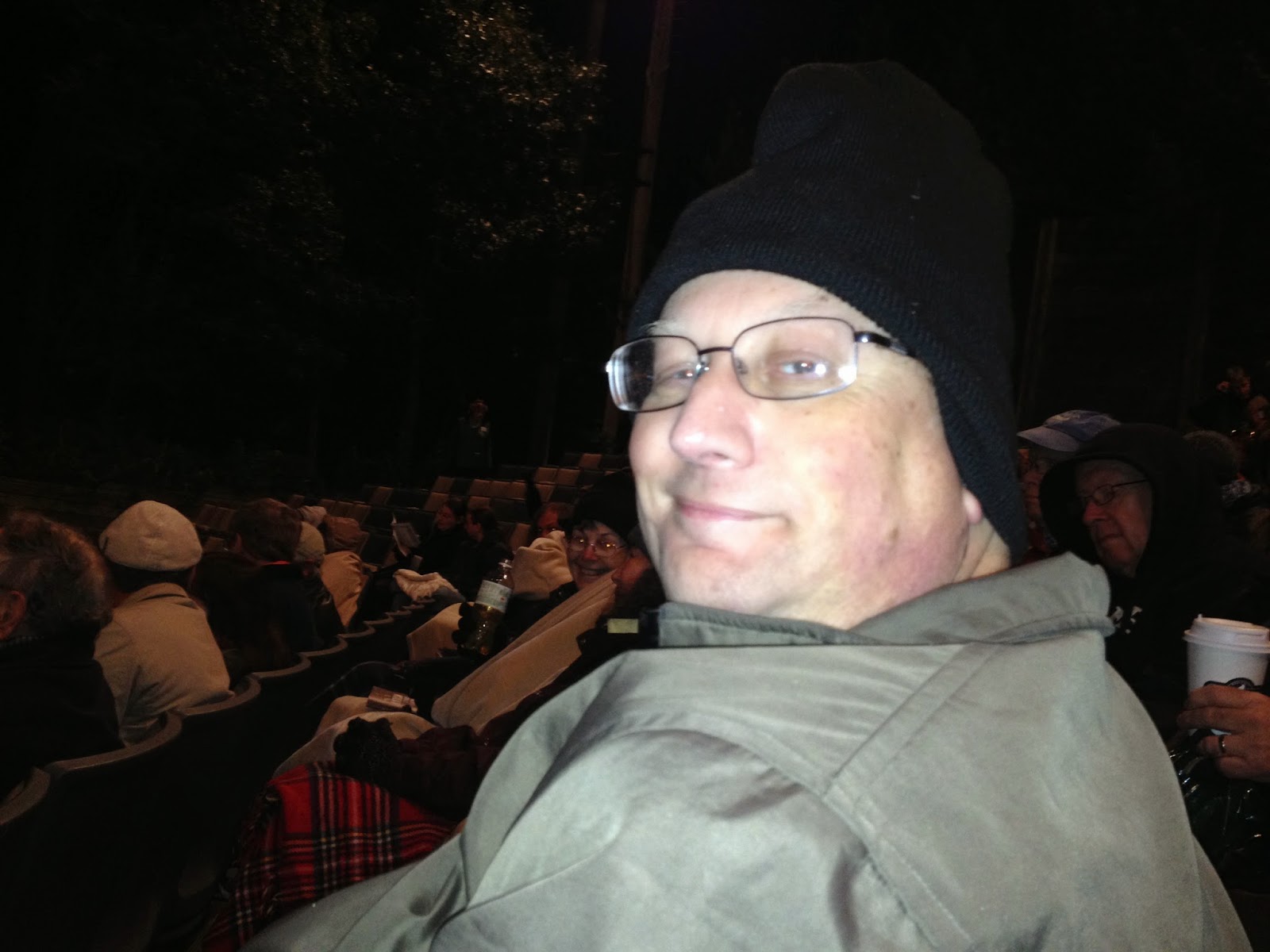 Richard Joyrich, Ron Halstead, and I attended the Shakespeare Oxford Fellowship conference in Madison, Wisconsin September 11-14. Richard is secretary to the SOF board and served on the conference committee; Ron presented on the topic of "What's Hecuba to Him? Connecting Life and Drama in Hamlet"; and I gave a speech on mobile-media basics. 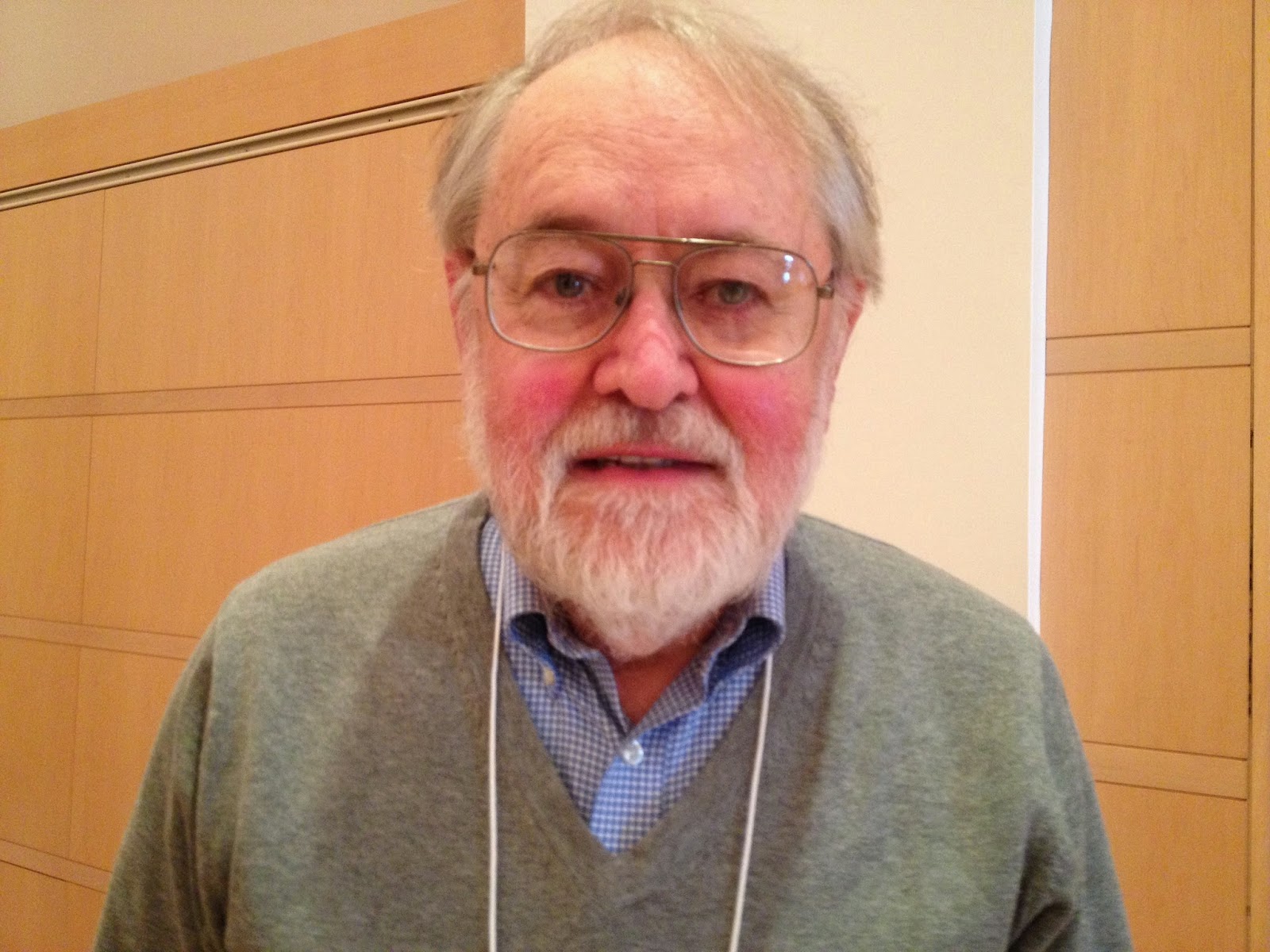 It was a lot of fun! And I'm hoping Joyrich will post his notes on the entire event. 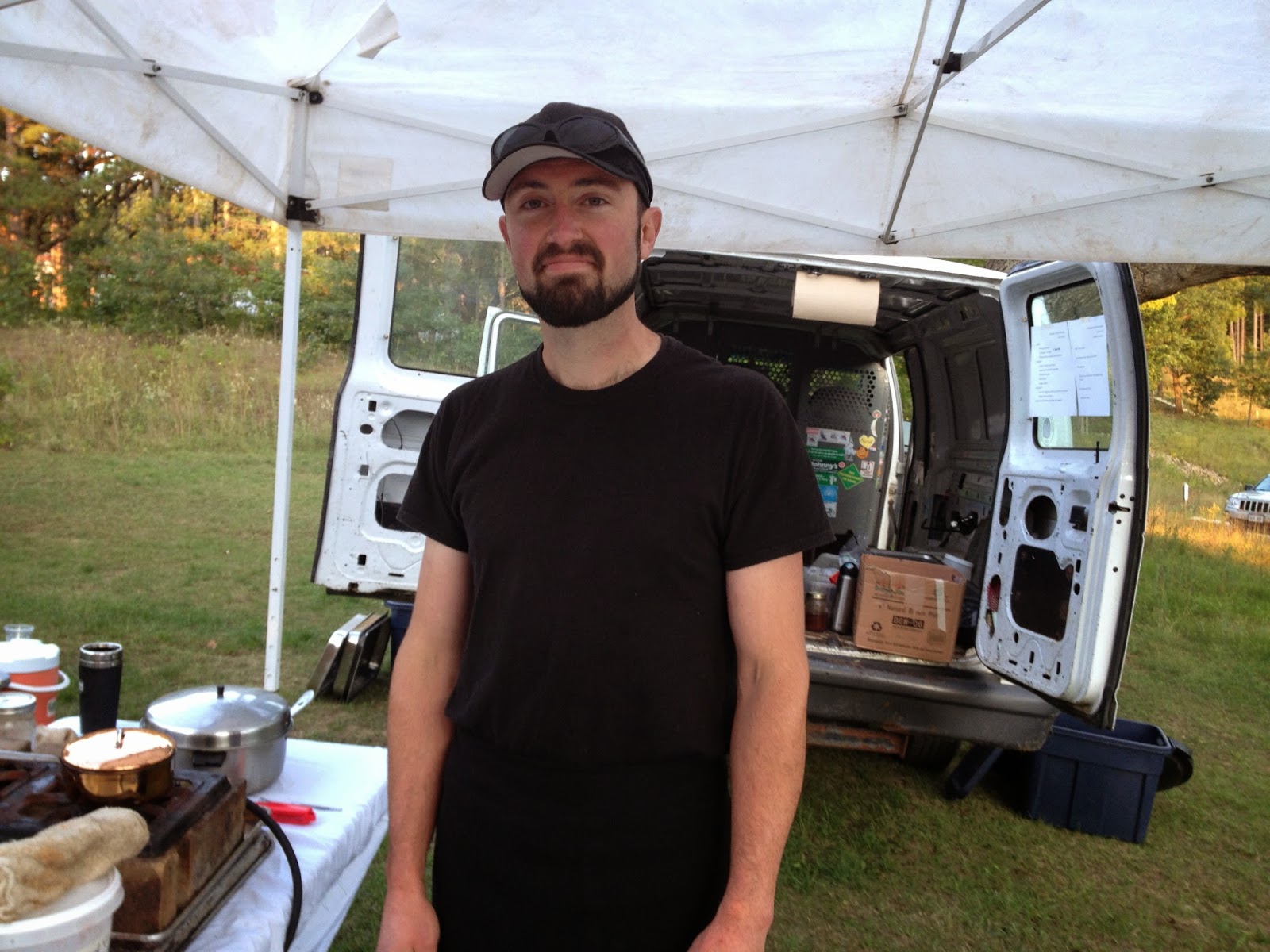 On Saturday night we all went to the American Players' Theatre in Spring Green where we had a great picnic prepared by chef Jeremy Lynch of Enos Farms. We had tickets to the APT production of Much Ado, with David Daniel -- who entertained us with theatrical insight during dinner -- as Benedick.

But as the night got darker, the world got colder and I cravenly retreated to the bus during the second half of the performance. Richard, however -- nothing daunted -- enjoyed every word.

The conference was held in the Overture Center which was absolutely gorgeous. 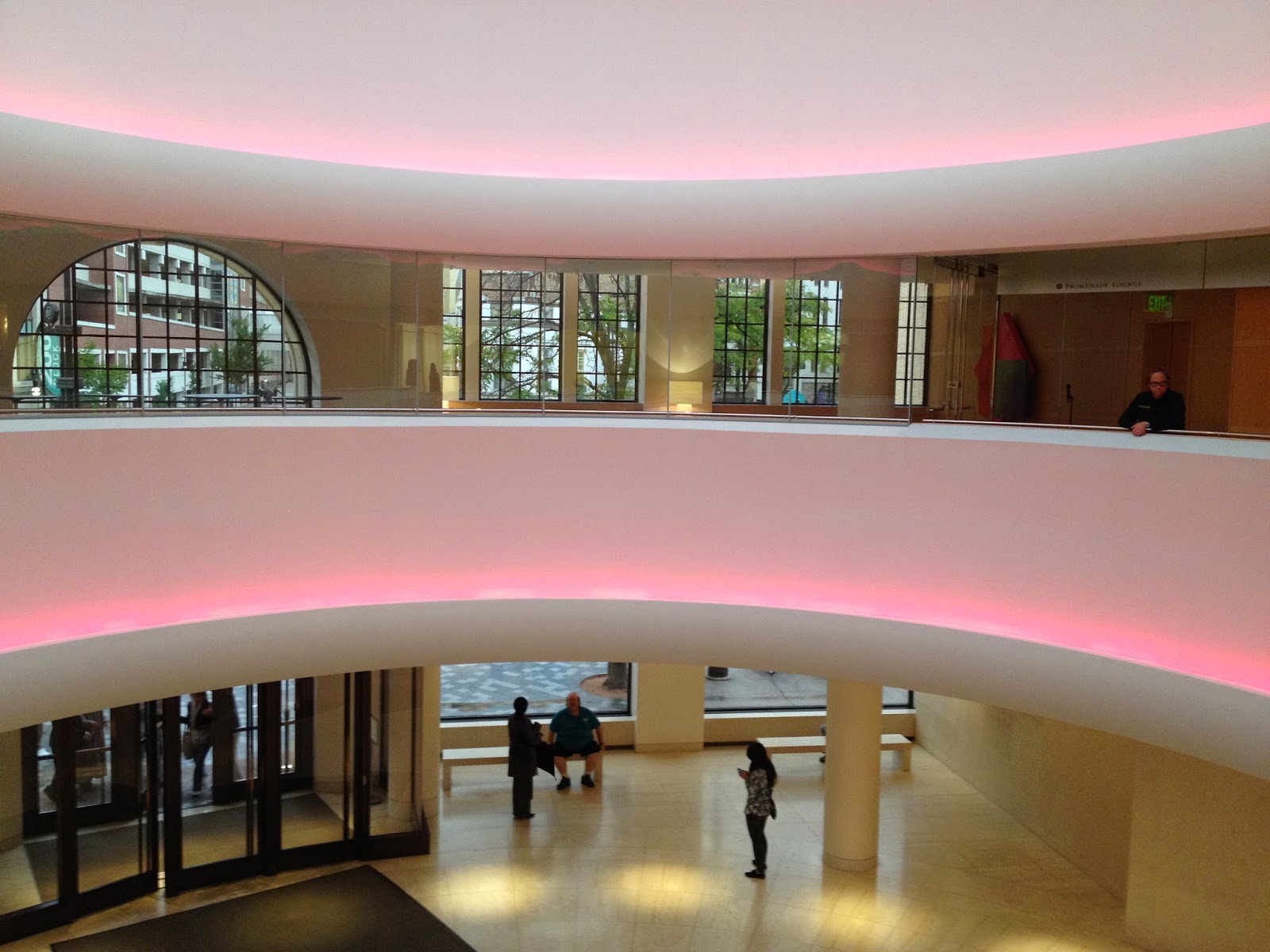 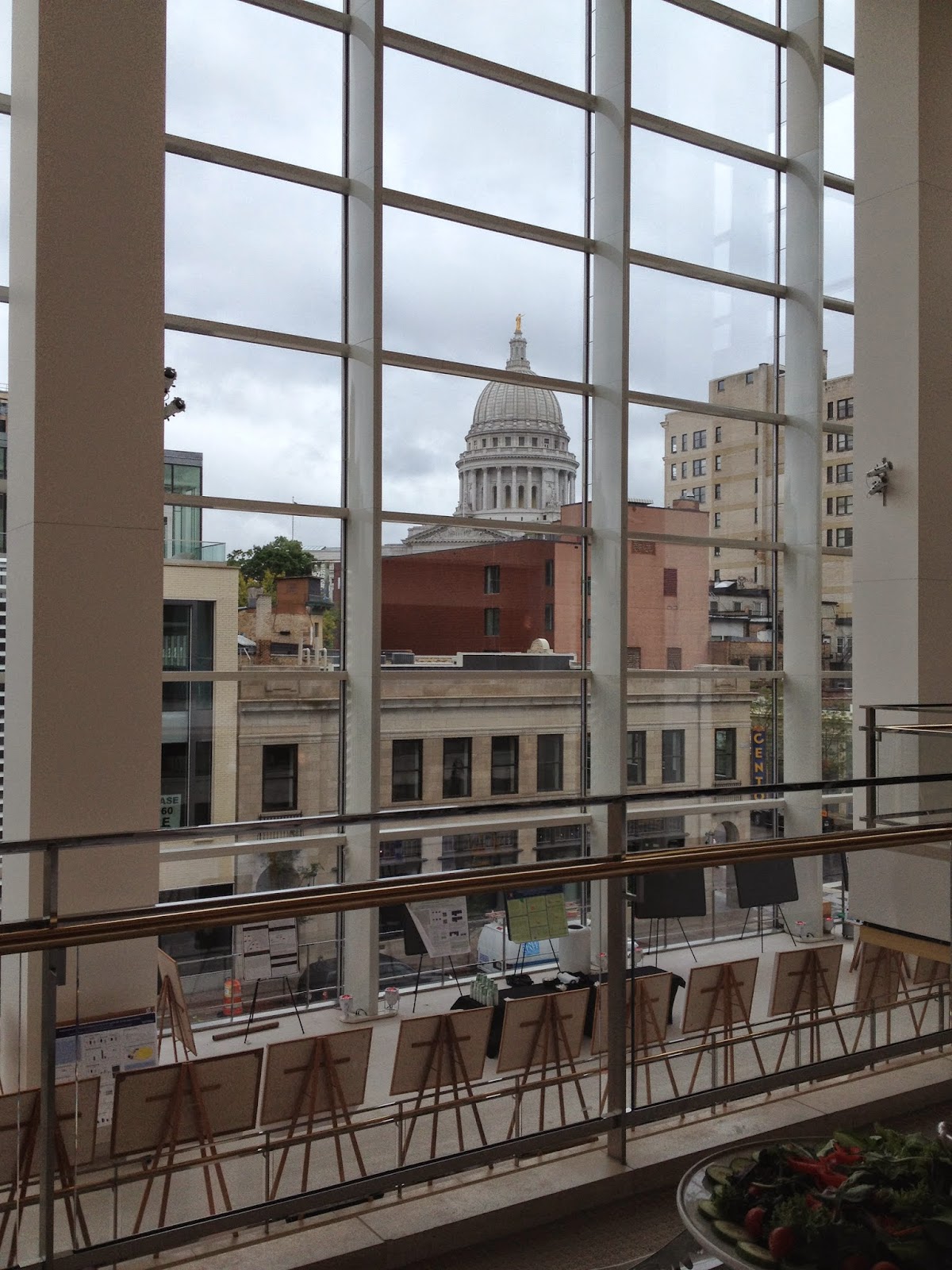 Madison, WI from Overture Center mezzanine where we had lunch Sept. 12, 2014

Our event coordinator from the center was Janet Knoeller, who did a wonderful job of making sure everything went perfectly during the conference. She told me she became a convert to the post-Stratfordian point-of-view after listening to the presentations. "This is the most interesting conference I've ever coordinated," Knoeller said. "I told my husband about it and he said, 'They've been talking about that for ten years.' I told him, 'They've been talking about it for over a hundred years!'" 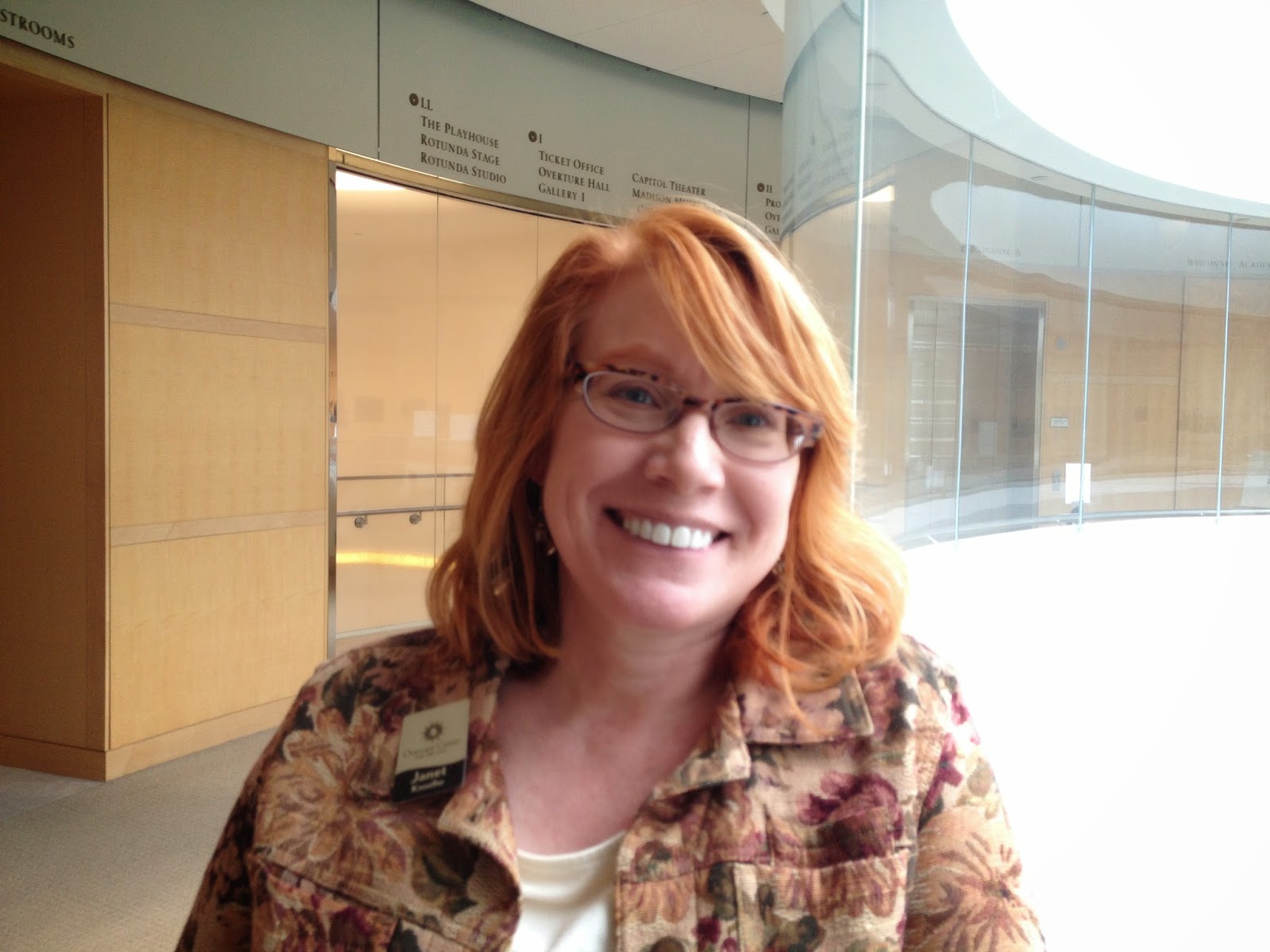 SOF webmaster Jennifer Newton and I shared duties blogging, and tweeting, and posting to Facebook at the conference, but we took a break to enjoy the sunshine on on the streets of Madison during Saturday farmers' market. 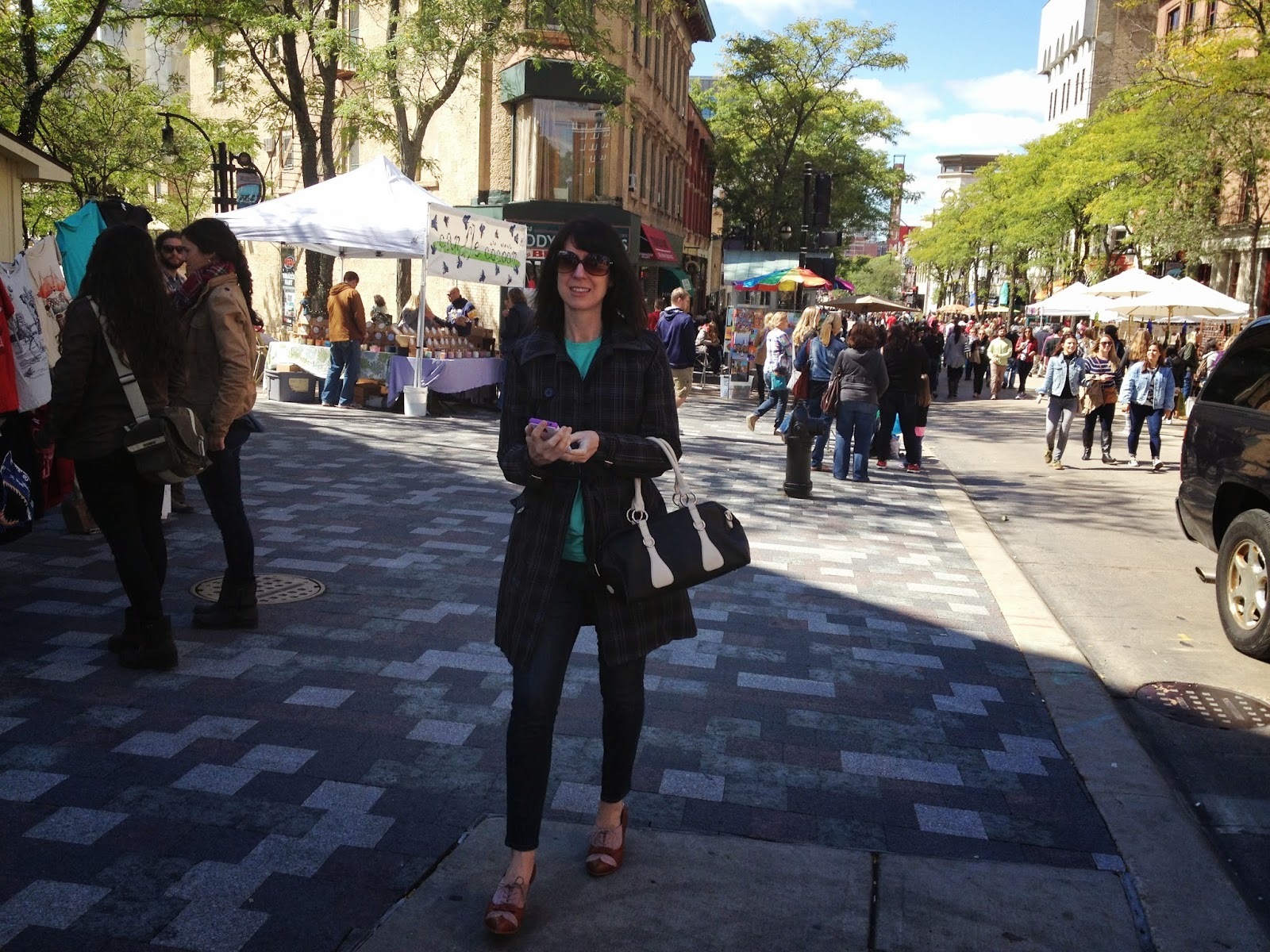 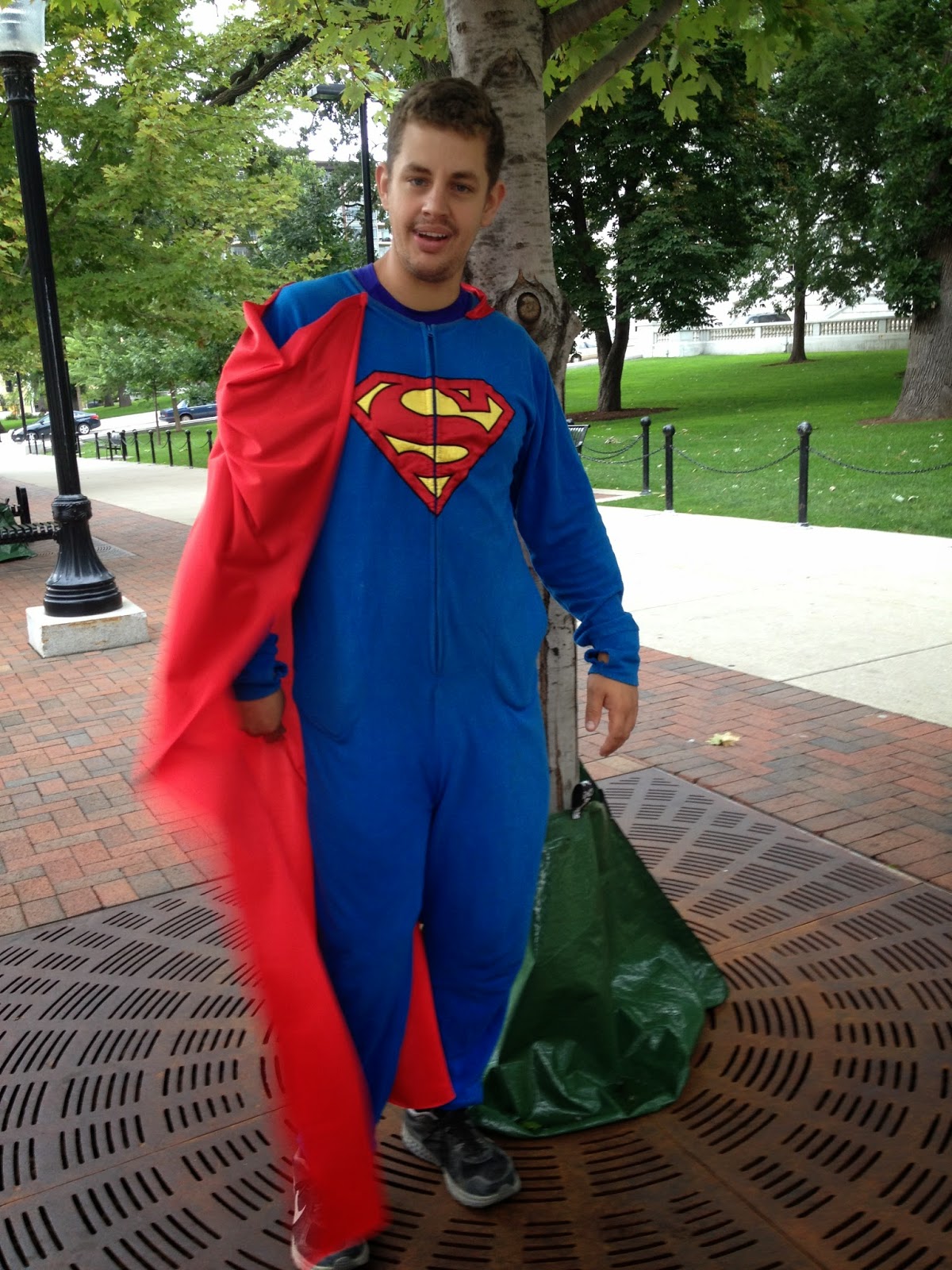 Superman visited Madison while we were there!

For more conference news, check out the Shakespeare Oxford Fellowship news page where I wrote several posts about conference events:
Posted by Linda Theil at 2:08 PM 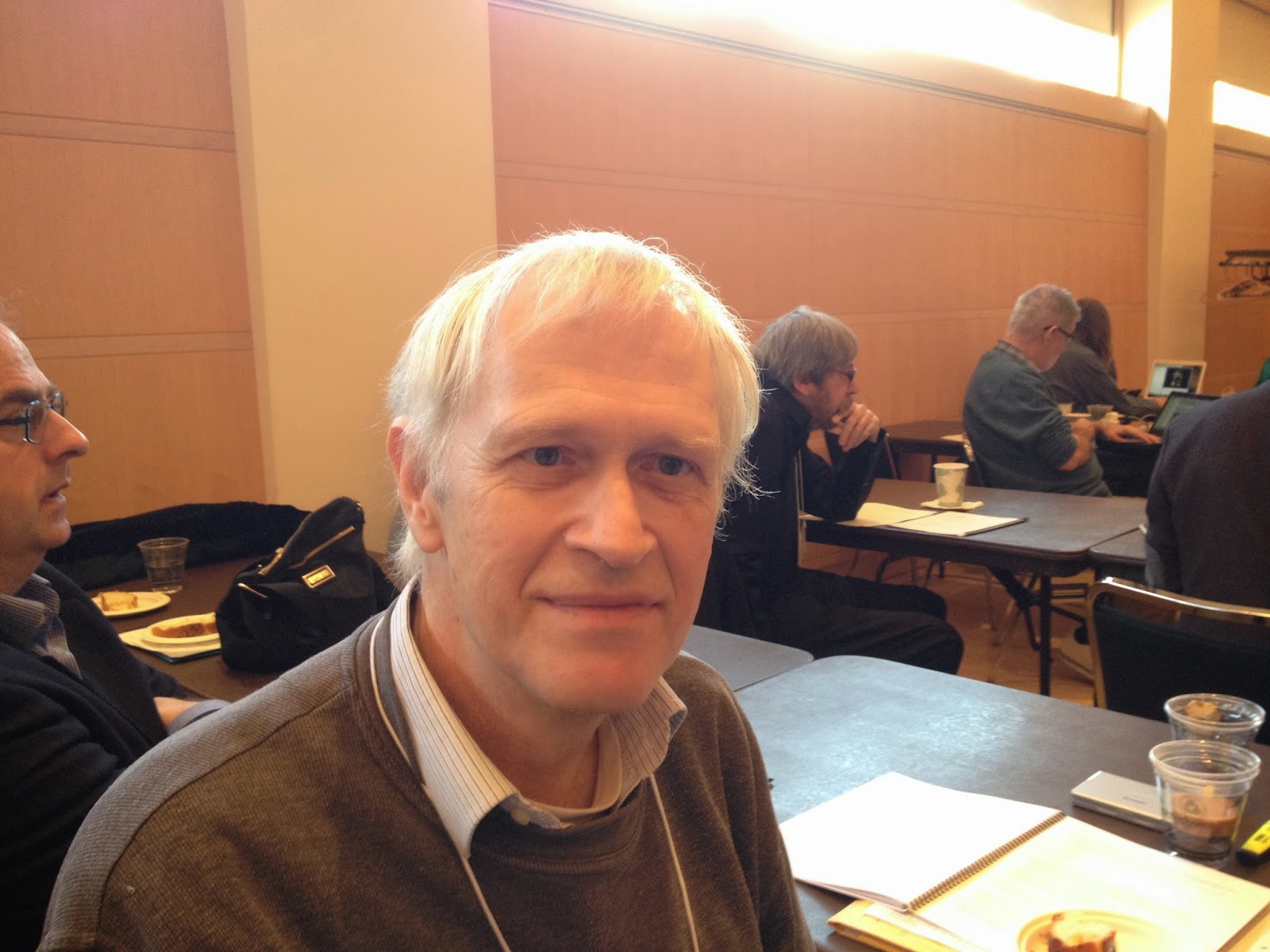 Hanno Wember, board member of The New Shakespeare Society in Hamburg, Germany
at the 2014 SOF conference in Madison, WI
by Linda Theil
Once again our Hamburg correspondent, Hanno Wember of Neue Shake-speareGesellschaft (New Shakespeare Society) brings word of post-Stratfordian thought in northern Europe with his report on a new book by Swedish author Martin Tegen published by Themis of Stockholm.

The book is titled Vem var Shakespeare? Sonetternas gåta, which translates: Who Was Shakespeare? The Riddle (or enigma) of the Sonnets. 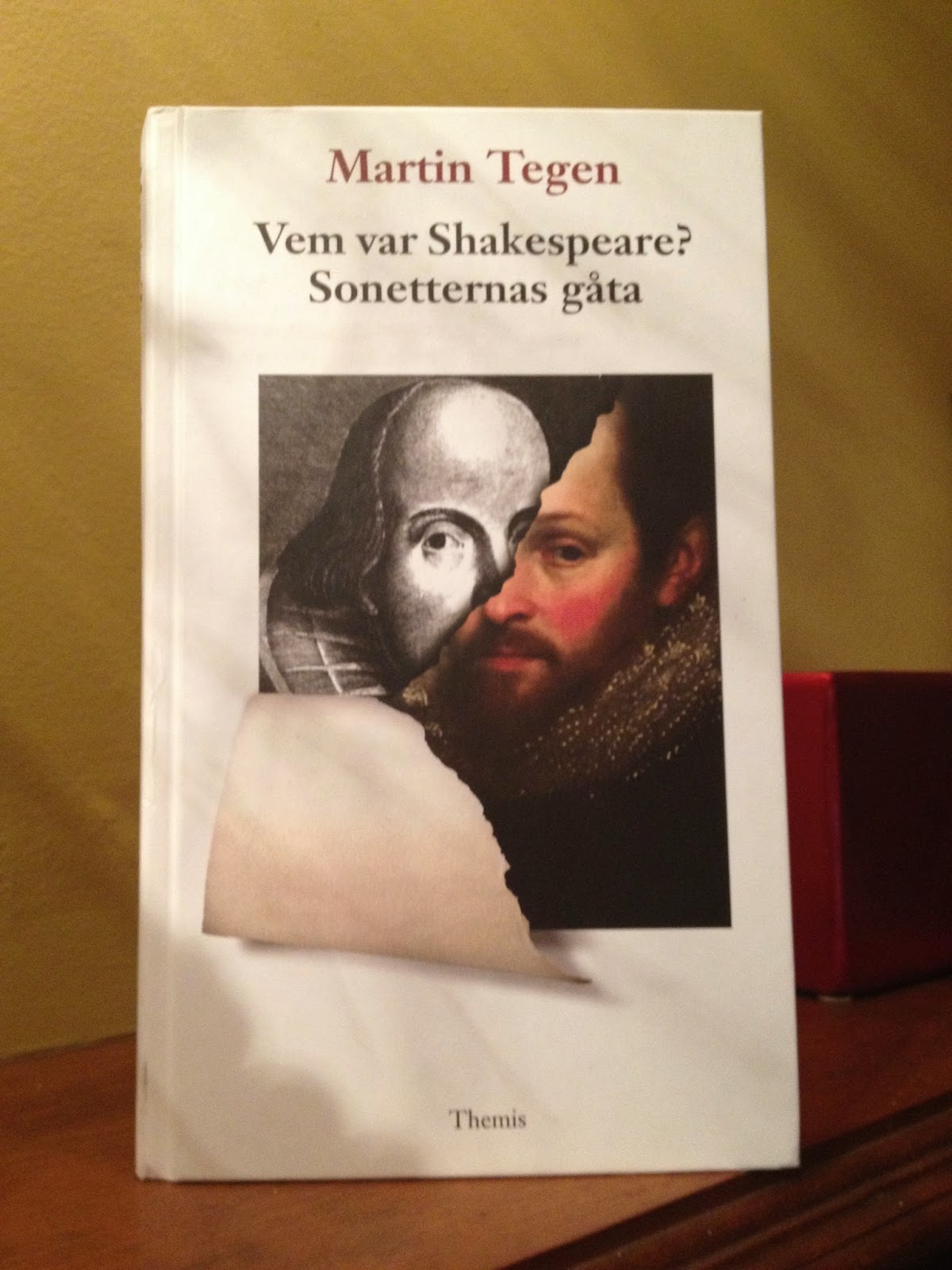 Wember says that part of Tegen's thesis is that the author of Shakespeare's works was a musician and he links de Vere to the works through de Vere's own musicianship.

Wember provides the following information translated from the publisher's website:

Who is hiding behind the name of the author Shakespeare? The first time the name of the author William Shakespeare emerges is the verse epic story of Venus and Adonis 1593. Many saw in it an allegory about the Queen and her "virginity". Is it - wonder the same queen who also appears in Shakepeare's sonnets as the dark lady? Martin Tegen's first book to publishers Themis was his interpretation of Shakespeare's sonnets and verse narratives for which he received the Society of the Nine översättarpris in 2007.

Martin Tegen, born April 28, 1919 in Uppsala, Sweden, is a Swedish music researchers, university teachers and translators. Martin Tegen became PhD in 1955, and then served as Assistant Professor (1956-1969) and Associate Professor (1964-1984) in music research and musicology at Stockholm University.Martin Tegen is an expert on 1800s Swedish music and musical life. He is a member of the Royal Academy of Music and was rewarded in 2004 with a scholarship from Hilding Rosenberg Fund for Swedish musicology. After his retirement Tegen has launched a second career as a translator of classical literature, including William Shakespeare and Rainer Maria Rilke.

Stratfordians have nowhere to squat 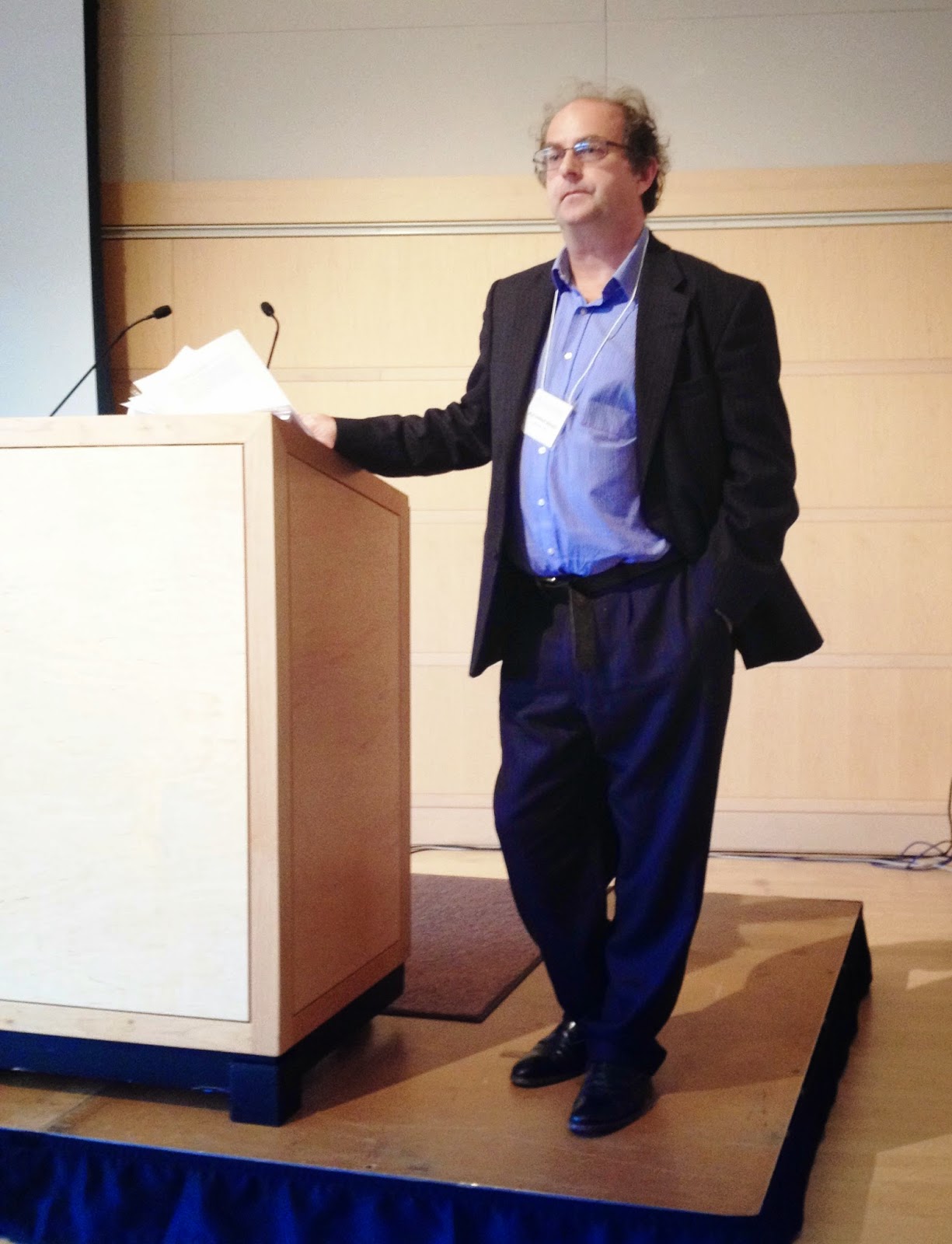 Ron Halsted, Richard Joyrich and I attended the 2014 Shakespeare Oxford Fellowship conference in Madison, WI Sept 11-14. Alexander Waugh flew in from England to present two papers: one on the bogus nature of the Shakespeare Birthplace Trust site, and the second on Ben Jonson's "Sweet Swan of Avon" reference in the First Folio that appears to place the author of Shakespeare's works on the banks of Stratford on Avon.

Waugh's essay on the topic of Shakespeare's birthplace appears in his just-published Kindle Single ebook titled, Shakespeare in Court, and is available from Amazon for $1.99 at http://amazon.com/Shakespeare-Court-Kindle-Single-Alexander-ebook/dp/B00NFFP3OU. A Kindle reader is available at no cost from the site. Preview available here. 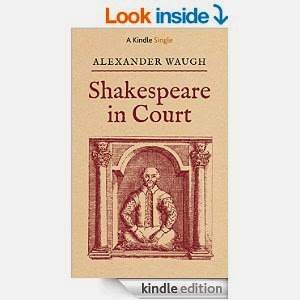 Waugh's essay on Jonson's "swan of avon" is published in the latest editon of the SOF journal, The Oxfordian, that is available to SOF members -- information at http://www.shakespeareoxfordfellowship.org/the-oxfordian/.


So it would appear that Hampton Court was anciently known as “Avon”. Camden’s source was Leland’s Genethliacon of 1643, but this was by no means his only reference to the Royal palace as “Avon”. In his Cygnea Cantio (1545) Leland explained that Hampton Court was called “Avon” as a shortening of the Celtic-Roman name “avondumun” meaning a fortified place (dunum) by a river (avon), which “the common people by corruption called Hampton.” This etymology was supported by Raphael Hollinshed, who wrote in this Chronicles (1586) that “we now pronounce Hamton for Avondune.
Edward de Vere’s tutor, the antiquarian Laurence Nowell, also knew of this connection because he transcribed, by hand, the complete “Syllabus” from Leland’s Genethliacon, which contains the  entry: “Avondunum, Aglice Hamtoncourte.” Historian William Lambarde, in his Topgraphical and Historical Dictionary of England, written in the 16902, includes an entry for Hampton Court, which, he writes, is “corruptly called Hampton for Avondun or Avon, and usual Names for many Waters within Ingland.”

So, one of the three shaky legs (i.e. title pages attributing work to Shakespeare, the Stratford monument, and Jonson's reference to the swan of Avon in the First Folio) of the Stratfordian attribution is sawn off by a British iconoclast who revels in challenging the status quo.

Since the title pages are meaningless, the monument is fraudulent, and now the First Folio leads to the site where Shakespeare's plays were originally offered to the court, the Stratfordian stool is legless.

The true story of "Shakespeare's Mulberry Tree" of Stratford-upon-Avon is not generally known, even though it was seminal to the development of William Shakespeare as the cultural icon he is today. Keir Cutler, who possesses a PhD in theater, tells the fascinating real life account in this short and revealing essay.

Beginning with Shakespeare’s death in 1616, Cutler succinctly takes the reader on a historical journey that provides food for thought for the open-minded thinker. If William of Stratford was the writer of the famous plays and poems, why was nothing ever found in his hometown connecting this man to the great works? Why are there no plays, poems or even any letters in Shakespeare’s own hand? And most significantly, why would the mulberry tree in back of his former home in Stratford become “one of the most valuable assets of the town?”

“Shakespeare’s Mulberry Tree” is a true story few professors ever tell their students because it is difficult to maintain the strict orthodoxy that there is no Shakespeare Authorship Question once this important piece of history is known.

"Shakespeare's Mulberry Tree is available in epub, mobi, pdf formats and also available to read online from the Smashwords site at https://www.smashwords.com/books/view/466896. Cutler also has a performance on this topic available on YouTube under the title "Shakespeare Authorship: The Mulberry Tree".