News from John Shahan at the Shakespeare Authorship Coalition

Note: The information at the Contrary Views pages mentioned below is a particularly cogent and beautifully crafted response to Stratfordian bluster. LT
Letter from John Shahan:
The Shakespeare Authorship Coalition (SAC) is pleased to announce that Sir Derek Jacobi has agreed to join Mark Rylance as a Patron of the SAC. As you may recall, Mark and Sir Derek teamed up to launch the Declaration of Reasonable Doubt in Chichester, England, last year following the final performance of Mark's play, "I Am Shakespeare." The event, held on 8 September (dubbed "Doubters' Day"), was a smashing success; so we are pleased to be able to keep this outstanding team together. Sir Derek has long been an outspoken supporter of the view that the Shakespeare Authorship Issue should be taken seriously. It is therefore extremely gratifying to us that, in addition to very publicly signing the Declaration, he is also willing to serve in this capacity. Thank you, Sir Derek Jacobi!
Although the Shakespeare Birthplace Trust (SBT) declined our invitation to participate in the declaration-signing event in Chichester, we certainly got their attention. The September 27, 2007, issue of The Stage magazine featured an article by SBT Chairman Stanley Wells in which he criticized Mark and Sir Derek for signing the Declaration, warning them that they risked ending up in a lunatic asylum, like Delia Bacon. ("Beware, Mark and Sir Derek!") Openly angry at the Declaration, and especially at Mark and Sir Derek for promulgating it, Wells nevertheless controlled himself long enough to offer a number of specific criticisms.
The current issue of The Stage contains Mark's reply, in which he refers readers to the SAC website where they can read Prof. Wells' original article, Mark's reply, plus a point-by-point rebuttal to Wells' specific criticisms of the Declaration. To read this online "debate," go to the Contrary Views page on our website. See for yourself who has the better argument -- Mark in saying there's reasonable doubt, or his former Globe Theatre colleague, Wells, in claiming certainty?
(The entire exchange can also be read and downloaded in PDF format at the website of the Shakespearean Authorship Trust, of which Mark Rylance is chairman. The SAT will be holding its annual lecture series in London during the month of November again this year. Please check back at their website closer to that time for the specifics of the SAT lecture series.)
Over 1,300 people have now signed the Declaration, including more than 1,000 since the Chichester event. These include 223 (17%) current or former college/university faculty members, 177 (13.5%) with doctoral degrees, and 274 (21%) with master's degrees. The largest category by academic field continues to be English literature graduates (222), followed by those in the arts (134), theatre arts (89), education (80), math, engineering & computers (70), social sciences (68), history (64), natural sciences (57), medicine & health care (55), law (53), other humanities (52), management (45), and psychology (40). (The number residing in lunatic asylums was minuscule, so relax, Professor Wells.) We urge everyone to continue your efforts to recruit additional signatories, especially academics and other highly credible individuals. The Declaration is the best brief introduction to the authorship issue.
Finally, we would like to ask for your support. As a non-membership organization, the SAC charges no dues. We depend entirely on voluntary donations. We publish no newsletter, hold no conferences, and charge no fee to sign the Declaration. We are completely focused on promoting the Declaration, and on legitimizing the Authorship Issue in academia. Our expenses are low, but we do need money to operate our website, collect signatures, and seek publicity. Even small donations ($10 - $20) are very helpful. Please visit the Donations page on our website and make a tax deductible donation today, or send a check to: Shakespeare Authorship Coalition, 310 North Indian Hill Blvd., #200, Claremont, CA 91711.
Thank you very much.
Sincerely, John Shahan, SAC Chairman
Posted by Linda Theil at 4:36 PM No comments: 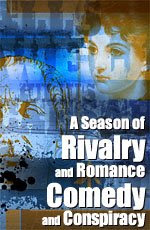 Join the Oberons on July 19 for our annual trip to the Michigan Shakespeare Festival at the Baughman Theater in the George E. Potter Center on the campus of Jackson Community College in Jackson, Michigan.

Everyone is welcome to join us. If you see a herd of Oxfordians, please come up and say, hi!

Posted by Linda Theil at 6:05 PM No comments: