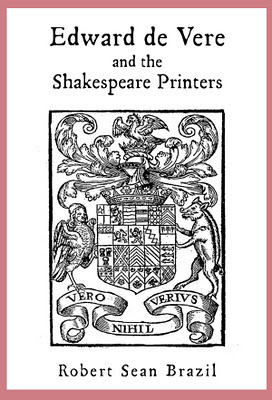 “I found out he had written this book and he had published it as a Kinko copy (in 1999),” Foote said in a telephone interview on January 8. “And I’m not prepared to let this slip away – it is his life’s work and I wanted to see it preserved.”

Although he had been long out of contact with Robert Brazil, Foote contacted Brazil’s brother, Tony Brazil, and received a copy of the contents of Brazil’s computer along with permission to publish Shakespeare Printers under the copyright of Brazil’s son and heir Jessie Brazil.

“I had no trouble at all getting approval from the brother and sons,” Foote said. “They were delighted that I picked that up.”

Foote also enlisted the aid of Robert Brazil’s friend, Lisa Duff -- owner of the audio-book publishing firm, Wetware Media, LLC -- who advised Foote on the publishing process. He used the Amazon print-on-demand company CreateSpace as printer of the volume and published under the name of his Seattle research firm, Cortical Output, LLC. The book was released on Brazil’s birthday, November 19, 2011, with all profits going to Brazil’s heirs: Jessie Brazil and David Brazil. “We want to keep the price moderate; their priority is to get the widest circulation,” Foote said.

Foote expects to release an electronic version of Shakespeare Printers by spring this year. He does not rule out the possibility of further publication, although he found no other books in preparation among Brazil’s electronic effects.

(UPDATE 02/09/13: This book is available as a Kindle edition from the Amazon website at: http://www.amazon.com/Edward-Vere-Shakespeare-Printers-ebook/dp/B007NA5MYY)

“I looked over his disk files that Tony sent. I went over them almost file-by-file; there are thousands of them. I found various versions of stuff that’s in the book; the contents of the book is not that different from the contents in the 1999 version. The thousands of files I saw were more like primary research data, not manuscript drafts.  [Robert Brazil] wrote that this was going to be the first volume of a multi-volume set, but I didn’t find subsequent volumes. There were the beginnings, and discussions with people about Oxfordian issues.  It may be at some point a genuine Oxfordian scholar could go through these and recognize the significance of these. That would be a privacy issue, but I think Tony [Brazil] would be amenable.”

Foote and Brazil were childhood friends who attended school together in Tarrytown, New York.  Foote said they had a teacher at Sleepy Hollow High School who was passionate about Shakespeare and an advocate of the Oxfordian authorship attribution, but Foote didn’t think this teacher was the main influence on Brazil. Foote himself had no real knowledge about the topic until he took on Brazil’s book project last year.

It’s been interesting to me to look into this world. I’m a scientist; so in a way it’s not new.  I deal in a field where every fact is suspect.  It was interesting to see the players and the arguments back and forth. I’m developing an impression. It’s so interesting this controversy. I read all the reviews of [Emmerich’s film] Anonymous and there were three things that were striking about them:

My impression of the  Stratfordians is pretty bad.They're academics and they come off as a bunch of pompous twits. The Oxfordians come off, to me, as the ones with energy: tracking down leads, finding new evidence, thinking about it, talking about it, maintaining an active discussion. And I understand Robby himself digitized a lot of Elizabethan literary works and made them available on the Internet, free, for anyone, for any purpose.

Foote refers to the Elizabethan Authors website created by Robert Brazil and Barboura Flues that is currently available at elizabethanauthors.org.

When asked about why he took on this remarkable project in his friend’s memory, Foote said, “I’m from a small town and we take care of each other even after one of us has passed on.”

Foote is researching what became of the material on Brazil’s website earlofoxford.com. He is amenable to hearing from Oxfordians and may be reached at mailto: jfoote@oz.net.

This description of the book is provided on Amazon.com:
Dozens of important books from the Elizabethan era praise Edward de Vere, the 17th Earl of Oxford, for his patronage of literature in general, and for encouraging the creation and publication of specific works. In sheer numbers, William Cecil and the Earl of Leicester patronized more books. But "Oxford's Books,” have a robust, hyper-intelligent and even bawdy character, a special collection in publishing history because they form the reading matter and the linguistic universe in which "Shake-speare", as poet and wordsmith, resided. The Oxford books are pivotal pieces of the literary Renaissance in England, and these books are found reflected in the themes and language of the Shakespeare plays. Could de Vere have been the true author of Shakespeare's plays and poetry, using the man from Stratford as a front? In the first half of this volume, Robert Brazil gives a lucid explanation of the Shakespeare/ Oxford authorship question. In the second half, Brazil adds his own findings to this complex and contentious playing field. Through association with specific printers and publishers, Brazil links de Vere to the men who first printed "Shakespeare.” These printers and sellers turn out to be key suppliers of works classified as Shakespeare apocrypha, as well as works that Shakespeare drew upon, the so called "Sources of Shakespeare,” which include everything from Holinshed's chronicles, to translations, anonymous plays, poetry, and editions of the Psalms. Following the existing paper trail, Brazil additionally shows that "Shake-speare" edited his own books, for improved published editions, but only from 1598 to 1604. After 1604, the year of de Vere's death, access to texts and to the original editor was permanently interrupted.

A portion of Edward de Vere and the Shakespeare Printers is readable on the Amazon site; the acknowledgments in the book read:
"Thanks to my friends and family who have supported this endeavor with encouragement and bemusement: The Right Reverend David Z. Brazil, The Right Honorable Dr. Percy Brazil, Jessie Brazil, Lisa Duff. And many thanks to my far-flung fellow researchers and correspondents: Mick Clarke, Barboura Flues, Nina Green, Andy Hannas, Roger Stritmatter, and Dr. Jack Shuttleworth." Signed Robert Sean Brazil, 2010