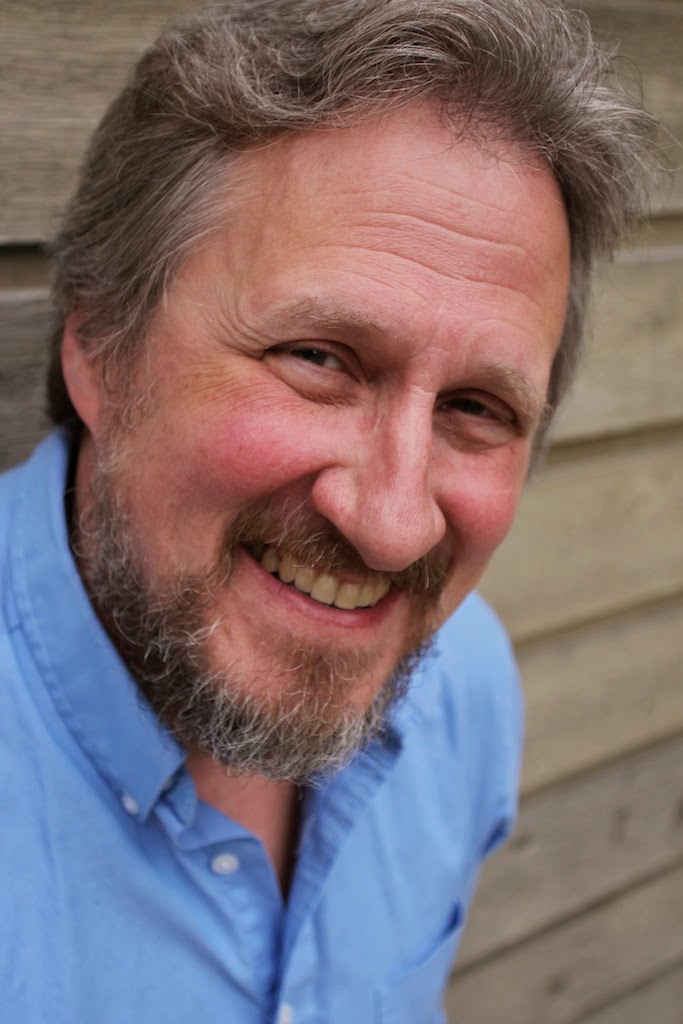 David Montee, PhD has distilled 30 years of teaching "Acting Shakespeare" at Interlochen Center for the Arts into Translating Shakespeare: a Guide for Young Actors published in August 2014 by theater book publishers Smith & Kraus.

Interlochen is the venerable and prestigious arts center near Traverse City, Michigan that is noted for its full-time education of talented youth. Last month, Montee gave a reading and presentation of his new book on the Interlochen campus, and he will make a presentation from 3-5 p.m. on November 22 at Horizon Books, 243 E. Front Street in Traverse City.

Oberons may remember Montee as Shylock in an Interlochen production of Merchant of Venice reviewed by our late chairperson, Tom Hunter in July, 2011. Hunter said:


His performance not only avoided the clown Jew stereotype, but was done with an ideal mix of understatement and intensity which accurately showed Shylock’s descent into tragedy. I have no idea if this was a conscious choice by Mr. Montee, but conscious or not, the result was the Shylock which I believe most closely achieved Shakespeare’s intentions of all of those I have witnessed in many other recent productions.


Translating Shakespeare seeks to make the actor’s preparatory work on the Bard’s plays both stimulating and fun by de-mystifying the experience. It offers step-by-step explanations of the fundamental processes involved in creative preparation: comparing edited texts, analyzing verse rhythms, identifying antitheses, and most importantly, helping the actor to find his or her own personal key to unlock the plays’ contexts and circumstances in an inspiring way. Offering many specific examples from the plays in each chapter to illustrate the topics covered, the book concludes with detailed approaches to six Shakespearean scenes, applying all of the work covered in earlier chapters to a practical rehearsal approach.

After a 2011-12 sabbatical that he spent in part writing Translating Shakespeare, Montee is back in the classroom at Interlochen where he spoke to your Oberon reporter about his work, his book, and his view of the Shakespeare authorship question:

Oberon: Do you care to say a word about Interlochen and your work there?
Montee: I've been at Interlochen for 27 years, as a teacher, director, administrator, and -- occasionally -- an actor. It's been the center of my creative life for many, many years, and I've been fortunate to have had the chance to teach and work with an incredible number of students who have gone on to make their talented presence felt in professional and educational theatre, in films and TV, and in all other aspects of life. It's been an amazing artistic journey for me.

Oberon: Does Interlochen have an annual Shakespeare festival?
Montee: Yes it does.  As a member of Actors' Equity, I've acted in three shows in the last several years, playing Shylock in The Merchant of Venice, Polonius in Hamlet, and Malvolio in Twelfth Night. This coming summer I've been asked to do Jaques in As You Like It.

Oberon: When did you write Translating Shakespeare? Would you tell us about your process?
Montee: I was granted a full year sabbatical from Interlochen during the academic year 2011-12. I was stepping down from my 21-year position of Director of Theatre, during which I was responsible for the leadership of all Academy and Camp theater programs. During that sabbatical year, I travelled, did some professional acting, some guest teaching at other venues -- and wrote the first draft of this book. The book was intended to expand and elaborate on the Acting Shakespeare class that I have taught every year at Interlochen for the nearly 30 years I have been associated with the institution. It follows the basic outline and approach of that class, but covers all the subjects in much more depth. It attempts to help the young actor to understand the techniques of verse analysis, marry the modern Stanislavskian acting approach to the particular demands of heightened language, and -- most importantly -- help them "translate" Shakespeare's characters and situations into personal dramatic contexts that are meaningful in their everyday lives. The last of the book's eight chapters deals with moment by moment analyses of six Shakespearean scenes, using all of the lessons of the earlier sections: scenes from Hamlet, Macbeth, Othello, Twelfth Night, Two Gentlemen Of Verona, and Richard III.

Oberon: Why did you decide to write Translating Shakespeare, and what do you hope will be its benefit to readers?
Montee: I've been wanting to have the time to write the book for the past decade, but the sabbatical finally gave me the freedom I needed. It is primarily intended to help young actors get over their intimidation over performing Shakespeare by giving them the knowledge they need to find it exciting and inspiring. I also hope that folks who are non-actors -- but interested in finding out more about the Bard -- will find it interesting and informative as well. All in all, it's a way to honor all of the students who have worked with me in class and in the production of over half the Shakespeare canon on stage -- and all that they have taught me over the years.

Oberon: As you know, our readers are interested in the Shakespeare authorship question. Is the question of Shakespeare's identity important to you?
Montee: Like many others, I'm fascinated to read the various books and treatises on the authorship question. I believe that just reading all the theories illuminates possible interpretations of the plays in fascinating ways. If nothing else, they teach me more and more about the historical and social settings that gave birth to the Elizabethan, Jacobean and Carolinean theatre in general, and Shakespeare's works in particular.

Oberon: Are you interested in Shakespeare's identity?
Montee: I am, but am pretty much resigned to the idea that it will undoubtedly remain an unresolved question, failing some hidden document being uncovered somewhere.  And I actually kind of like the mystery!

Oberon: Have you studied the issue?
Montee: I have, and have read some fascinating books on it. Besides the slew of Oxford books that have been so popular of late, I was particularly taken with the recent books by Sabrina Feldman, especially The Apocryphal William Shakespeare, Book One. Although I'm not sure I'm ready to buy her candidate (as revealed in Book Two, of which she's kindly sent me an advance manuscript for my thoughts), I think her ideas in Book One are revelatory, and tell us interesting things about the Elizabethan processes of developing plays for the theater of the time. I recommend them as very entertaining and informative reading.

Oberon: Are your students interested in the authorship question?
Montee: They are in a vague way. Happily, I think (as actors) they're much more interested in how the scripts work on stage -- whomever they were authored by!

Oberon: Does the identity of the author have meaning and usefulness to teachers and students who use your book?
Montee: I don't really think so, not directly anyway. For actors and directors, the plays are blueprints for performances; and the book is aimed at helping actors, both young and old, in interpreting those blueprints in the most theatrically effective manner possible. 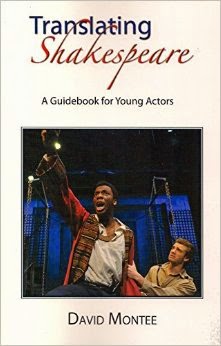 David Montee is available for readings and presentations of his new book, Translating Shakespeare: a Guide for Young Actors and may be reached at <mailto:monteedd@interlochen.org>.

By Linda Theil August 06, 2011
A second film trailer for Roland Emmerich's film, Anonymous, was posted on YouTube August 5, 2011. Emmerich's historical thriller about the Shakespeare authorship controversy is scheduled for wide-release in the U.S. October 28, 2011. A preview will be screened on Sept. 7, 2011 in downtown Portland, Oregon as part of the Shakespeare Authorship Research Centre's annual conference September 6-9, 2011. Anonymous will also be featured at the Toronto International Film Festival to be held September 8-18, 2011.


Emmerich's film has Stratfordians aflutter, fearing examination of the traditional attribution of Shakespeare's plays may damage the brand. Instead of welcoming interest in Shakespeare's life and times, they are boarding up the windows against a flood of inquiry. The previously taboo topic of Shakespeare authorship is now allowed in the hallowed halls of Stratford-on-Avon so that a rear guard action against apostasy can be mounted. Paul Edmondson, Head of Resea…
Read more

Promo material on the publisher's page says:
Whether you are a firm believer that Shakespeare wrote Shakespeare, or suspect that he didn't, this book aims to enable readers to gain a more comprehensive knowledge of the problems at hand, clarify their thinking, and identify weaknesses in, and logical rebuttals to, the arguments of their opponents, as well as potentially strengthening their own.Ros Barber, PhD is the author of The Marlowe Papers (St. Martin's Press, 2013) that won the Hoffman Prize in manuscript in 2011.

UPDATE 11/17/13: A note published today by Ros Barber at http://rosbarber.com/shakespeare-evidence/ says the first installment of the Shakespeare: The Evidence ebook will be published on November 26, 2013.
UPDATE …
Read more

By Linda Theil September 07, 2011
Sailors in the Shakespeare authorship sloop are an independent crew used to charting their own course, but even among this notoriously self-confident coterie, James Warren astounds us with his initiative.

The Sacramento native has lived overseas for the past 20 years, most recently in Pakistan and Vietnam, serving as a Foreign Service Officer with the U.S. Department of State. When he became interested in the Shakespeare authorship mystery, he created a tool that he needed for his research. Warren explains: I became aware of the authorship issue about five years ago, and since then focused on acquiring and reading many books on it and Edward de Vere. I hadn’t paid much attention to the (Shakespeare Oxford Society and Shakespeare Fellowship websites. . . . However, after joining the SOS and SF earlier this year, in March I learned about the SOS newsletter, SF’s Shakespeare Matters, The Oxfordian, Brief Chroniclesand other publications all at the same time, and was almost overwhelmed by t…
Read more

Oberon meetings are held at 1:30 on the second Saturday of the month at the Bloomfield Twp. Library at 1099 Lone Pine Rd., Bloomfield Twp., MI. Meetings are open to the public.
Our next meeting is scheduled for 1:30 p.m. Saturday March 14, 2020 at the Bloomfield Twp Library, 1099 Lone Pine Rd., Bloomfield Twp., MI. We are also scheduled for May 9, 2020; Sept. 12, 2020; and Nov. 14, 2020.
Shakespeare Identified Centennial!
Oberons are planning a special event to celebrate the centennial of the publication of Shakespeare Identified by J. Thomas Looney with a luncheon at Paesano Wine Bar and Restaurant in Ann Arbor at 1 p.m. April 11, 2020. The public is invited, cost $25. To make reservations, email oberonshakespearestudygroup@gmail.com
SOF Annual Conference!
The next Shakespeare Oxford Fellowship Conference will be held Oct. 1-4, 2020 in Ashland OR
Please watch this space for further meeting information.