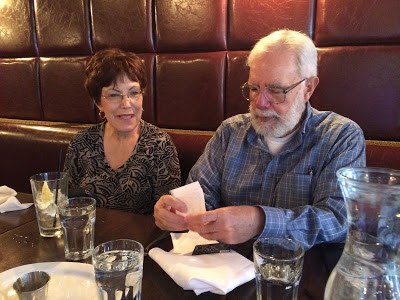 The obituary of our colleague Reinaldo Perez (1944-2016) has been published at Legacy website and will appear in the Detroit News and the Detroit Free Press today, January 15, 2017. Although no information regarding memorial services is yet available, Perez' obituary informs us that his cremated remains will be interred in Orlando, Florida.

Perez' obituary was compiled by his longtime friend, Terry Shaw, who is also known to Oberon members. In her memorial essay, Shaw relates a story of Rey's final day before entering St. Joe Mercy Hospital Ann Arbor on October 26, 2017 where he passed away on December 12, 2016 due to complications from heart surgery. Shaw said:


The night before his surgery [Rey] spent several hours writing a vigorous response to a recent book about Shakespeare, resulting in only four hours of rest before he entered the hospital. He never spoke or wrote again.

Before departing for the hospital that morning, Rey sent us all an email of his heartfelt response to the news that the Oxford University Press new edition of Shakespeare’s complete works credits Christopher Marlowe as co-writer on Shakespeare's Henry VI plays -- a topic that we Oberons had been sharing emails about. (See more information on this news in the Oberon weblog posting "New Oxford Shakespeare adds Marlowe as co-writer".)

Because we value his voice and miss his presence, we share Rey Perez' final communication with us, here:

Wanted to share a few preliminary comments ("preliminary" is a euphemism for "might be wrong and I might need to take them back after reading more on the matter") about Marlowe as co-author with Shakespeare of the Henry VI plays.

-- rightly or wrongly that Marlowe is being given credit as co-author with Shakespeare of the three Henry VI plays, as published by a major publisher such as Oxford University Press, is a major development.

-- I agree with Richard [Joyrich] that it seems an attempt to bridge the gap between the lack of literary evidence connected with William Shaksper of Stratford and the works of Shakespeare the writer. We heard some mention of collaboration in brief comments made by Paul Edmondson at the Stratford, Ontario lecture that some of us attended.


"Speculation on whether Marlowe collaborated on the plays stretches back to the 18th century. About two dozen scholars contributed research for the new volume. They used the latest tools in text analysis to investigate the works.

For the New Oxford Shakespeare scholars ran tests to determine whether authors like Marlowe could be reliably identified by the ways they used language — like frequent use of certain articles, and certain words commonly occurring in a row, or being close to each other in the text. Once this was determined, researchers applied these patterns back to texts, to see if they suggested an author other than Shakespeare. If results came out positive, further tests were run."

That is, they looked at Marlowe's writings and compared them to the works of Shakespeare.  As Tom [Townsend] mentions, there are no writings by the Stratford Man!

-- So, if we were to accept the conclusion of the textual study, namely that there are textual parallels between the plays and poems of Shakespeare and the writings of Marlowe, we Oxfordians can therefore conclude that this could be the result of collaboration between Oxford (aka Shakespeare) and Marlowe, or that one or the other borrowed or was influenced by the style of the other. That there are parallels between Marlowe's writings and the plays and poems of Shakespeare does not by itself depend on the identity of who Shakespeare was. Is there any evidence that Oxford and Marlowe met or knew each other?  As playwrights they likely would have known each others' works.

-- Might the text patterns identified as comparable between the works of Shakespeare-Oxford (de Vere) and the works of Marlowe be evidence of Marlowe's borrowing, imitating, or being influenced by the works of Shakespeare?  Shakespeare-Oxford (de Vere) was 14 years older that Marlowe. When there are textual similarities between works of two authors who overlapped in time how does one determine which is the author and which the co-author of specified passages? (This point could be invalidated if the diagnostic textual patterns are common and widely found throughout the works of one of the authors, but only found in one or a few passages among the works of the other. Hence the need to read the original study and not just the NYT article!)

-- Nevertheless, again, if we were to accept the results of the textual study, then we can indeed propose that it is Shakespeare-Oxford who should be listed as co-author of some of the works of Marlowe. Haven't eminent, tenured, published scholars identified textual patterns present in some works of both? I mean, what else can we laymen do but accept the truth from on high?