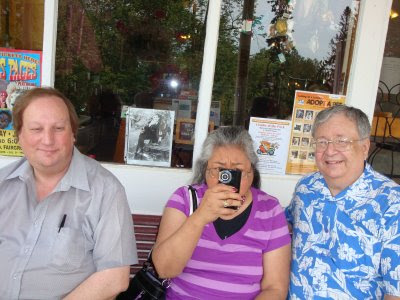 Happy days together: Tom Hunter (on right) with Rosey and Richard Joyrich at Horton Bay General Store, Horton Bay, Michigan during an Oberon Up-North excursion in the summer of 2009

As some of you may have heard, Tom Hunter suffered a massive cardiac event last Friday afternoon while sitting outside of his cottage on the shores of Northern Michigan's Torch Lake, considered one of the most beautiful lakes in the world.

After a (mercifully painless) hospitalization in Traverse City Tom departed this world at around 3 AM this morning.

Although our local group, Oberon, was started in 1999 by Barbara Burris and myself and Tom joined us a little later, he has become (in my opinion at least) the soul of our group. He has served as our Chair for these many years and has kept us on track and helped build Oberon into a well-respected local Oxfordian group (of course I don't want to take away from all the great efforts of many of you).

Tom's death is a great loss for Oberon, as well as for the Oxfordian world in general. Tom has been very active in doing research and has published many papers in Oxfordian newsletters and other media outlets. He has presented many papers at our national conferences. In fact he was scheduled to give half of a presentation at the upcoming conference in two weeks in Washington, DC. Luckily (for Oxfordians) Tom Townsend will be able to present both his own and Tom Hunter's parts of the presentation so that Tom's latest contribution will at least be heard. I only regret the loss of any future great work from Tom.

I can take a little comfort in the fact that Tom was able to see the movie Anonymous at a special preview event last Thursday at the University of Michigan, a movie poised to revitalize interest in the Authorship Question. Again, I'm just sorry that Tom will not be able to directly experience what I feel will be very interesting times ahead for all of us.

My heart and prayers go out to Tom's wife Rosey and his daughter Lisa as well as his large extended family.

Finally, I am comforted with the knowledge that at last Tom knows the truth about the origins of the Shakespeare canon, a truth we should (with Tom's example) continue to pursue for ourselves.

"Now cracks a noble heart. Goodnight sweet prince,
And flights of angels sing you to your rest"
Hamlet, Act V

I first came into contact with Tom in 2007, when some discussion on Nina Green’s email discussion forum Phaeton, which I had recently joined, took up tOche issue of who Nashe was referring to in his Preface to Greene’s Menaphon [http://www.oxford-shakespeare.com/Nashe/Preface_Greenes_Menaphon.pdf p. 6] when he alluded to the King of Fairies….
“Our local authorship discussion group Oberon has recently been asking why we had that name. Why would we name ourselves after the King of Fairies?  As founding members recall, the name was introduced by another member who since disappeared, but they couldn't remember why.We asked what relevance the name had to anything we did.

Then came a brief excerpt from p. 43 of a manuscript by Heward Wilkinson which he forwarded to me and did offer to the readership of Phaeton at large:

I haven't had time to consult the reference cited, but here Dr. Wilkinson appears to solve not only the identity crisis of our discussion group--we were named after the original de Vere--but also potentially identifies "the King of Fairies" in Nashe's reference as Oxford himself in the derived identity of his predecessor.  Do we have here then a precious insight into the life of Shakespeare, a snapshot of actors anticking up and down the country with their benefactor?”

Apart from not only generously appointing me Doctor, four years before I attained that standing, we have here the brilliant, Autolycus-like, knack of seeing connections, and valuing unexpected sources, that ‘snapping up of unconsidered trifles’, yet in the light of a sturdy commonsense, which made it such a joy to collaborate creatively with Tom. There was always a sense of very deep recognition and appreciation, which was entirely unfeigned, and which extended to the Oberon group as a whole, in my experience, - to whom, as well as to Tom’s family, our hearts go out.

Just the last few weeks I found myself again collaborating with Tom, taking up a serious challenge from Stratfordian Mark Johnson, on the Linked-In discussion of ‘Is Shakespeare a Fraud?’ concerning whether the appearance of the recognitions of Shakespeare as a Gentleman, (Mr., M., Gent., etc.), had ensued, following the Stratfordian’s acquiring that status in 1601. Tom rapidly found a 19th century tome, and followed up both the legitimate Shakespeare Quartos and the Apocryphal ones, while I followed limply in his wake, posting the results on Linked-In! King Lear, in 1608, turned out to be the earliest Quarto with this designation. So, then we began to turn our attention to the earliest reference to ‘Mr. Shakespeare’, in the Parnassus plays (c1601-2), and meanwhile we were digesting Peter Dickson’s Bardgate, which arrived on our doorsteps roughly simultaneously, and exchanging banter about our respective presentations at the Shakespeare Authorship Conference, and I went so far, in my vanity, as to burden Tom with a glimpse at a draft of my presentation, and I was just beginning to wonder why he had not replied – when this terrible news came in…

A couple of glimpses of Tom from this correspondence:

“Heward, has there ever been a conference draft that didn't need pruning? I had a chance to visit my library and almost immediately came up with Tucker Brooke's The Shakespeare Apocrypha (1908).  This does have reproductions of the title pages of some 14 plays.  I will get the information off to you asap.  I am curious where you are wanting to take this inquiry.
Tom”
“Heward,
I took a serendipitous journey through a pile of papers on my desk and found the Fall 1999 Shakespeare Oxford Newsletter Vol 35, No. 3.  In it was Part II of Robert Brazil's "Edward de Vere and the Shakespeare Quartos."  You could always count on Robert to come up with something when you needed him.  I am sure that is available on line along with Part I, which I presume was in the previous newsletter.  If you have not seen this yet, I believe it will be worth while for you to take a look. Am not sure I can meet the two week target for Parnassus.  For one thing, I thought I had all three but I could only find Return from Parnassus on my shelves.  Perhaps these are also available on line? Am still preparing for the Conference.  As usual, these projects always become larger than they seem at the outset.
Tom”

And so there I was, looking forward delightedly at last to meeting Tom in person at the Conference. But here I turn to Dr. Johnson, who says it all so much better than I can [Life of Edmund Smith: http://www.online-literature.com/samuel-johnson/3217/ ]!

“Of Gilbert Walmsley, thus presented to my mind, let me indulge myself in the remembrance. I knew him very early: he was one of the first friends that literature procured me, and I hope that, at least, my gratitude made me worthy of his notice.
He was of an advanced age, and I was only not a boy; yet he never received my notions with contempt. He was a whig, with all the virulence and malevolence of his party; yet difference of opinion did not keep us apart. I honoured him, and he endured me.He had mingled with the gay world, without exemption from its vices or its follies, but had never neglected the cultivation of his mind; his belief of revelation was unshaken; his learning preserved his principles; he grew first regular, and then pious.His studies had been so various, that I am not able to name a man of equal knowledge. His acquaintance with books was great: and what he did not immediately know, he could, at least, tell where to find. Such was his amplitude of learning, and such his copiousness of communication, that it may be doubted whether a day now passes in which I have not some advantage from his friendship.At this man's table I enjoyed many cheerful and instructive hours, with companions such as are not often found; with one who has lengthened, and one who has gladdened life; with Dr. James, whose skill in physick will be long remembered; and with David Garrick, whom I hoped to have gratified with this character of our common friend; but what are the hopes of man! I am disappointed by that stroke of death, which has eclipsed the gaiety of nations, and impoverished the publick stock of harmless pleasure.”

By Linda Theil
A second film trailer for Roland Emmerich's film, Anonymous , was posted on YouTube August 5, 2011. Emmerich's historical thriller about the Shakespeare authorship controversy is scheduled for wide-release in the U.S. October 28, 2011. A preview will be screened on Sept. 7, 2011 in downtown Portland, Oregon as part of the Shakespeare Authorship Research Centre 's annual  conference September 6-9, 2011 .  Anonymous will also be featured at the Toronto International Film Festival to be held September 8-18, 2011. Emmerich's film has Stratfordians aflutter, fearing examination of the traditional attribution of Shakespeare's plays may damage the brand. Instead of welcoming interest in Shakespeare's life and times, they are boarding up the windows against a flood of inquiry. The previously taboo topic of Shakespeare authorship is now allowed in the hallowed halls of Stratford-on-Avon so that a rear guard action against apostasy can be mounted. Paul Edmo
Read more

By Linda Theil
by Linda Theil Ros Barber's Shakespeare: The Evidence --The Authorship Question Clarified will be published Nov. 24, 2013. Info at  https://leanpub.com/shakespeare . Video promo for the book (above) is available on YouTube at Shakespeare: The Evidence. Promo material on the publisher's page says: Whether you are a firm believer that Shakespeare wrote Shakespeare, or suspect that he didn't, this book aims to enable readers to gain a more comprehensive knowledge of the problems at hand, clarify their thinking, and identify weaknesses in, and logical rebuttals to, the arguments of their opponents, as well as potentially strengthening their own. Ros Barber, PhD is the author of The Marlowe Papers (St. Martin's Press, 2013) that won the Hoffman Prize in manuscript in 2011. UPDATE 11/17/13 : A note published today by Ros Barber at  http://rosbarber.com/shakespeare-evidence/  says the first installment of the  Shakespeare: The Evidence  ebook will be published o
Read more

By Linda Theil
James Wheaton reported yesterday in the Jackson Citizen Patriot that the Michigan Shakespeare Festival high school tour of Romeo and Juliet was criticized for inappropriate content -- " So me take issue with sexual innuendoes in Michigan Shakespeare Festival’s High School Tour performances of ‘Romeo & Juliet’" : Western [High School] parent Rosie Crowley said she was upset when she heard students laughing about sexual content in the play afterwards. Her son didn’t attend the performance Tuesday because of another commitment, she said.  “I think the theater company should have left out any references that were rated R,” Crowley said. “I would say that I’ve read Shakespeare, and what I was told from the students, I’ve never read anything that bad.”  She said she objected to scenes that involved pelvic thrusting and breast touching and to a line in which Mercutio makes suggestive comments to Romeo after looking up the skirt of a female. The problem with cutting out the naug
Post a Comment
Read more