By Linda Theil March 16, 2009
Matt Cossolotto sent this link from a fellow Oxfordian that he said could be shared "at will". The link shows the face in the Cobbe portrait morphed into the face in the Droeshout engraving from the First Folio. While I don't place a lot of credence in the validity of this technique in general, this instance highlights the similarities between the faces -- specifically as the author says: the eyes.

That wall-eyed look of the Droeshout is echoed in the Cobbe portrait. 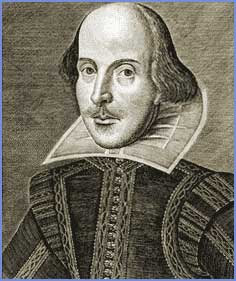 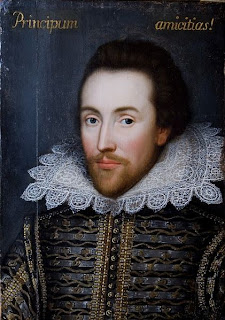 But the reason the morphing interested me was that one of the first things I noticed about the Cobbe is the similarity between the doublets in both portraits. The Cobbe has the same buttons, the same general design and that same odd look to the left sleeve that has engendered so much discussion in the past -- at least among dissenters.

And the faces do have similar general characteristics: The long, narrow shape, the high-domed forehead, the long, attached earlobes, the deeply cut upper lip, pouting lower lip and general softness about the mouth. Add those high-arching brows and wide-eyed look, and you can begin to see that the goofy guy in the Droeshout might have something in common with the charmer in the Cobbe.

And those characteristics are echoed, again, in this 1618 Mytens portrait of Henry Wriothesley, Third Earl of Southampton -- and purported sonnet inspirer -- and Wriothesley ca. 1603 in a portrait by John de Critz. 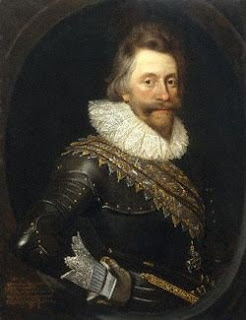 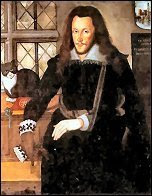 And since the Cobbe proportedly belonged to the Wriothesleys, maybe it IS Southhampton.

But if it is Southhampton, why would Southhampton's picture be in the First Folio? No sonnets there.

In any case, does the Cobbe have ANYTHING to do with the Droeshout? I never used to care much one way or the other about the Droeshout, but now I'm a little curious.

By Linda Theil April 08, 2011
Rhys Ifans as Oxford in Anonymous Yesterday Sony released the teaser trailer for Roland Emmerich's film, Anonymous , about the Shakespeare authorship question. The trailer features a montage of images from the film, voice-over by anti-Stratfordian actor Sir Derek Jacoby, and scoring of the Radiohead song "Everything in its Right Place". The teaser is everywhere on the web with several links on YouTube , citations in entertainment news magazines , and on several Facebook pages including Ben August's Edward de Vere -- Shakespeare page that has a growing fan-base of thousands. One demoralized Stratfordian blogger posted a message titled "Anonymous trailer" with only one line: "I'll just leave this here without comment." Also several entertainment news sites posted articles this week claiming that Emmerich expects trouble from Stratfordian protesters. A site called Contact Music titled their report, "Roland Emmerich Expects Fury over Sha
Read more