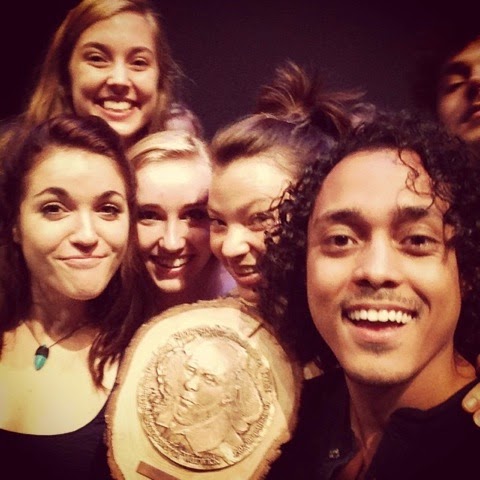 Actor Michael Scott and cast members of the New Orleans Shakespeare Festival production of A Midsummer Night's Dream display their plaque made from a cedar that grew in the garden of Shakespeare's birthplace. Photo courtesy Michael Scott

Accompanied by Paul Prescott, associate professor of English at the University of Warwick, and supported by a truly splendiferous array of mobile media, the Shakespeare missionaries began their tour on the Fourth of July in Kansas City and will end September 1 in Washington DC. A listing of their itinerary is included at the end of this post.

Along the way, we speak to actors, audience members, creatives, community organizers, philanthropists and hot-dog sellers about what Shakespeare means to them and their community. During the next two months we will be gathering together material for a radio documentary, a book, and the international collections of the Shakespeare Centre Library and Archive.

Along their pilgrimage road, Edmondson is presenting each festival organization with a relic of the True Cedar Tree guaranteed to sustain American Shakespeare-lovers against anti-Stratfordian temptation.

We will be doing talks at each of the festival venues, telling the story via social media and presenting a 450th birthday gift to each of the festival partners in the form of a plaque from a cedar tree that used to grow in the garden of Shakespeare’s Birthplace (it had to be felled because it was becoming a danger to public safety). We are delighted that Greg Wyatt (Sculptor in Residence at St John the Divine Cathedral, New York) has designed, made and donated these beautiful objects.

Shakespeare on the Road just presented our company with a cedar plaque made from a tree that grew on the grounds of the Shakespeare Birthplace Trust in Stratford-Upon-Avon. They are here to experience the New Orleans Shakespeare Festival on a journey to explore Bard in the USA. Follow their journey at www.shakespeareontheroad.com. Come see the last two shows of a Midsummer Night’s Dream this weekend. Tickets at www.neworleansshakespeare.org at The Shakespeare Festival at Tulane.

Edmondson and Prescott are accompanied on their trip by new media gurus A.J. and Melissa Leon of Misfit, Inc. who say on their website:


We have traveled all over the globe and produced workshops for brands and organizations that are dead serious about using the web to tell compelling stories, connect with their tribe and solve interesting problems. Our workshops are not cheap, but they will help you to take over the world.

Jonathan Fields on the Good Life Project website refers to the couple as ". . . a tactical strike team for really interesting organizations."

The entire trek is being documented on the Shakespeare Birthplace Trust site Blogging Shakespeare, as well as a site dedicated to the project called Shakespeare on the Road. Edmondson and Prescott are sending dispatches from the heartland posted daily to the site, as well as sending messages via a Twitter account titled Bard in the USA @ShakespeareBT, and an Instagram identity, also Bard in the USA.
--
UPDATE: July 14, 2014