Joyrich honored by SOF at 2018 conference in Oakland CA

Joyrich displayed a clock presented to him by the SOF in appreciation for his 14 years of service to the organization. Joyrich was on the board of the Shakespeare Oxford Society from 2005-2012. He served as president from 2011-2012, and was first vice-president from 2009-2010. When the SOS became the Shakespeare Oxford Fellowship, he served on the board from 2013 through this year, serving as first vice-president from 2015-2017. He has served as conference committee chairperson for the SOS/SOF from 2005-2018.

Oberons congratulate our chairperson Richard Joyrich, and the SOF for their acknowledgment of the talents and skills of our highly esteemed colleague. We are proud of you, Richard. 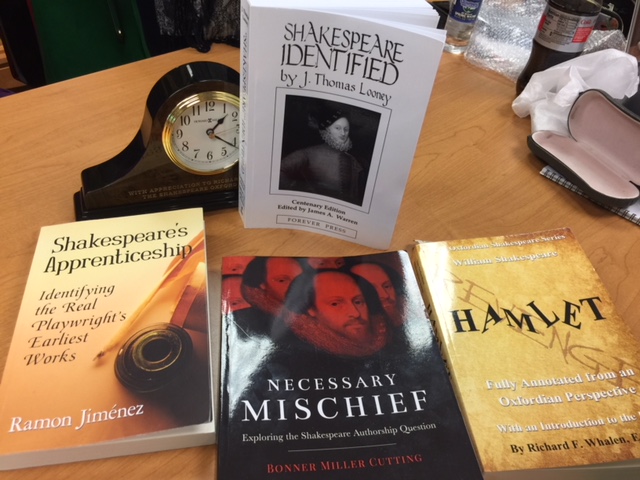 Joyrich also brought back from the Oakland conference four newly released books. Each represents years of work and study by modern luminaries of the Shakespeare authorship inquiry:

Oberons were sad to hear of the passing of Dan Wright, PhD, on October 5, 2018 in Vancouver, WA

Professor Wright was former director of the Shakespeare Authorship Research Centre at Concordia University in Portland, OR. Information about his memorial service is available on the SOF website at "Memorial Service for Dr. Dan Wright on November 14, 2018"

The disposition of Professor Wright's extensive library is being curated by James D. Gaynor of Khalil Research Group at the University of Washington.