Townsend's "Is Shakespeare a Pseudonym?"

We are pleased to welcome longtime Oberon member Tom Townsend as a guest blogger with his article "Is Shakespeare a Pseudonym?" L. Theil 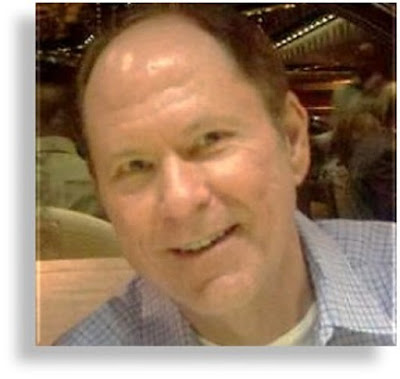 Is Shakespeare a Pseudonym?

This is not as preposterous a question as we’ll soon see: Thomas Vicars (c1590-c1641), was an early Jacobean vicar, who received a B.A. and subsequently an M.A. after attending Oxford University. (Note 1) Both degrees concentrated in Classical Languages, Greek and Latin.

He became a Vicar. To be clear, all vicars in early Jacobean England were in a difficult position, just as they had been in the Elizabethan era. All vicars, of course, were required to be completely honest all the time. This was not simply a matter of conscience but had also been mandated by the late Queen Elizabeth I. (Note 2) Further, vicars were required to answer to the Ecclesiastic Court. Here’s the situation: The Ecclesiastic Court reported directly to king James I. Therefore, as an example, vicars’ sermons were first censored (read: their speech was controlled). (Note 3) King James I, like Queen Elizabeth I before him, were Supreme Governors of the Church of England. (Note 4) He was the highest-ranking member of the Church of England, above Cardinals, Bishops, and finally vicars. Having the King as the ultimate overseer would be stressful for anyone, including Thomas Vicars.

Our Thomas Vicars wrote a book concerning outstanding English poets in 1624. Recall, Shakespeare’s First Folio was printed just one year prior to Vicars’ book, in 1623. (Note 5) It is possible as Vicars was concentrating on poets and may not have seen this book of Shakespeare’s plays. However, in his first edition of outstanding English poets, he does not mention Shakespeare as one of the poets. Of course, Shakespeare was a well-liked and popular English poet in this era. It’s implausible Vicars wouldn’t have known Shakespeare was a great poet. Shakespeare’s long poems Venus and Adonis (1593) and Rape of Lucrece (1594) were remarkably successful, resulting in 16 additional printings by 1640 (Note 6). Further, Shake-speare’s Sonnets had been published in 1609, and was another major poetic work which Vicars undoubtedly knew. (Note 7) Why didn’t Vicars include Shakespeare in his work concerning outstanding English poets? It can’t be because he merely forgot. After all  he incorporated virtually all other poets of the Elizabethan and early Jacobean era. It’s peculiar, at the very least. 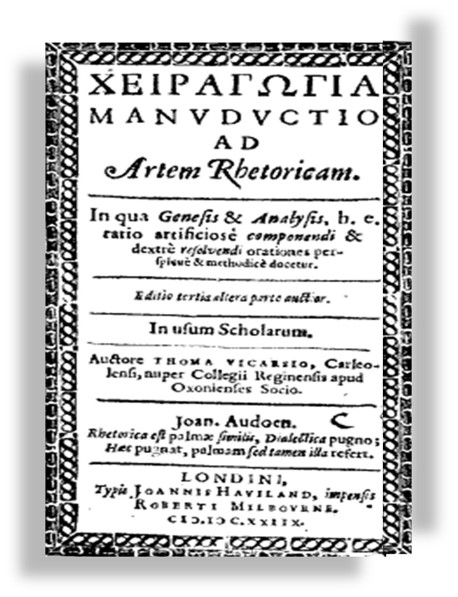 However, in 1628 Thomas Vicars’ publishes the 3rd edition of Manual of Rhetoric, Χειραγωγια: Manductio ad artem rhetoricam. Here he writes in Latin, “To these, I think, should be added that well-known poet who takes his name from the shaking and spear, John Davies, and a pious and learned poet who shares my surname, John Vicars.” (Note 8) (“Istis annumerandos censeo, celebrem illus poetam quo a quassatione & hasta nomen habet, Ioan Davisium, & cognominem meum, poetam pium & doctum Ioan Vicarium.”) (Note 9) In this is the enigmatic manner he adds Shakespeare’s name to his list of outstanding English poets.

Thomas Vicars appears to be consciously concealing the name Shakespeare rather than simply incorporating the name directly. By obscuring the name Shakespeare, his noble overseers should provide their approval—as they were unlikely to see any difference. But the strange arrangement of words allows him to be honest regarding what he Actually knows about Shakespeare. Such an unusual display is indicating he intentionally doesn’t want to use the exact name Shakespeare. Vicars evidently knew Shakespeare was a pseudonym and was indicating this with his eccentric word order. Otherwise, he would have included the Stratford Man’s name in his 1st edition of outstanding English poets under the name William Shakespeare and given no further thought to the issue. But Thomas Vicars’ obscure word arrangement is telling us Shakespeare is a pseudonym.

Now let us consider the opposition:

But consider: From his university education Thomas Vicars knew the procedures for converting untranslatable names into Latin. His education would have taught him that Latin was in the state of fluctuation: In England at this time, Vicars saw the continued rise of Protestantism helped by the printing press. Further, a dark shadow had fallen over Latin’s use because of the old Catholic mass. Moreover, there had been a great advancement in new vocabulary for the English vernacular. All this led to the decline, but not elimination of Latin’s use, alongside the ascent of the English language. In particular, the educated classes as well as religious groups were expected to understand Latin. (Note 11)

More rigorous Latinization of names was largely performed through the Middle Ages, such as dividing a name into parts or using phonetic sounds. (Note 12) In the 16th and 17th Centuries Latinization was principally used by scribes who used familiar Latin translations for names. (Note 13)

But our Thomas Vicars also follows yet another procedure, he simply writes in English for some of the names untranslatable to Latin. Look at Michael Drayton (1563-1631): He writes an English language paragraph describing his thoughts concerning Drayton and uses Michael Drayton’s name as it appears in English.(Note 16) But He also translates Drayton’s name into Latin using a standardized suffix, ium, as in Michaelem Draytonium. (Note 17)

Therefore, as we’ve seen, Thomas Vicars was highly adaptable in the methods used to transform English names into Latin. In fact, he writes his book in three languages: Greek, Latin, and English.

Nonetheless, it took him some time to develop a procedure to indicate Shakespeare was a pseudonym while also acknowledging his obvious compliance with the Ecclesiastic Court. While his peculiar method appears to have worked, his adaptation of the name Shakespeare doesn’t conform to any known pattern (at that time) of writing someone’s name in Latin or for that matter in English.

A second issue we need to consider: For his book Thomas Vicars uses all poets first names with surnames. No exceptions. Nonetheless, when Vicars authors his 3rd edition and writes, “…that well-known poet who takes his name from the shaking and spear…” (“…celebrem illus poetam quo a quassatione & hasta nomen habet…”) he never provides a first name. This is despite the Stratford Man’s first name was easily translated into Latin, Guiliamus  (William). (Note 18)  By providing only a last name (and in constituent components, no less) he is again signaling this poet is using a pseudonym and, as such, was not an Actual Person.

Another issue: No one would divide the name of an Actual Person into its constituent components and then translate it, as Vicars did. Why? Anyone thinking of any Actual Person thinks specifically about that Actual Person and not about their name, much less its components. An Actual Person’s name is simply sounds others memorize (Note 19). For example: no one would write of me, “that person who takes his name from the end-of-the-town.” After all that’s not my name. It’s Townsend. No one would recognize these components as an aspect of my name. Of course, this would also be true throughout history, including the early Jacobean era.

If the Stratford Man were Shakespeare, Vicars would (as we’ve seen) either add a paragraph in English as he did for Michael Drayton or Latinize the Shakespeare name with a standardize suffix plus he would have used his first name, William. As it stands in his book, he separates the name into its constituent components and translates those into Latin and offers on first name. But pseudonyms don’t behave like names of Actual People; they are simply words. There is no Actual Person behind a pseudonym; it is a disguise for someone who most frequently doesn’t want others to know. In contrast an Actual Person owns their name and never breaks it into its constituent components. In fact, it’s illogical to use the components to represent someone who is an Actual Person.

Therefore, Thomas Vicars is revealing Shakespeare was a pseudonym; specifically, he infers the name Shakespeare is not an Actual Person but obviously recognizes he’s a poet. Maybe he knows the identity of the poet using this pseudonym. Sadly, he was not at liberty to tell us.

3. Sermons were Censored in Elizabethan England, Shapiro, J., PhD, A Year in the Life of William Shakespeare, p. xvi.

19. I have performed substantial nomenclature research and have consistently obtained the result discussed here (also applies to products).